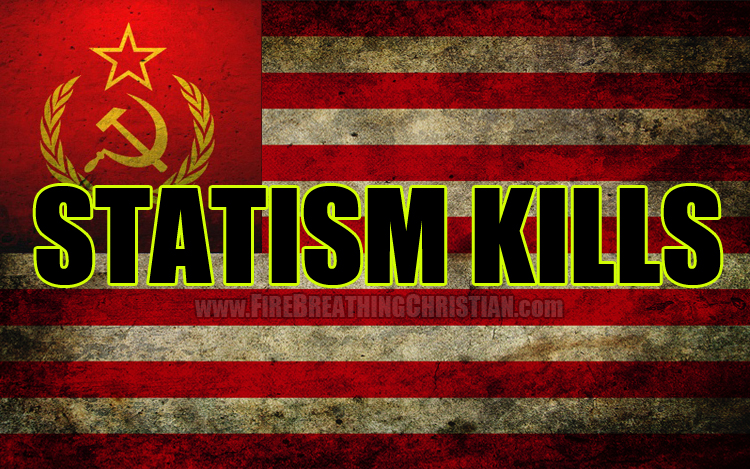 Why are we so prone to make an idol out of the State?

Why are we so inclined to embrace the State as our ultimate provider and sustainer here in “the real world”?

Why are we so automatically and unconsciously disposed to make the State our God in practice?

The religion and worldview of Statism has been a core component driving human history since before the time of the tower of Babel. The desire for men to come together apart from the word of God and build cities, cultures and civilizations dedicated to establishing and exalting the name and fame of the collective has been a defining characteristic of human nature since The Fall.

Now the whole earth had one language and the same words. And as people migrated from the east, they found a plain in the land of Shinar and settled there. And they said to one another, “Come, let us make bricks, and burn them thoroughly.” And they had brick for stone, and bitumen for mortar. Then they said, “Come, let us build ourselves a city and a tower with its top in the heavens, and let us make a name for ourselves. . .”

“A name for ourselves.”

Or the Soviet Union.

All are peripherally varied expressions of the same core concept: “We the people” can come together to make law, pursue civil government, and build culture based on what we feel and believe to be best apart from explicit connection and subjugation to the Nature of God as revealed in His Word.

That’s the basic idea behind Statism, be it Roman, Babylonian, Soviet or American in flavor.

And that’s why all Statist empires inevitably fail and fall in God’s creation.

Like it or nor, believe it or not, and submit to it or not, God’s Word is and always shall be binding upon every physical corner and immaterial concept within His creation, and anyone – individual or collective – presuming to build upon anything but the Rock of His Nature as the foundation for law, government, economics, art, and everything else, is begging for the ultimate collapse of their little exercise in self-referential rebellion.

No matter how many generations or even centuries the rebellious exercise in question may appear to thrive and prosper, it will inevitably fall, often times quickly and very, very hard, causing great pain to many on its way into the ash heap of God’s creations of time and history.

So how fast can the U.S. fall?

I’m just old enough to vividly recall a world in which the Soviet Union was the great, terrible and sure to be around for a very, very long time “evil empire”. A great deal of American and global culture was shaped around the “fact” of Soviet vitality and strength. For my entire childhood and into my high school years, the Soviet Union was a sad fact of life; an ulgly part of reality that had every appearance of going on forever and, quite possibly, taking over the world.

At least that was the spin we were fed by pagan propagandists at every turn for generations in America, going back many decades before I was even born.

The Soviets Union was huge – it covered about 1/6 of the surface of the earth – and it had a gigantic military that was seemingly on the march here, there and everywhere.

Its more overtly communistic brand of Statism was heralded as a beautiful and unstoppable force by intellectuals throughout the West.

Its power was the object of awestruck adoration and admiration from even the majority of those who hated its core identity.

And then, one day, it just sort of imploded.

The Berlin Wall came down, and that was pretty much it.

In what seemed to be a flash, the “invincible” global superpower known as the U.S.S.R. was gone. Dead. Finished.

There are lessons from this relatively recent historical example for us to hold close as we watch the American spin a Statist empire come crashing down around us.

How fast can America fall?

Well…let’s consider some of the things that we in America are programmed and encouraged to hold dear as “rights” (often even calling them “God-given”) and protect through what we call “law”:

We the People celebrate the “right” to openly promote and profit from “legally” protected businesses built upon the marketing of adultery.

We the People claim the “right” through the power of the State to confiscate the property of our neighbor (through property tax) so that we can fund our precious public schools (which are, in fact, Temples of Statism), which happen to be built upon the satanic approach to the pursuit of knowledge first pitched in Genesis 3 and also happen to spawn from the tenth plank of the Communist Manifesto.

We the People also claim the “right” to divorce on demand, the “right” to marry anyone we like (same sex or otherwise), and, of course, the “right” to openly and “legally” operate a mass child sacrifice system whereby we exercise the “right” to kill our own children on a scale that would make past collective Statist empires like Nazi Germany blush. (See also: 51,000,003 reasons why America owes Nazi Germany an apology.)

So How long does the American Statist empire have left? How soon might it implode? How quickly might it finish itself off in its proud, suicidal rage against the binding Law of God and the actual, real-world authority of King Jesus?

The better question seems to be, “Why haven’t we been squished and snuffed out under the grinding heel of God’s righteous judgment already?”

That’s the question we oughta be asking…as we repent and beg for mercy from the Christ we refuse to have rule over us in educational, economic, political and legal practice.

How long will it take a proud, unrepentant America to fall under the immeasurable weight of its rebellion against God?

And try not to blink.