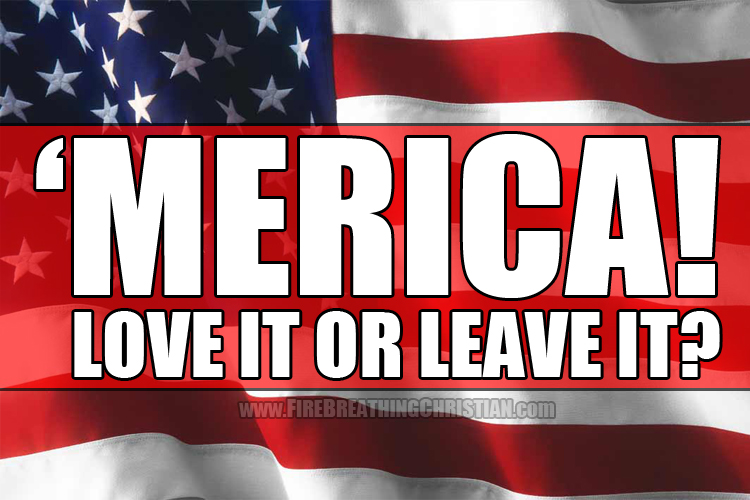 ‘Merica! Love it or leave it!

How many times have you heard that one?

More specifically, how many times have you heard some version of that line in response to any serious biblical testing of America in light of Scripture, however reasonable and respectful said testing may be?

While there are definitely contexts in which a “leave it if you don’t like it” response may be in order, vigorously testing America and all things American in light of Scripture is not one of them.

Yet reflexive defense of America and its icons, symbols, and traditions from biblical critique has become the norm in America…which, in and of itself makes plain that we have become fairly glaring, rank idolaters. We have made an idol out of the American State.

Which is, of course, precisely what the American State would have us to do, and why it does everything it can to instill a State-centered, anti-Christ worldview in which the State is god in practice and Christianity is…well…something to be endured only as much as necessary until it can finally be “educated” out of the American citizenry altogether.

Clearly, we live at a time in which American pride, arrogance, unrepentance and open idolatry of all things red, white and blue has reached such a fevered pitch that even (and often especially) many self-identified conservative Christians are often the most incensed and imbalanced at the suggestion that America may have become not only something less than a shining pillar of virtue and goodness, but actually something quite evil in many fundamental ways and on a scale never before witnessed in human history.

For these folks, to love America is to embrace and adore it with little, if any, critical examination, and certainly not much in the way of biblical testing.

This is what generations of American State-managed “education” has led us to be: Complaint, cowardly, subservient little drones.

Or, to put it even more bluntly: Slaves.

We’re slaves of the State, and we have been conditioned to love our bondage.

It’s in this context that I offer for your consideration an answer to the “Love it or leave it!” line, first noting a couple of telling presuppositions displayed in the way this question/challenge is usually issued:

With these points noted, one seemingly viable answer to the “Love it or leave it!” line is this:

Put another way: Love Him or leave it!

Put another ‘nother way: If you do not repent and submit to Christ as King in practice, be assured that you will be driven from His land and that land will ultimately be given to His faithful people.

You will love Christ as King.

Or you will be leaving His land.

I hope that this clarification is helpful.