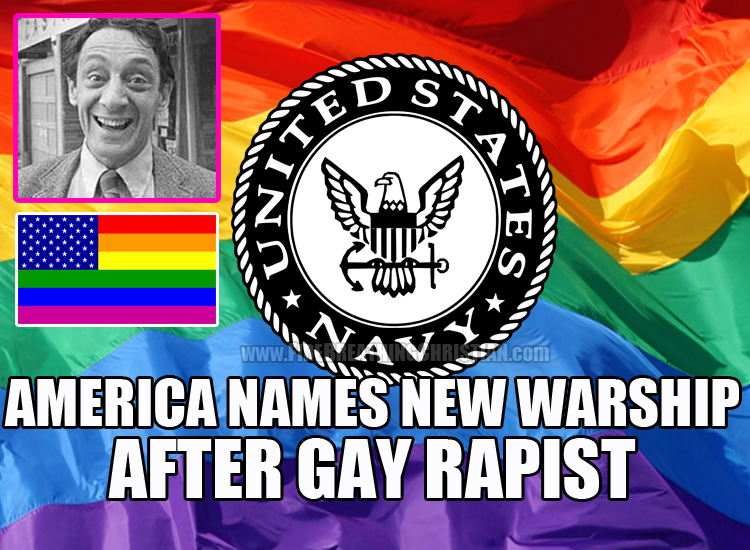 How evil is America?

How vulgar, vile, and openly at war with the God of creation have “We the People” become?

While most Americans (especially most self-identified “conservative Christians”) are desperately anxious to avoid such questions, for those of us interested in dealing seriously with these important things, a great (and readily available) place to look for some answers is to America’s favorite idols.

The state of these three idols can and will tell us much about how far down a path of suicidal insanity we’ve gone and how far we’re likely to continue.

For those who are willing to face hard realities so that true, Christ-centered solutions might be pursued, there was an interesting development on the US military front last week, when it was reported that the Navy is going to name one of its new ships after a well known gay rapist and politician by the name of Harvey Milk.

In Navy Ship to be Named After Pederastic Rapist Harvey Milk, The New American provides the following details (with bold emphasis added):

What do you get when you statutorily rape teenage boys? A prison sentence? Scorn and ostracism? If you’re “homosexual rights activist” Harvey Milk (shown), the answer is a U.S. Navy ship named in your honor. . .

Former Louisiana governor Edwin Edwards (D) once quipped before his 1983 gubernatorial contest that the “only way I can lose this election is if I’m caught in bed with either a dead girl or a live boy.” It appears that at least one of those eventualities is no longer a disqualifier for public office — or for being honored by those already in it. And when we’re naming Navy vessels after pederastic rapists, we have to wonder for how much longer the good ship America can stay afloat.

Back in December we made one of our typical wildly unpopular posts on the subject of the US military, entitled How can a “broke” country have the biggest military in the world?

Therein we shared the following, which seems worthy of reconsideration in light of the US Navy’s pending launch of the USNS Harvey Milk:

May God grace His people with the zeal, passion and opportunity to stand firm for Him even as the forces of American Empire ramp up and come crashing down all around us.

That empire is dying.

The Kingdom has come.