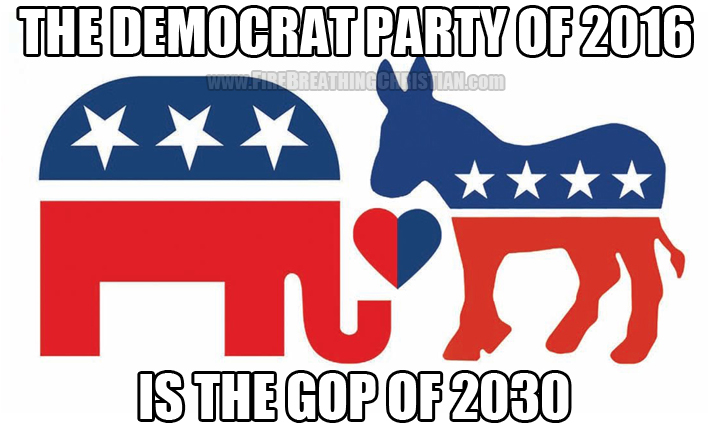 As we roll into the home stretch of the American Political Puppet Show‘s 2016 season, one thing is clear (or should be clear to anyone with two brain cells to rub together): The Republican and Democrat Parties are, especially at the national level, two wings of the same dragon.

They are two heads of the same beast, two flavors of the same sludge, and two means to the same end. (With that end being the promotion of secular Statism.)

Oh sure, they regularly and sometimes quite smoothly play the “good cop, bad cop” routine, and yes, the Republican flavor of Statism seems to maintain a pace roughly 15-20 years behind its Democrat partner in crime in order to maintain a mirage of “conservatism”, but at the end of the day they are both leading us by the nose toward the same ultimate goal.

Where only “flat out commie pinko Leftist Democrats” stood on things like homosexuality and the redefinition of family just a generation ago, the Republican Party of today champions for LGBTQ inclusion, family redefinition, and the preservation/expansion of such “helpful” things as the Welfare State.

Where overtly satanic/Marxist constructs like State-run children’s “education” (aka “public schools” or, better put, Temples of Statism) were once unthinkable to American “conservative Christians”, they are now cherished icons and vigorously defended gems of a Republican Party worldview in 2016 America.

It is now the Republican Party that routinely joins the Left in defense of all manner of Big Government Orwellian Statism.

It’s now the Republican Party that has joined the Left in its war on family, marriage, and even the very meaning of gender.

It’s now the Republican Party that increasingly marginalizes those who proclaim and pursue a biblical worldview while increasingly soliciting, encouraging, and promoting anti-Christian LGBTQ perspectives.

Which might make one wonder what the GOP will be “standing for” 15-20 years from now.

But there’s no need to wonder, really.

No need at all.

I have a two word answer:

Wanna know what the American Republican Party, if left on its present course, will be championing 15-20 years from now?

The GOP will be doing then what she is doing now.

The same rationalizations, spin, and “lesser evil” march that got us to the point of Trump vs. Clinton as this year’s American Puppet Show rendition of the GOP/DNC two-step to hell will almost certainly have a Hillary level (or worse) representative in the Republican slot come 2032.

And you know what that means…

Because the 2023 Democrat nominee will be even worse than that Hillary Clone, of course.

All of this assumes that The American Political Puppet Show has a 2032 season, which, despite all that the System might tell you to the contrary, is no sure thing.

Whether the show lasts through a 2032 season or not, we need to recognize it for what it is and live accordingly.

For more on the beauty that lies ahead through that approach to life, please consider reading The Kingdom of God vs. The (Collapsing) Empire of America and As America Begs For Tyranny To “Save It”, The Kingdom Of God Advances On All Fronts.