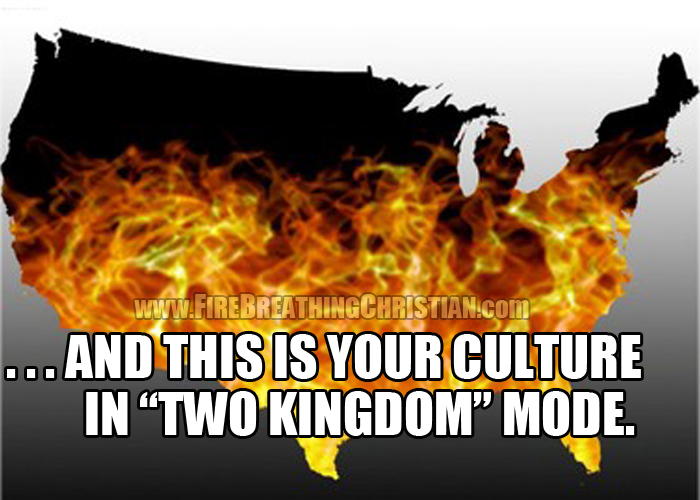 “Jesus is Lord over all or He isn’t Lord at all.”

Heard that one before?

Funny thing is, I usually hear it from Americanized Evangelicals who rather emphatically do not believe that Jesus is Lord over all sorts of things – like politics, economics, business, art, law, games, sports, civil government, and children’s education right here and now in “the real world” – while still strangely insisting that Jesus really is “Lord” over…something…

…in a “spiritual sense”, of course…

He’s definitely Lord over something somewhere “out there” in some “spiritual realm” or way off in the far flung future or in their church buildings, prayer closets, or precious little hearts.

…but He’s absolutely not Lord over their children’s education right here and now.

Or law and science and art right here and now.

Oh no, Jesus most definitely isn’t Lord over any of those things.

Which means what then, exactly, according to their own goofy little toothless slogan?

Yep, you guessed it: Jesus isn’t Lord at all.

This Jesus who isn’t Lord over law, politics, civil government, art, education, economics and business is not really Lord at all. He’s just another phony savior. Just another pretend god. Just another man-made fiction; an idol to enable men to act as their own little lords over each of these realms while claiming some sort of fidelity to a higher power.

That’s the cold, brutal truth made plain by their dismissal of Christ as Lord in (legal/political/artistic/educational/economic) practice while claiming Him as “Lord” with their lips. That’s the ugly reality made crystal clear to anyone paying any attention at all to their glaring and wildly unbiblical inconsistency when it comes to defining and applying the concept of Christ’s lordship.

But who cares about consistency, right?

Who wants a Jesus that is really Lord?

As in: Lord over all.

Who want’s that Jesus?

Definitely not “We the People”.

And certainly not most American “Christians”.

Nope, “We the People” want a nice little Jesus who is “Lord” over…whatever doesn’t get in the way of what we want right here and now in “the real world”.

That’s the kind of Jesus “We the People” are into.

That’s the kind of “Lord” we want.

We don’t want the Lord implied in the “Jesus is Lord over all or He isn’t Lord at all” line. Not at all.

We hate that Lord.

We don’t want the Jesus who is reconciling all corrupted things in heaven and on earth, invisible and visible, to Himself by the power of His work on the cross as recorded in Colossians 1:15-20:

We destroy arguments and every lofty opinion raised against the knowledge of God, and take every thought captive to obey Christ . . .

And we definitely don’t want the Jesus who commands and equips His people to make disciples of all nations, teaching them to obey all that He has commanded as recorded in Matthew 28: 18-20 (also known as “The Great Commission”):

. . . Jesus came and said to them, “All authority in heaven and on earth has been given to me. Go therefore and make disciples of all nations, baptizing them in the name of the Father and of the Son and of the Holy Spirit, teaching them to obey all that I have commanded you.. . “

This Jesus – this true Lord – is the last person or thing we want in America.

We just want the slogan, man.

We want the prop.

We want what we’ve deluded ourselves into believing is some sort of valid cover for our open rebellion in every area of our lives in practice here and now in “the real world”…a real world that is completely defined, owned and held together by the very Jesus we reject as Lord in legal/economic/artistic/educational practice while blasphemously claiming to love Him with our lips.

We want the catch phrase and the claim to Christianity without actually, you know, submitting to the actual Christ as actual King in actual practice in every actual area of our actual lives.

We want Him to rule over His kingdom – whatever it is – safely sequestered way over yonder and well out of our way, so that we can rule the “other kingdom” – our kingdom – here in the details of our everyday lives in what we like to call “the real world”.

And “We the people” are getting exactly what we want.

The Christ being claimed as Lord by the great majority of American “Christians” who will not have Him as Lord in practice is even now grinding their idols under His heel. He’s smashing them to bits under His perfect, purposeful judgment.

Every phony Jesus will be exposed and brought to ruin.

And every culture built upon a phony Jesus will be exposed and brought to ruin.

This is how things work in His creation.

This is how things go according to His Gospel-fueled Great Commission.

This is how history unfolds as His Kingdom conquers every culture, realm, and concept in His creation, all by His grace, all for His glory, and all to the eternal benefit of His people.

And we should’t want it any other way.

May “We the people” repent accordingly, while there is yet time…