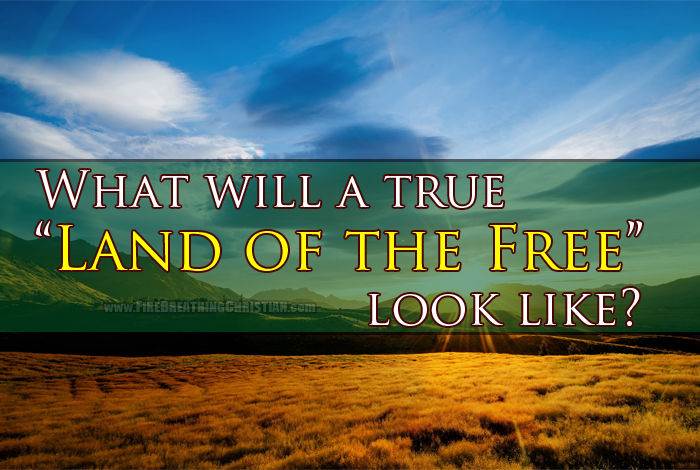 What will a true “land of the free” look like?

Make no mistake, such a land is coming, and it’s coming right here to this temporarily beleaguered little planet, courtesy of God’s Kingdom as it inevitably and unstoppably advances over all of His creation in accordance with His Gospel-fueled Great Commission.

What will be some of the defining attributes of this true and enduring Land of the Free?

Well, for one, it will openly and clearly center its identity on Jesus Christ, as it must in order to secure and sustain true freedom, liberty, peace and prosperity anywhere in His creation. This coming Land of the Free will openly, lovingly, and exclusively embrace Him as King. It will unambiguously encourage that His will be done on earth as it is in Heaven (Matthew 6:10), that all things material and immaterial be reconciled to Him through His work on the cross (Colossians 1:15-20), and that His Kingdom expand over all of His creation in accordance with His Gospel-fueled Great Commission (Matthew 28:18-20).

What will that feel like where the rubber meets the road?

While there are obviously many points and paths to explore along those lines, I’d like to submit a list of ten likely characteristics for your consideration. It’s my hope that the points chosen will help us to better understand the nature of where we are now in contrast with the true nature of liberty, freedom, peace and prosperity that define the Kingdom of God. It’s my hope that these contrasts will be particularly helpful to those of us living in America or the West by jolting us out of the fog that has formed over us during a lifetime drenched in State/Corporate propaganda aimed at radically redefining the concepts of freedom, liberty, justice and prosperity.

The sooner we find our way clear of such pagan propaganda and into the light of Christ as revealed in His Word, the sooner we will see and begin to understand the nature of true liberty, freedom, peace, and prosperity. And the sooner we see and understand these things, the sooner we can actively and productively pursue them so that we might, by God’s grace, see His will done right here and now in accordance with His Gospel-fueled Great Commission, bringing in its wake the true freedom, liberty, justice, peace, prosperity and joy that only He can provide to any people at any time in any place in His creation.

With that said, on to 10 Marks Of The Coming “Land Of The Free”:

So there you have it – ten marks of a true and coming Land of the Free.

But remember: This Land of the Free that is coming is a bottom-up movement.

It’s made possible not through some top-down imposition by the State.

It’s brought to life instead by the grace of God through His Spirit-filled people in accordance with His Gospel-fueled Great Commission, one supernatural conversion and grace-fueled act of obedience at a time.

All by His grace.

All for His glory.

And all to the eternal benefit of His loving, obedient people.

That’s what a true Land of the Free is gonna be like.

Obviously, we have a lot of work to do which, in and of itself, is an amazing blessing! We’ve been put here and now at this time in this context to take the next steps in the advance of His Kingdom over each and every one of His enemies. How cool is that?!

Let’s get to that true Land of the Free, where true liberty, true peace, true prosperity and true freedom are secured and preserved by the King who defines His Kingdom.