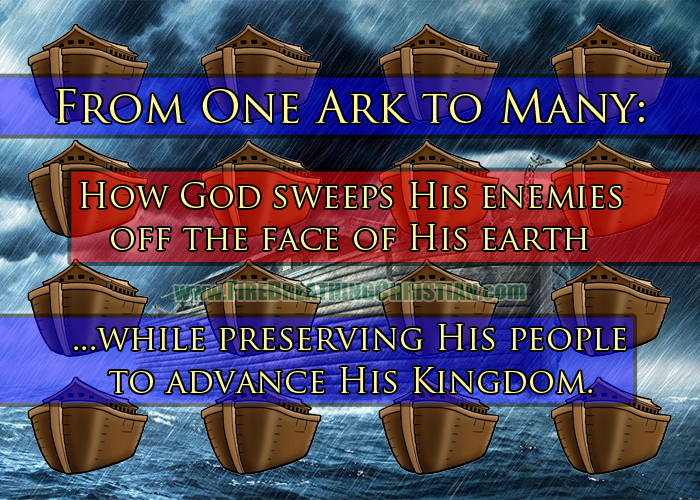 Contrary to popular opinions currently dominating American evangelicalism (and thereby leading the rest of American culture down the drain), it isn’t God’s people who are destined to be swept off the face of His earth.

That’s how He rolls.

Nothing and nobody can stop Him…though many like to pose and pretend otherwise for various reasons, including the vast majority of professing Christians in America. (Which is, again, a major reason why the American culture is where it is now.)

Many deny the inevitable victory of Christ in His creations of time and space as a means of escape from the hard work of the Great Commission and the challenge of faithfully proclaiming and applying an everything-touching Gospel and an everything-owning Lord.

They like their Jesus limited – very limited – in scope.

Some dream of raptures to whisk them away.

Others insist that the Gospel is just “a spiritual thing” and that there’s nothing we can do here and now to actually improve things over time…despite roughly 2,000 years of evidence to the contrary.

We’ll get more into that evidence in future posts, but for now let’s think about one of the oft-cited reference points for both rapture-obsessed dispensationalists and other professing Christians who promote the idea that there’s just no way that the Gospel (or anything else) is actually going to make things better over time here on earth.

Of course it is!

Far too awesome to find a place in most American professing Christian churches these days, apparently, but we’ve already touched on that.

What I want to focus on here for a sec is the ark concept – the way that God provides the physical means by which His physical remnant is physically preserved even as His enemies are physically wiped from the face of His earth.

As we can see so clearly if we’ll just cast aside the pessimistic, unbelieving, Gospel- and Great Commission-denying blinders that have become the norm in American Christendom, God is in the process of moving mightily through His property (all people and all things) to provide unmatched, previously unimaginable opportunities for the decentralization of power and proliferation of true freedom, liberty, prosperity and peace just as one would expect from a Kingdom that has come, is conquering, and cannot be defeated.

The radical decentralization of economic power is coming.

The radical decentralization of civil governmental (State) power is coming.

The radical decentralization of art, media, education, and everything else is coming.

The remarkable technologies that the Lord has already provided have been used by Him to begin and escalate this process. The technologies that He is providing now are pushing that movement along, and at a quickening rate that absolutely terrifies the fans and managers of the centralized systems under which we now (temporarily) labor.

But they can’t stop what’s coming.

This frightens them, of course.

And while they should be frightened – terrified, even – they shouldn’t be nearly as frightened as God’s people are inspired by the thought of what is happening here, now, and in the future for His people on His earth.

A million arks are being built even now, all by God’s grace, all for His glory, and all to the benefit of His people.

And the rains are coming soon.