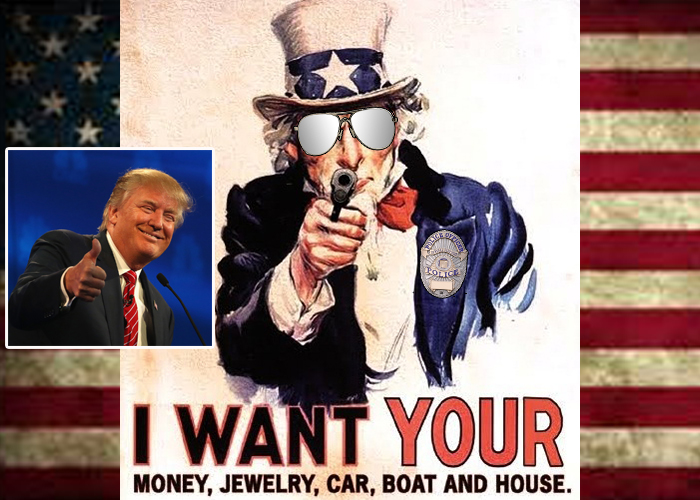 “The White House has riled the country’s civil libertarian wing after President Trump enthusiastically voiced support for a controversial law enforcement tool that allows an individual’s property or assets to be seized without a guilty verdict.”

That’s the opening line from a Fox News report chronicling the latest hyper-Statist pronouncements to flow from the Trump White House.

Please note the “without a guilty verdict” part there. It’s kind of a big deal.

“The president weighed in on what’s known as “civil asset forfeiture” during an Oval Office meeting last week with sheriffs. The president, who ran on a law-and-order message, said he shared their desire to strengthen the practice and even said he would “destroy” the career of a Texas politician trying to end it.”

So yeah, there’s a very thuggish vibe all over this thing.

To defend the ability of someone or a group of someones to seize the private property of others in such a manner is to defend straight-up theft.

And theft, as God has made fairly plain in His Law, is sin.

It is a vile, repulsive, and indefensible thing.

Even when the ones doing the stealing band together as what we call “the government”.

Even when they wear badges.

Even when they wrap themselves in the red, white, and blue of America and even when they talk about how what they’re doing is “for our own good” and in accordance with “the law”. (For more on this, please read Presuppositional Law: Where we begin with law determines where we end.)

Even then, theft is still theft.

But then again, theft by the State in the name of law and “the common good” has been A Thing for a long, long time now here in the “land of the free” and the home of the NSA.

Theft is the norm.

It’s what we do here in America, quite frequently, through the power of the State, which we are all too happy to use to steal from others so that we might fund our pet projects and favorite forms of Socialism (see: Social Security, public schools, Medicaid, Medicare, food stamps, disability payments, etc., etc., etc.).

So given over to satanic Socialism and Statism have we become that people can’t even own their own homes in America anymore. The State owns ’em all. We’re just renters.

Try not paying your property tax and see what happens. Skip those payments to the State long enough, and you’ll find out who really owns the home you live in and may even think you own.

And why does the collective known as the American State (be if national, state, or local level) operate in such a manner with you and I as basically serfs with The Government as our Lords?

Well, there are many reasons, beginning with control, but one of the more practical economic aspects of things like residential serfdom has to do with the funding of…you guessed it…satanic/Statist forms of children’s education.

Yep, we prevent people from even owning homes here in “the land of the free” so that we can ensure their children have access to “education” systems aimed at…you guessed it…perpetuating a State-centered approach to reality based upon a theory of knowledge first advocated by the serpent in Eden (see: Genesis 3).

So, you see, theft is at the very foundation of practically everything we do here in “the land of the free”, and there aren’t any signs of repentance and pride abandonment coming out of the Trump White House.

So far, it’s more American Statism coming from the pagan political right, which makes for yet another in a looooooong series of reminders that the Pagan Political Right and Pagan Political Left are two wings of the same Progressive/Statist dragon.

That dragon is all about theft: The theft of true liberty, true freedom, true peace, true security and true privacy.

All in the name of “the law” and all “for our own good”, of course.