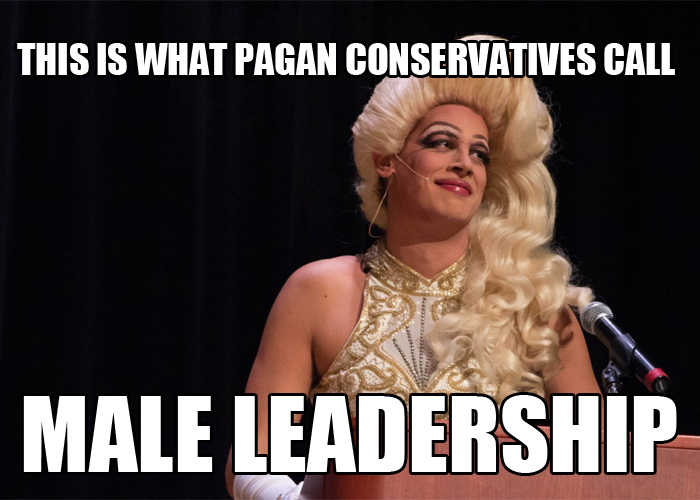 As we’ve chronicled again and again and again, American “conservatism” has become quite smitten with the LGBTQRSTD movement. Pagan conservatism is getting more gay by the minute. So much so that a raging, raunch-peddling, cross-dressing senior editor at Breitbart (you know, that “conservative” website) by the name of Milo Yiannopoulos has become the darling of millions of thoroughly paganized American “conservatives”, many of whom, like Ann Coulter, also proudly label themselves as Christian.

We’ve been harping on the giant flaming neon-lit warning sign that is Milo for some time here at FBC as well as over at The End Times satire site (where you can find Milo-related articles here, here, and here). Usually they are low-interest, and therefore low-traffic, posts, but we keep ’em coming because we think that God is showing us something important through Milo and the pagan “conservatism” that has made him its favorite activist drag queen.

It was only yesterday that we posted our latest Milo-related item, and within moments of that article going live news began to break big on yet another not-so-fabulous Milo story, so here we are again…but this story is different…in a “good” way, sort of, if for no other reason than it helps to shine a very bright light on just how desperate, pathetic, lame, and destructive pagan “conservatism” has become in America.

Initially, word broke that Milo had been disinvited from speaking at the upcoming Conservative Political Action Conference (CPAC) in DC and that he was reportedly on thin ice at Breitbart, which is saying a lot since that well-known “conservative” site (which was molded into what it is today by Trump’s chief White House strategist, Steve Bannon) recently published a swooning Milo-celebration piece entitled Marilyn Milo: ‘Dangerous Faggot’ Sings American Anthem In Full Drag To Conservative Audience, which included the following lovely little tidbits of info regarding our new American conservative hero:

While the crowd were waiting for Milo (also known as the “Dangerous Faggot”) to make his grand entrance, they erupted in a spontaneous chant of “Build That Wall” in eager anticipation of the Dangerous Faggot.

Milo was preceded by artists Rockie Gold and Mike Dece, who performed a series of pro-Trump, pro-Milo, and pro-Harambe raps. Professor Benjamin Acosta then gave Milo a short introduction, praising him and the alt-right for standing up to cultural leftism.

Milo then appeared, dressed in full drag, and walked across the stage in high heels to roaring cheers from the crowd.

A slide introduced the audience to his drag queen name: “Ivana Wall.”

Okay, so not really, but the point is that the above referenced article was actually posted by a “conservative” site even as Milo’s star continued to rocket like a big gay All-American, Star-Spangled meteor, right up until…well…yesterday, when news broke of Mr. Yiannopoulos having had some very curious things to say about man-on-boy, predator-on-prey sexual relationships.

Even Breitbart had to hit pause on that one – at least for a sec, anyway.

And now it appears that Ivana Wall has finally been (at least temporarily) dumped by (at least some of the) the All-American TrumpWorld “conservative” power brokers that made Milo the fabulous the most celebrated conservative crossdressing homosexual activist in American history.

Just weeks after protests broke out at UC Berkeley, Milo Yiannopoulos is under fire for appearing to condone pedophilia. The controversial speaker and columnist announced his resignation from Breitbart in a press conference and partially blamed the media for his negative image.

YIANNOPOULOS: And that is part of, you know, part of the failing of the media in this country. They have gleefully reported things about me they know aren’t true over the last 48 hours. With the result, you know, that you now all know. And you guys are responsible for that, and f—you for that. Because you, you know, you did a bad thing.

Ideally while not dressed in drag and hurling raunchy descriptions of your debauched lifestyle in the name of “freedom of speech” and promoting “conservative values”.

At least in all of this we have – if only for one fleeting moment – some real clarity as to what we’ve been sold (and bought) for a very long time now in America under the label of “conservatism”.

God is showing us things here.

Let’s hope that by His grace we finally get the message.