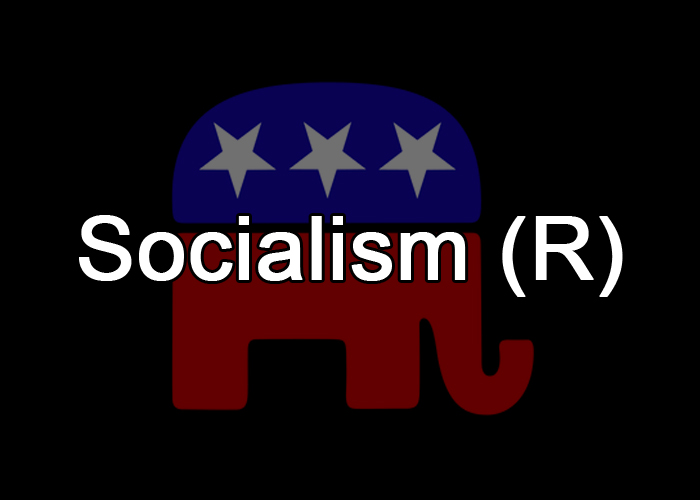 Republicans are our only real hope here in ‘Merica.

Trump will save us…from what, exactly?

Uh, no. Trump and the GOP are wholly committed to Socialism, just with a few sprinkles of crony capitalism (meaning: not free market based at all) thrown in to flavor things up a bit.

What about Statism? Will Trump and the GOP save us from that?

President Trump’s all about American Statism, and so are the vast majority of GOPsters, including their “conservative” base, which is overwhelmingly in favor of such flagrantly Marxist constructs as public schools and Social Security, as well as the globe-spanning/globe-dominating American war machine (which we cannot even come close to paying for apart from the black magic of fiat currency “money out of thin air” economics, which brings us to…).

What about the hellish, abominable bondage of fiat currency? Will Trump or the GOP save us from that?

That’s the system by which they’ve become what they are and taken possession of the power now in their hands.

So when we see the TrumpCare fiasco blowing up on our heads as it is now, we have no business whatsoever being the least little bit surprised. None at all.

For those who haven’t been following along this week, apparently, as Nancy Pelosi once famously noted about ObamaCare, we “conservative Christians” are now being told that a massive State-managed socialized medicine bill coming before Congress must be hastily passed in order to find out what’s actually in the massive State-managed socialized medicine bill in question.

This time the massive State-managed socialized medicine bill is coming from Republicans and backed by President Trump, so the sheer idiocy and insultingly asinine nature of the whole production is supposed to just skip right on by our willfully blind and compliant little Left/Right Paradigm programmed minds.

The Hill reports these latest developments in an article painfully but accurately entitled GOP rushes to vote without knowing full impact of healthcare plan:

That was then-House Minority Leader John Boehner (R-Ohio) in 2010 in the heat of the debate over ObamaCare.

Seven years later, Democrats could easily turn those words around on Republicans for the strategy they’re using to repeal and replace the same law Boehner railed against.

So let’s all get out our little scorekeeping notepads and mark this one down as exhibit #2,439,547 arguing for the Pagan Political Left and Pagan Political Right being two wings of the same dragon, shall we?

So thank you once again, GOP leadership, for showing us so plainly what we have fought so very hard for so very long to avoid seeing.

Opening our eyes after such a long time in darkness is definitely painful, but, thanks to the jarringly idiotic approaches you seem to be advocating in pretty much every area of life, we’re finally starting to wake up.