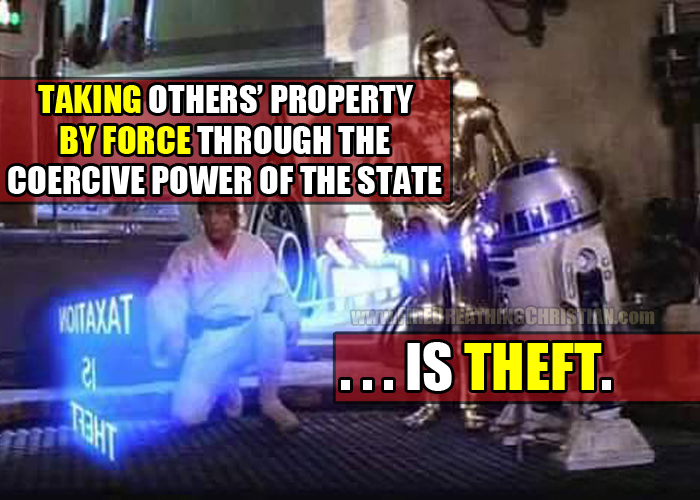 Is it okay to covet your neighbor’s property?

Yep, we actually think we’re all about freedom, liberty, free markets, property rights and capitalism while we openly and quite routinely use the power of the State to steal from our neighbors on our behalf.

Who said public schools were a failure?

Looking at things honestly and in the proper context – a context in which the American State is and has long been about the business of producing programmed, dependent slaves comfortable with coveting and stealing the property of others while actually believing themselves to be both a free and morally sound people – in that context, we really should acknowledge public schools as the massive success that they have been.

Not for us, of course.

But for the American State.

We’ve been “educated” by the State for so long and led so far down a trail of overtly Marxist/Socialist/Satanic thought when it comes to matters of economics, law, and life in general here in America that true freedom and liberty, when it is expressed in simple, clear terms, not only sounds bizarre, but downright offensive to our American State trained ears.

It sounds insanely risky to the State-programmed, State-dependent mind.

Put another way, modern Americans are stuck so deep in the mire of Statism and a slave/drone/dependent mindset that they simply cannot conceive of a world or culture in which mature, responsible adults voluntarily do the things that need to be done in order to make life, culture, and civilization flourish.

From the modern American slave/drone/dependent perspective, the State must compel and manage people’s lives, and in order to fund this compulsion and management, it must take their property.

By force, of course.

Which is theft, any way you slice it.

Even if we use a different word for stealing, we are still stealing when we forcibly take the property of another.

Even if we join a group of robbers that claims the power and authority of the State and thereby attempts to trade in the term “robbers” for something more dignified sounding like “official robbers” or “State licensed thieves”, we are still stealing when we forcibly take the property of another against their will.

We are without excuse, no matter how many words we swap out or how many concepts we warp to serve the purposes of the State and its dependents (us).

The Word of God is clear:

Even if you really think you deserve it.

Even if you think that society is entitled to it.

Even if you think others would really benefit from the theft.

It’s time for us to shake off the cobwebs and shackles of American Statism and start actually thinking like free, liberty loving adults who can actually – and voluntarily – manage their lives and culture far better than any State built upon coercive force and theft.

This is one of the core reasons why Statism – including American Statism – is fundamentally opposed to the Gospel-fueled Great Commission of Jesus Christ.

This commitment to covetousness and theft by force of the State is one major reason why Statism despises and opposes the Kingdom of God.

The State, while routinely pitching freedom, empowerment and the like, can only deliver bondage through coercion.

The Gospel, on the other hand, actually sets people free.

[Image above is a modified version of an image found at CitizenOP.com.]