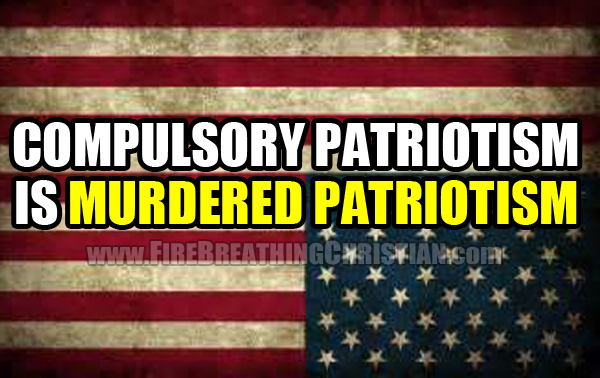 Both concepts flatline – or, perhaps better put: both concepts are radically transformed from something beautiful into something dark and destructive – once the voluntary component is removed from their core.

Voluntary, in this context, is essential.

Voluntary is the antithesis of compulsion.

Voluntary is the thing that makes life, family, church, culture and civilization flourish.

All of which makes voluntary a primary target for elimination by both the Pagan Political Right Wing and Pagan Political Left Wing (which are two wings of the same dragon, of course).

That DC-centralized power has been actively undermining true liberty, true privacy, and true freedom for well over 100 years now in “the land of the free” and the home of the NSA. After generations of State-directed grooming, training, and “education”, we have become a profoundly (and purposefully) retarded people, easily manipulated through emotional appeals to terms associated with values and virtues that we no longer even really believe in.

Are we really free?

How much freedom and liberty has been lost hand over fist by Americans over 100+ years of wars supposedly fought “for freedom and democracy”?

Did we even need a Visa to travel freely in 1900, before the “golden age” of massive U.S. government growth and perpetual “wars for freedom”?

Was there a Federal Reserve or the fiat currency that the U.S. government now uses to fund our enslavement through the never-ending, ever-growing “charity” of the welfare state?

Were we free in 1900 to have a conversation without assuming that the U.S. government was listening in and that Big Brother was watching us?

Again: DO WE EVEN WANT TO KNOW?

Do we even want to think?

Apparently, and quite voluntarily for most of the State-programmed drones in these increasingly Orwellian United States of America, the answer is no.

We don’t want to think.

We don’t want to know.

We want to sing, chant, shout and be proud!

But we don’t want to actually answer the question we’re told to sing on cue like a State-trained chimp: O say does that star-spangled banner yet wave o‘er the land of the free and the home of the brave?

Or does it not?

Does that flag fly over a land filled with people who actually care about and live in a state of true freedom and true liberty with the true opportunity to pursue actual adult lives in a land where a person might be able to really and truly own their home rather than living out their serf-like lives as a perpetual renter from the State?

Or does that flag instead fly over a land covered with State-programmed “conservatives” who love their public schools, Social Security, and any number of other soul-destroying, culture-enslaving Marxist constructs every bit as much as “those evil/stupid liberals” on the Left?

Is it really inherently “unpatriotic” to even ask these questions and then, in light of the answers, stop singing or pledging words that may not be…you know…true?

Counterfeit patriotism will pressure you to avoid even acknowledging, much less dealing with, any of these questions.

Which is precisely why it’s being pitched.

Before the truth sets people free, it tends to hurt.

May God grace America with the pain of conviction, the miracle of repentance, and the beauty of restoration that comes on the other side, so that we might, by His grace, finally ditch the counterfeits of patriotism and charity that are even now being used by idols on the Right and Left to march us deeper and deeper into bondage.