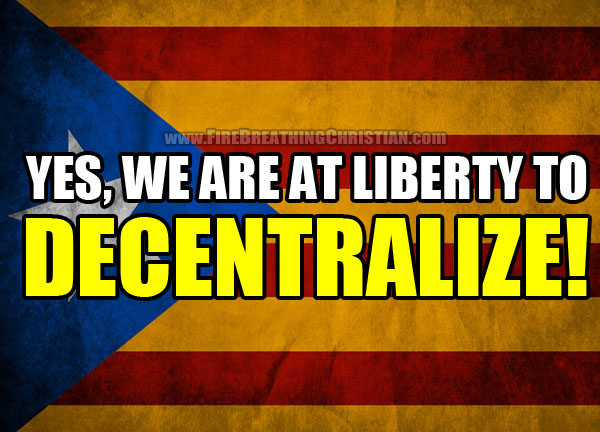 How cool would it be if there was a real group of people somewhere in the West who would actually take a stand by peacefully seeking independence from the massive Socialist State ruling over them?

How neat would it be for an actual group of actual people to come together right here in the 21st century to peacefully pursue actual independence from such a power in a spirit of true democracy and self-determination, choosing freely to, as somebody once wrote, “dissolve the political bands which have connected them with another.”

Well, thanks to the people of Catalonia, we no longer need to wonder or fantasize.

The forces of centralized power are, of course, reacting in a predictably thuggish manner by threatening physical force, as they always do when their contrived, controlled counterfeit “power to the people” spin is revealed to be a total and complete farce.

Spain is threatening to reverse that independence by force.

And all of this is a very Big Deal – especially for those hoping and working tirelessly to prevent the pesky thought of secession (the real decentralization of political power) from catching on elsewhere.

The Daily Mail summarized the latest developments in Catalonia this way:

“The Catalan Parliament has voted to declare independence from Spain, prompting the national government to impose direct rule on the region just 40 minutes later.

But before the vote, opposition parties stormed out of parliament in protest – with pro-independence MPs draping their empty seats with Catalan flags.

In response, the Spanish government in Madrid has invoked article 155 of the country’s constitution, dismantling Catalonia’s autonomy.

Independence was approved with 70 MPs in favour, 10 against and two blank ballots in the 135-member parliament.

After the vote, Puigdemont said: ‘Today our legitimate parliament, that came out of a democratic election, has taken a very important step. The legitimate representative of the citizens have followed the people’s mandate.

‘Now we are facing times when we will need to keep calm and peaceful and always keep dignity, as we’ve always done.

Note the Establishment response to the democratically expressed will of the people: The imposition of direct rule. The dismantling of Catalonia’s autonomy. The crystal clear threat of arrests and violence.

Note these things and mark them well as you contemplate questions that people in capitols far beyond Madrid would strongly prefer that you not even begin to consider.

Is the concept of “indivisible” State power something that America’s Founding Fathers would accept or reject?

Is the opening (and foundational premise) of the Declaration of Independence true or is it a dangerous lie that must be “corrected” and suppressed (by force, if necessary)?

Was the Pledge of Allegiance – a primary tool by which we are programmed and conditioned to accept and even adore the “indivisible” power of the State above us – was that Pledge actually written by a devout Socialist in the late 1800s for the purpose of promoting Socialism in America’s State-run public schools?

Would the Founding Fathers say the Pledge of Allegiance?

These are questions that we need to be asking, answering, and acting upon if we want to really be, rather than just sing about, truly “brave” people living in a genuine “land of the free”.