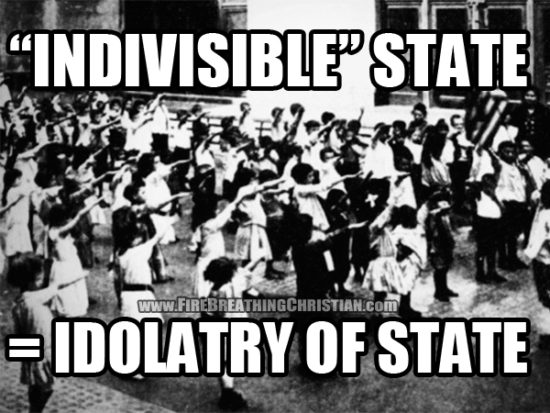 Every time a so-called conservative in America argues for the “indivisibility” of any particular government above any particular people, which they can’t seem to help doing when it comes to their beloved United States of America, I can’t help but imagine Twilight Zone theme music accompanying their presentation. Throw in the fact that most of these “conservatives” also tend to proudly exhibit great pride bordering on idolatry where the Founding Fathers are concerned, even though the Founding Fathers became the Founding Fathers by actively repudiating in the most dramatic fashion imaginable the notion of indivisibility where any man-made government is concerned, and you can’t help but wonder what these people are smoking.

So a State can join the United States, but it cannot leave?

People born into a cesspool of mass Marxism routinely imposed in the name of America cannot band together and choose to opt out of that increasingly dark, big government, Orwellian situation?

Even if they vote by an overwhelming majority do to so?

It’s just not possible – not allowed – no matter what?

There is no way out from under DC’s thumb, no matter how openly and insanely Marxist it gets?

Yeah, really. And not only in the minds of Leftists who appreciate and desperately fight for the irreducible power of the largest civil governmental constructs in existence since they realize that their ultimate goals center on the centralization of political power, but this bizarre notion is also held dear by a large number of “conservative” leaders and followers who view the centralized power of the U.S. over each of its states and localities as an inviolable truth and base presupposition upon which their America-centered worldview is built.

For these “conservatives” (and I use quotes here because, in practice, most of these folks are stark raving Socialists – see: Social Security, publics schools, etc.), the thought of a State, County or region of any size actually leaving the United States of America is heresy. It is unspeakable. It is unthinkable. It is thoughtcrime.

The irony of openly promoting such a view while simultaneously claiming some weird sort of hyper-fidelity to the Founding Fathers is both laughable and pathetic.

Put another way: This fundamental perversion of the “conservative” side of the political spectrum in America is yet another strong indicator of the judgment of God pouring down upon America.

While concepts of freedom, independence, liberty, and secession have always been important subjects worthy of serious contemplation, these things are important to consider now for unique reasons related to unique opportunities and major changes that are rising up all around us whether we like it or not.

Radical decentralization is coming. There’s no fighting it (though those pushing and profiting from centralized power certainly will try).

Questions that used to be avoidable through centralized control of things like education and media are no longer able to be suppressed and dismissed.

Because the technologies and tools now available (and improving by the minute) have broken the chokeholds once held by State and Corporate powers over things like education. The creation, presentation, and flow of truth is no longer under the strict control of centralized powers.

Obviously, those riding atop the rapidly fading centralized powers in question hate this. They hate this change. They hate that the zombie dinosaur systems and institutions upon which they’ve depended and profited from for so long – like public schools and large, centralized governments – are being revealed as not only unnecessary and wasteful nuisances to those pursuing true freedom and adulthood here on planet earth, but as serious obstacles to those good things. Public schools, mass media, and gigantic bureaucracies from DC to Brussels, as we are beginning to see clearly now, are not tools or advocates of our liberation and maturity into vibrant, self-governing, self-sustaining adults. They are instead tools consecrated to the preservation of our immaturity and the State-dependence that such retardation fosters by design.

Another timely answer to why these concepts and questions are particularly relevant comes by way of Catalonia, where the people of that Spanish province are seriously contemplating that “unthinkable” thing as they move toward seceding from Spain.

As millions of Catalans stand and fight in one way or another for their independence from Spain, and as those people are told again and again by Statists above and around them that “they can’t do that because it’s unconstitutional”, we are well served to mark those who are advocating this line.

Consider their “logic” in light of the following:

“When in the course of human events it becomes necessary for one people to dissolve the political bands which have connected them with another and to assume among the powers of the earth, the separate and equal station to which the Laws of Nature and of Nature’s God entitle them, a decent respect to the opinions of mankind requires that they should declare the causes which impel them to the separation.”

Consider what they have to say and understand it for what it is: Rank idolatry.

And what happens to all idols raised up in God’s creation?

They get ground under His heel (see: Psalm 2).

Even if they’re dressed in red, white, and blue.

So if we want true freedom, true liberty, true security, and true prosperity in this land (or any other), we will not turn to idols to provide those things.

We’ll turn to God as though He is actually God.

We’ll turn to Jesus, not as a token to rub for luck or as a prop to use on a stump speech, but as King of kings and Lord of lords for real.

We’ll test all things – including America – in light of His Word.

We’ll begin to act like serious thinking adults who aren’t afraid to ask hard questions and seek after true answers to those questions no matter how challenging those answers may be.

Is the U.S. or any other nation “indivisible”?

What are the consequences to believing in such “indivisible” political power?

Is it really a good thing to advocate a “you can get in but you can’t get out” Roach Motel approach to things like membership in the European Union, the Soviet Union, or the United States of America?

Would the Founding Fathers advocate or oppose The Pledge of Allegiance that the State now pushes through its State-controlled “schools” – a Pledge written by a Socialist for the purpose of promoting Socialism in those schools?

Is it ever appropriate to refuse worship to the State?

Is it ever necessary to do so?

These are questions we should be asking.

These are questions we would be asking eagerly and regularly if we were actually interested in liberty, freedom, and truth itself, because we’d know that in order to pursue or preserve true liberty and true freedom in this land or any other, we have to pursue and apply Truth no matter where it leads and which idols it confronts.

It’s time for us to remember something long forgotten in this land: Truth is a Person.

Truth is not a thing that can be separated from that Person.

Truth – all truth in every detail applying to every subject in His creation – is defined by that Person.

And that Person will not tolerate idolatry.