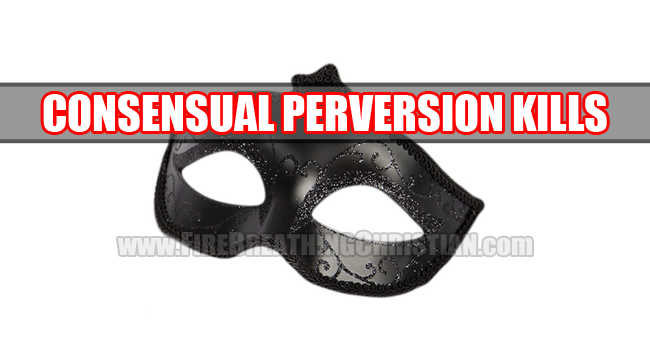 Nope, the problem with sexual immorality these days in here the “land of the free” and the home of the NSA is that the perverted acts in question have /not always been consensual for all parties involved.

You see, in American culture, if you want to engage in sexual immorality, we view that as your “God-given right”. We even proudly protect the “God-given rights” of businesses aimed at promoting and profiting from things like pornography and adultery.

We call this “freedom”, whereas Christ, the Author, Sustainer, and living embodiment of true freedom, calls it bondage that leads to death.

This clash of freedoms is now being brought center stage in American culture, though most Americans don’t seem to notice, largely because they’re ignorant of the Christ-centered concept of freedom and, as such, only have the counterfeit Americanized version of freedom by which to measure things.

The fact that most professing Christians in the land have bought into an anti-Christian counterfeit concept of freedom explains why the professing church in America has been so utterly (and ironically) impotent in the face of the sexual perversion that increasingly defines our age. A professing church led by “pastors” and leaders who cannot/will not dare get into the challenging details of the Great Commission where it intersects with things like economics, business, law, politics, and education – this “church” under these “leaders” have made American Christianity into less of a Gospel-fueled life- and culture-restoring force and more of an escort service guiding the culture to hell.

We have an American culture that celebrates anti-Christ approaches to freedom first and foremost because the professing Christian church in America has enabled and, in many instances, has even championed these things itself.

This is why we now have the chaos that we see unfolding around us.

Our views of “freedom” are bearing fruit.

Yet even as the culture blazes under obvious judgment, we still cling to our American sanitations of hard truths that we cannot bear to face in undiluted form. We still manage to miss the burning forest for the burning trees we prefer to focus upon. – it’s much easier to zone in on the Harvey Weinsteins of the world than it is to deal with the millions of professing American Christian women (and their “pastors”) who helped make 50 Shades of Grey a bestseller and are more than happy to publicly acknowledge their patronage of such rank perversion.

So it should come as no surprise that even though our culture is being dramatically ground under the heel of God’s judgment, all we seem to care about is whether sexual perversion is consensually practiced or not.

And that oughta tell ya something.

To watch a culture in which women make 50 Shades of Grey a mega-seller both in written form and on the screen, and then go on to claim shock and horror at how they’re not being respected or treated very well by males anymore, well…the judgment of God is written all over these things.

Until and unless conviction and repentance of our thoroughly anti-Christian, family- and life-destroying approach to culture in detail actually happens, we are destined to relentlessly rearrange deckchairs on our steadily submerging American Titanic…all while imagining that we’re actually dealing with problems seriously and making progress.

Zoning in on non-consensual immorality is not a solution. It is a problem – a problem that perpetuates our death-spiral rather than acknowledging and correcting its root cause: Rebellion against Christ the King, who is the Judge of all nations, including ours. (See: Want to see America in Scripture? Try Psalm 2.)