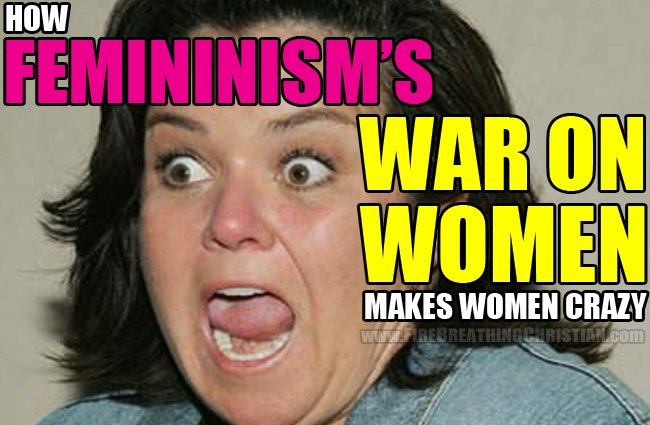 This is the well-documented (and entirely predictable) trend spanning several generations now.

Because feminism is at war with femininity.

This is why angry, unhinged lesbians like Rosie O’Donnell are such a natural fit for feminism.

Romans 1 is written all over this situation.

Or, perhaps better said: This situation is described and predicted vividly in Romans 1.

Which is why feminism and it’s hordes of angry, deranged lesbians (and their allies) hate the Bible so much (and the book of Romans in particular).

The latest secular chronicling of that which God assured would happen (in this case the increasing darkness and despair that would flow from the perversion of God’s design for men and women) comes by way of a survey taken recently in the U.K.

The Daily Mail covered it this way:

“Women are more miserable than men for almost their entire lives and are happier only in their mid-80s, according to a new NHS survey.

The study found that women’s happiness grows after retirement – before they overtake men at age 85.”

Not-so-coincidentally, most men don’t even live to 85.

Also not-so-coincidentally, the media spin on the problem of women’s relative unhappiness is placed squarely on the shoulders of, you guessed it: men!

“This may be because many older people are widowed by then, which generally boosts happiness in women but makes men more miserable, psychiatrists claim.”

See, women who have living male spouses are inherently made unhappy by that situation, whereas women who are “liberated” of their husbands (by death) are, well, liberated. And happier.

“The number of Britons reporting consistent unhappiness is on the rise, with women more likely to report severe issues at every age, the Health Survey for England found.

Twenty eight per cent of women aged 16-24 have mental health problems bad enough to count as a disorder, reports the Times.

This is almost twice as many as men in the same age bracket, the survey of 8,000 people found.

As they enter middle age, 24 per cent of women – almost a quarter of 45 to 54-year-olds – are classifiable as mentally ill.

28% of women aged 16-24 have mental health problems bad enough to count as a disorder.

Please let that soak in.

Please also note that 16 years olds are here described as women and included in the survey as such.

So obviously Roy Moore is not a part of the story.

Then there’s the “24 per cent of women – almost a quarter of 45 to 54-year-olds – are classifiable as mentally ill” bit.

Which seems like the perfect segue into a relevant passage feminism’s much-hated yet unbreakably true book of Romans:

For I am not ashamed of the gospel, for it is the power of God for salvation to everyone who believes, to the Jew first and also to the Greek. For in it the righteousness of God is revealed from faith for faith, as it is written, “The righteous shall live by faith.”

For the wrath of God is revealed from heaven against all ungodliness and unrighteousness of men, who by their unrighteousness suppress the truth. For what can be known about God is plain to them, because God has shown it to them. For his invisible attributes, namely, his eternal power and divine nature, have been clearly perceived, ever since the creation of the world, in the things that have been made. So they are without excuse. For although they knew God, they did not honor him as God or give thanks to him, but they became futile in their thinking, and their foolish hearts were darkened. Claiming to be wise, they became fools, and exchanged the glory of the immortal God for images resembling mortal man and birds and animals and creeping things.