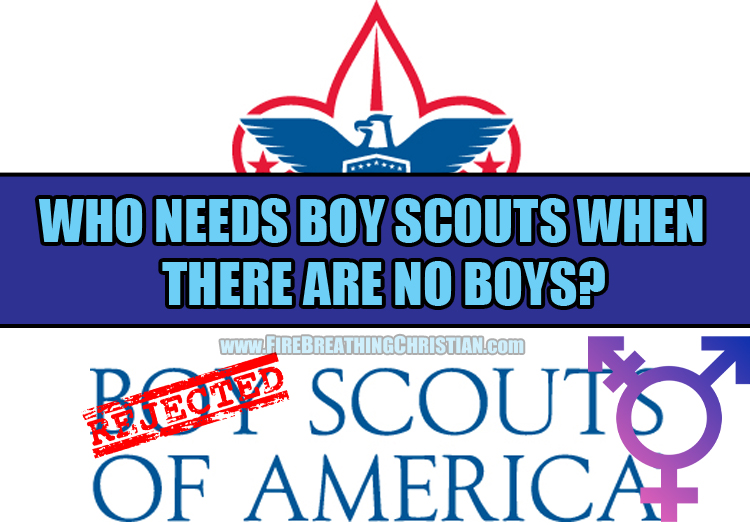 To be more precise, when there is no objective, biologically defined construct known as “a boy”, and when even one’s sex is regarded as subject only to the subjective, feelings-based whims of any given moment, then what place could there be for an organization like the Boy Scouts?

That question has been asked and answered by the organization in question, with its leadership subsequently deciding to drop “Boy” and just be known as “Scouts” so that it can more aggressively and coherently(?) pursue girls as members.

While, like the many actual women who are shrieking in horror while being mercilessly trampled underfoot by pretend women spearheading the trans movement, groups like the Girl Scouts are trying, from their own laughably compromised foundation, to protest the Scouts’ move, for obvious and quite pragmatic reasons.

One wonders if the Girl Scouts wish they’d just dropped “Girl” from their name before the Boy Scouts dropped “Boy” from theirs, but hindsight is 20/20.

As for this latest chapter of America’s Romans 1 style plunge into suicidal stupidity, AP covered it this way:

“For 108 years, the Boy Scouts of America’s flagship program has been known simply as the Boy Scouts. With girls soon entering the ranks, the group says that iconic name will change.

The organization on Wednesday announced a new name for its Boy Scouts program: Scouts BSA. The change will take effect next February.

Chief Scout Executive Mike Surbaugh said many possibilities were considered during lengthy and “incredibly fun” deliberations before the new name was chosen.

“We wanted to land on something that evokes the past but also conveys the inclusive nature of the program going forward,” he said. “We’re trying to find the right way to say we’re here for both young men and young women.” . . . “

Ah, “young men” and “young women”…such soon-to-be antiquated terminology. We all know that such lingo is merely temporary window dressing destined to be jettisoned in favor of ever more inclusive PC-speak as soon as possible.

Which, as you might have guessed, is where the Girl Scouts’ interest comes in, as reported later in the same AP piece:

“The name change comes amid strained relations between the Girl Scouts and Boy Scouts of America.

Girl Scout leaders said they were blindsided by the move, and they are gearing up an aggressive campaign to recruit and retain girls as members.

Among the initiatives is creation of numerous new badges that girls can earn, focusing on outdoor activities and on science, engineering, technology and math. The organization is expanding corporate partnerships in both those areas, and developing a Girl Scout Network Page on LinkedIn to support career advancement for former Girl Scouts.

“Girl Scouts is the premier leadership development organization for girls,” said Sylvia Acevedo, the Girl Scouts’ CEO. “We are, and will remain, the first choice for girls and parents who want to provide their girls opportunities to build new skills … and grow into happy, successful, civically engaged adults.”

The Girl Scouts and the BSA are among several major youth organizations in the U.S. experiencing sharp drops in membership in recent years. . . “

You mean homosexuals and “transgender” types aren’t providing enough replacement children to keep up with the losses that come when sane heterosexual parents yank their children out of your transblended conversion of a once respected organization?