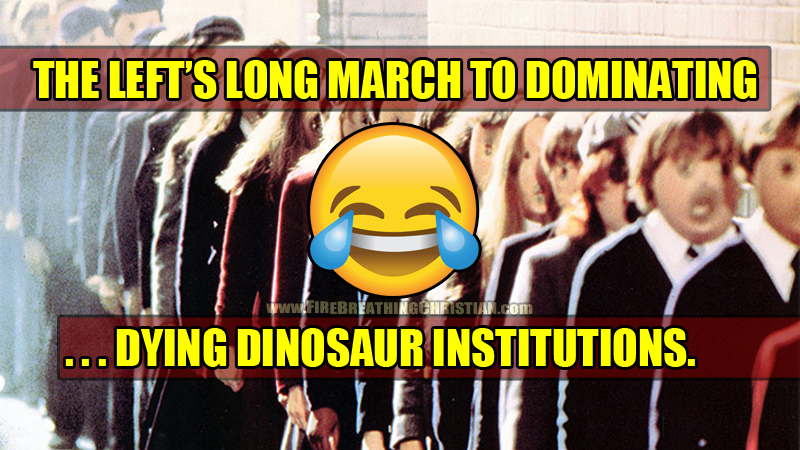 It’s easy to be distracted from a good joke when the world is burning around you.

But sometimes the joke is so good – so delicious in its irony and powerful in its purpose – that we’re well served to take a sec out of our crazy busy lives to savor the awesomeness of the divine humor playing out around us.

Okay, so what am I talking about? What’s the great joke I think we all need to notice?

So glad you asked!

We’re all familiar with the Left’s “Long March” through the institutions that shape and, in many instances, control culture and civilization, right? Even if we’ve never heard of the Frankfurt School and its long planned SJW/Identity Politics/Cultural Marxism push to infiltrate and eventually dominate institutions like public schools, churches, and mass media, we are living in a culture that has largely been shaped by those people and that march.

What’s so funny about that?

What’s humorous about the Left’s Long March having been so successful over many decades in America that even most professing Christian conservatives are stark-raving Socialists in practice who still keep right on voluntarily feeding their children to the State for “education” in a system built by and for the very worldview advocated by those early Social Justice Warriors who launched the Frankfurt School?

The punchline is this: Even as the Left’s long march nears its goal of total domination of schools, media, churches, and other centralized hubs of power over our culture, you know what else is happening?

The radical decentralization of power, that’s what.

Trough God’s gift of technology, radical decentralization is becoming “the thing” of our age.

Centralized powers in media, education, art, publishing, and everything else are even now being revealed as zombie dinosaurs uncontrollably hobbling toward their own fast approaching graves…all while they pretend to be as legit and super important as ever, of course.

But the gig is up.

The truth is shining brightly, and more so by the month.

Every day more people wake up to the fact that we don’t need these centralized powers controlling how we live, learn, work, think, and create.

Every day more people wake up to the reality that the centralized powers in education, media, and politics are actually our enemies – agents who actively strive to subvert our ability to grow into and function as true adults.

Every day more of us become aware of just how we’ve been sold up the river by systems of centralized power designed to control us through fake money, fake political theatre, fake education, and fake news.

Is it sad that so many professing Christian conservatives still prop up things like the rank American Socialism that has strangled our culture for so long, leaving the masses utterly dependent upon the State?

It is pathetic that even now so many professing Christian conservatives still feed their children to the beast of State-run education?

Even so, the bigger picture is quite funny in important ways.

The Left – now accompanied by vast swaths of “Christian conservatives” in America – have marched to near-complete control over most hubs of centralized power in our culture.

And just as these Marxists (and their pawns) have arrived at the doorstep of victory, what has God done?

So yeah, feel free to laugh.

The fact that God has such a fine-tuned and awesome sense of humor shouldn’t surprise us at all since He invented and owns humor, laughter, and every other good thing in His creation.

And that, my friends, is a perspective that you will never see taught through public schools or any of the other dying dinosaurs of centralized power.