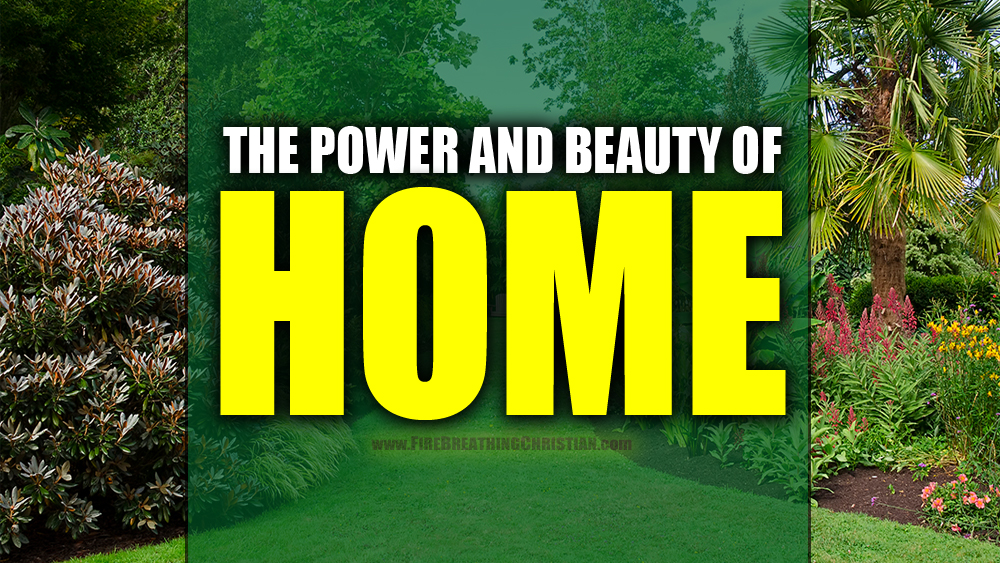 A radically debased approach to the concept of Home is one of the telltale signs that we’ve devolved into a very unhealthy, fragile, and weak culture. This is one of many painful but important truths being made plain through the unfolding Chinese Coronavirus Pandemic.

One of the primary reasons for our inability to weather storms like the one we’re dealing with now is that we’ve seriously neglected Home in almost every meaningful way. Economically, by refusing to save and prepare, we’ve allowed Home to become just another fragile link in a supply chain system designed to maximize dependence on the State and its corporate sponsors. Educationally, we’ve allowed Home to become…well…little more than a place for disciples of the State to sleep and eat between programming sessions at State-managed indoctrination factories leading to corporate managed career paths in their life as a human resource. Culturally, we’ve allowed Home to be stripped of its call to cleanliness, order, vibrance and beauty, replacing that life- and culture-transforming mission with a type of base, dingy, pragmatic utilitarianism that’s far more Soviet than Christian.

We’ve been sold the idea that home is just the place where we eat, sleep, and use the bathroom in between the much more meaningful stretches of time that we spend away from home in “the real world”. So it should come as little surprise that the thought of remaining home for a few weeks or longer is both terrifying and depressing to many.

There are even many Christians who view Home cultivation and beautification as “low level” priorities or even a waste of time and resources. They think of Kingdom-building work as primarily being away from Home, rather than beginning and constantly being fed and defined through healthy, vibrant, well developed and deeply cared for Homes. Not so coincidentally, many embracing these perspectives have homes and home-lives that are in shambles, left to smolder and crumble from neglect while those responsible for the neglect fill their time and spend their energy “changing the world” though all manner of “ministries” aimed away from their homes.

Which all makes sense if you have a fundamentally warped view of Home.

If Home is merely a simple, utilitarian pit-stop facility where basic biological needs are accommodated, then why would anyone want to be there any more than absolutely necessary?

If “out in the world” away from Home is where all beauty, joy, adventure and meaning are to be found, then why would anyone want to stay Home for weeks or months?

If Home’s function is merely to provide the basic bio-needs of human resources so that said resources can focus their energy as much as possible on perpetually improving everything but Home in service to the State and its corporate sponsors, then it might be wise, healthy, and responsible for good human resource drones to go with the flow and dive into this Home-debasing approach to life.

But that approach isn’t wise, it isn’t healthy, and it isn’t responsible.

Even while it seems to be working.

Even if it goes on “working” for years or decades or generations.

Even if we seem to have gotten away with a Soviet/materialist/minimalist approach to Home over the past several decades (at least), the truth is that we haven’t gotten away with it at all and we are now in the process of learning that truth the hard way…or in many hard ways, actually.

True Home isn’t supposed to be an unclean, underfunded, underfed, unprepared, disorganized, and neglected afterthought in a healthy, vibrant culture living out the Gospel-fueled Great Commission. True Home is the tip of the spear in advancing true literature, true art, true economics, true education, and every other good thing necessary to produce the City on a Hill noted by Jesus, and cited since by many who would have us turn from Him and toward some (or any) other source to identify and understand the true nature of the City on a Hill.

“You are the light of the world. A city set on a hill cannot be hidden. Nor do people light a lamp and put it under a basket, but on a stand, and it gives light to all in the house. In the same way, let your light shine before others, so that they may see your good works and give glory to your Father who is in heaven.

“Do not think that I have come to abolish the Law or the Prophets; I have not come to abolish them but to fulfill them. For truly, I say to you, until heaven and earth pass away, not an iota, not a dot, will pass from the Law until all is accomplished. Therefore whoever relaxes one of the least of these commandments and teaches others to do the same will be called least in the kingdom of heaven, but whoever does them and teaches them will be called great in the kingdom of heaven.“

So obviously the City on a Hill – the real one – has as high a view as possible where the Law of God is concerned. Put another way, the City on a Hill has Jesus’ view of the Law. While letting that sink in, and in an effort to help correct some fundamental misconceptions floating around out there, I invite you to consider the following:

When you imagine the City on a Hill, what do the buildings look like?

Are they awe-inspiringly vibrant and beautiful?

Or are they sterile, uninspiring, utilitarian, and Soviet?

Now consider this: Who builds those buildings?

And who lives in them?

All by His grace, all for His glory, and all to their everlasting benefit in accordance with His Gospel-fueled Great Commission.

With these lofty visions in mind, let’s take a moment to focus on where our feet meet the ground where Home is concerned.

What can we do to make our homes more like Home?

Here are a few ideas that I’ve been kicking around lately as I try to productively use this time of more Home-centric living.