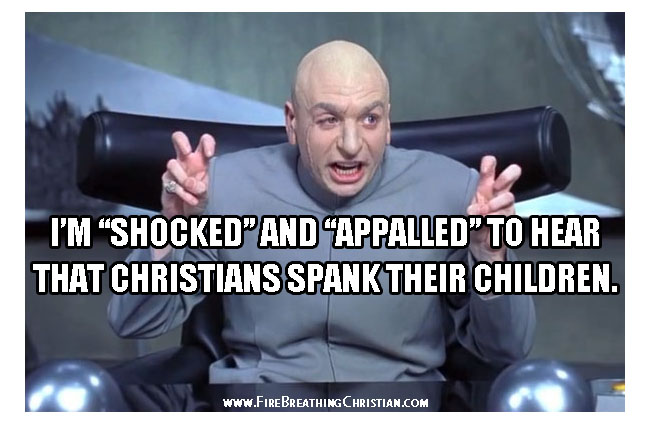 When the Forces of Pagan Progress and Tolerance smell Christian blood in the water, things happen.

The Pagans get active. They get crazier.

Their eyes roll back, their mouths open wide, and they lose what little control they ever had as they’re overwhelmed and compelled to instinctively lunge toward the scent of what they perceive to be yet another cultural victory upon which to feast.

This is pretty much what’s going on now with the Duggar family. As I noted last week, great sin has been brought to light and there is still much to understand and address where the details of the Duggar story are concerned. I’m not here making a blind, blanket defense of the Duggar family, though I do highly regard them based upon my admittedly limited understanding of everything that they believe in detail and try to live out in practice. I hope to learn more about them in the future. In the meantime, I remain thankful for their bold (and clearly hated) stand for many biblical principles and I hope that you will join me in praying for all of those involved with and impacted by the revelations brought to light in recent weeks.

What I want to touch on here is the latest wave of Pagan (and professing Christian) frenzy focused on the “stunning”(!) revelation that the Duggar family actually dares to *gasp!* spank their children!

Yes, you read that right.

The Duggars spank(!!!) their children!

Perhaps you didn’t read me clearly. I will type more slowly for you this time:

This is apparently supposed to serve as a very clear demonstration and confirmation of their status as dangerous, knuckle-dragging, Neanderthal-ish religious zealot nutjobs.

You know, the kind of people who actually believe (and therefore strive to live by) things like:

Whoever spares the rod hates his son,
but he who loves him is diligent to discipline him. ~ Proverbs 13:24 (emphasis added)

Uh oh! Did you see that?

And did you notice its context.

Well, that’s a topic for another post, but we should at least note here that we’ve touched on another of the roughly 3.2 gajillion examples of how the world’s definitions of love and hate directly contradict perfect nature of God as revealed in His Word. Which explains why Pagans and Pagan-influenced professing Christians tend to hate things like biblical child raising all in the name of what they call “love”.

Speaking of acting out hatefully in the name of love and understanding: Practically every mainstream Pagan “news reporting” mouthpiece is at present spewing forth some sort of “shock” piece warning the world that the Duggars actually spank their children, perhaps even…wait for it…*drumroll*…[insert dramatic, suspenseful music here]…”with ‘a rod’“.

I hope that you were sitting down for that.

Sorry; I should’ve warned you ahead of time.

Obviously, the above passages from Proverbs as well as well as the great many others describing child discipline in decidedly Pagan-hated/politically incorrect ways can be abused and twisted to justify any number of perverse behaviors. Anyone, including the Duggars, who violates Scriptural truth in such a manner should (and ultimately will, one way or another) suffer consequences. That said, what we are seeing here in the latest wave of “outrage” from the Forces of Pagan Progress and Tolerance (and their many allies in the professing Christian camp) is nothing more or better than another predictable Pagan/”Christian” assault on the God-ordained, God-defined institution that they hate so very much: The Family.

And make no mistake, Christian: If you think that sacrificing or persecuting the Duggars into silence will sate their appetite, you are tragically and dangerously mistaken.

They want you to avoid spanking your children.

They want you to avoid biblically disciplining your children.

They want you to follow their lead in handing your children over to the State and corporation-controlled pop-culture for “education” in all things, with a little Christianity sprinkled on the side via Sunday church and grace at dinnertime if that makes you feel better about it. (See: Redeeming Children’s Education: Confronting Our Satanic Approach to the Pursuit of Knowledge.)

They not only want these things. They demand them.

And they will do everything that they can to bludgeon, bite, and (ironically) shame you and yours into submission.

There is no middle ground.

And they know it.

We should know it better than they do. We’re Christians. But after generations of being spoon-fed Candy Christianity, Magic Christianity, and a “Gospel in a Bottle” that teaches us to just worry about “getting saved” and leave the details of art, law, politics, education, science and everything else to the enemies of Christ, well…we’re vulnerable. We’re weak. We’re fat, apathetic and lazy.

And we’re bleeding out into the water.

We’re all of these things because we’ve chosen to be all of these things. In our self-centered cowardice, we’ve chosen the weakness, laziness and vulnerability that now defines the Christian position in American culture, and not just for ourselves, but for the broader culture in which we were placed by Christ to be strong for Christ. In our surrender to selfishness and lameness, we’ve led the culture in the same direction. We’ve paved the way for its destruction…all because we want to be liked and we want to be comfortable here in this culture as it is. (See: The devil only holds what we leave in his hands.)

If we won’t stand for Christ’s perfect Word on the nature and application of family life, gender roles, children’s education and discipline, who will?

If there are no Christians willing to boldly and clearly take hard, unpopular stands in the culture, who will?

Pagans understand this perfectly well, which is why they’re doing everything they can to destroy the Duggars and anyone who would come alongside them in defense of the many good, beautiful, biblical truths for which they have taken a bold and clear stand.

Of course the Duggars are sinners. They are flawed, They are wrong about things. This is not a blanket endorsement or defense.

In the broad, general sense, this whole Duggar drama deal is yet another warning. It’s a warning as to where Pagans (including Paganized “Christians”) desperately want this culture to go and what they’re willing to do to get it there. (See: Duggar Drama and the Trans-Jennerism of American Culture.)

So don’t be shocked. Don’t be stunned. And whatever you do, Christian, don’t be talked or shamed into putting down The Sword of Truth (Scripture) as your life-defining, life-defending, enemy-destroying weapon. It is only unstoppable, supernaturally empowered weapon to be found on any of the many raging cultural battlefields around us, and so long as we know and use that weapon well, we cannot be defeated. The enemy cannot win.

This is why they will do anything to shame or intimidate you into setting it aside.

Instead, commit yourself to knowing it better so that you can use it more effectively. Know the battles to which you’ve been called. Know the perfect weapon that you’ve been given. Know the victory that has been assured.

Do these things and we will roar rather than whimper. (See: Roaring into Post-America Christianity.)

Then, by God’s grace and for His glory, we will win.