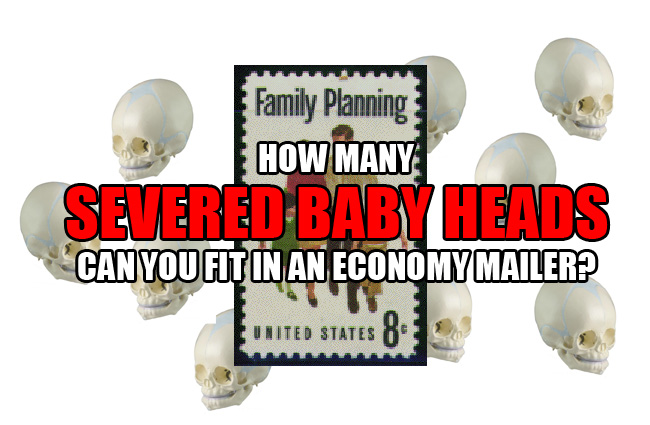 Remember when things like Jeffrey Dahmer’s refrigerator were viewed as a generally bad thing?

As we careen toward the natural, increasingly dark destination of “We the People”-based law and life in practice, we are finding out just how quickly the unthinkably vulgar and evil can transition into a new sort of normal…before just as quickly moving on into the “old news” category, making way for the next previously unthinkable evil to become the new accepted norm.

As The Weekly Standard (and many others) reported yesterday, the latest undercover Planned Parenthood video contains an interview with Cate Dyer, CEO of StemExpress, an organization that buys aborted baby body parts from Planned Parenthood and sells them to researchers. Here’s a snippet of the chit-chat and back-slapping satanic humor captured in the video:

StemExpress: I know we get requests for neural [tissue]. It’s the hardest thing in the world to ship.

Buyer: You do it as the whole calvarium.

StemExpress: That’s it, yeah, that’s the easiest way. And I mean we’ve actually had good success with that in the past.

Buyer: Yeah, Make sure the eyes are closed!

StemExpress: [Loud Laughter] Tell the lab it’s coming. So they don’t open the box and go, “Oh God!” [Laughter] So yeah, whereas so many of the academic labs cannot fly like that. They’re just not capable.

Buyer: Why is that? I don’t understand that.

StemExpress: It’s almost like they don’t want to know where it comes from. I can see that. Where they’re like, “We need limbs, but no hands and feet need to be attached.” […] They want you to take it all off, like, “Make it so that we don’t know what it is.”

Buyer: Yeah. Bone the chicken for me and then I’ll eat it.

StemExpress: That’s it. But we know what it is [Laughter]. […] Their lab techs freak out, and have meltdowns, and so it’s just like, yeah.

Yeah, we “know what it is” alright. More precisely, we know who they are.

We’ve known these things for a very loooong time.

But we just keep right on murdering and hacking ’em to pieces, don’t we?

We have to be economically responsible, don’tcha know.

We do it all for convenience and profit and all in the name of “freedom”, “liberty” and a person’s “God-given right” to murder their own baby boy or girl for any reason or no reason at all.

Welcome to the hell that inevitably follows when “We the People” make ourselves God in practice. (See: Presuppositional Law: Where we begin with law determines where we end.)

Welcome to a proud, American culture that’s so desensitized to child sacrifice that it’s literally become a joke.

Then consider why the same Pagan Political Right “leaders” who pose and posture on this subject routinely encourage us to send armies and jets and bombs to this, that, and every other far flung land in order to fight “those barbarians” in ISIS, while steadfastly refusing to use our military to protect our children from being openly murdered and dismembered on a massive scale right here in ‘Merica. (See: If ISIS did to one American child what Planned Parenthood does to millions, we’d go to war and kill them for it.)

Ask yourself why the Pagan Right Wing of the Pagan Political Dragon never gets around to actually stopping the open, systematic mass-sacrifice of children by the millions here in the “land of the free” and the home of the NSA. (See: Just in case you still think Republicans are ever going to actually stop abortion…)

Yes, think about these things. Pray about them. And repent accordingly of any support given to the System of systems that will always rationalize, excuse and allow our soil to be drowned in the blood of our own babies. (See: How’s that Pagan “conservatism” workin’ out for ya, Christian?)

Until and unless we – the true Church – lead the way in recognition and repentance of these things, confronting the enemies of Christ by standing on His Nature as revealed in His Word in every area of life, jokes about mailing severed baby heads will soon become old and unnoticed non-news, making way for the next even worse thing down the pike to become our new normal.