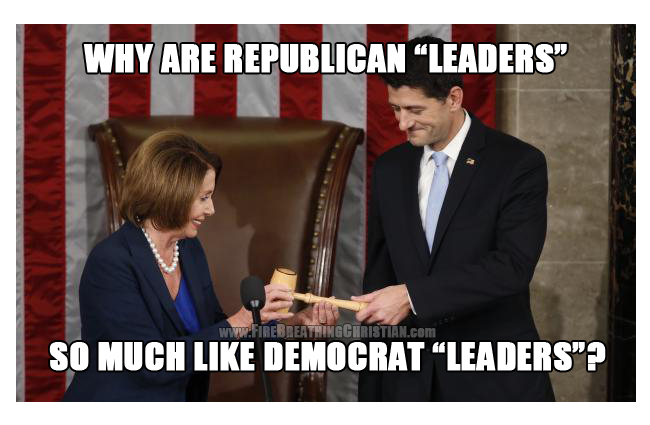 …much less shut down Planned Parenthood

…much less end the practice of open “legally” protected child sacrifice in America for convenience and profit.

So speculates the new GOP leader in the US House of Representatives, anyway.

Paul Ryan doesn’t believe Planned Parenthood should get one “red cent” from taxpayers — but he cautioned Sunday against expectations that he’ll be able to pull federal funding for the organization now that he’s House speaker.

“I think we need to be very clear about what we can and cannot achieve and not set expectations that we know we can’t reach given the constraints of the Constitution,” Ryan told CNN’s Dana Bash. . .

Back in July as we were still basking in the glow of the (mostly Republican appointee composed) US “Supreme Court” proclamation pretending to make “gay marriage” legal, we posted Just in case you still think Republicans are ever going to actually stop abortion…, in which we encouraged Christians to consider the reality that we have been played for a very long time and that we must stop, repent, and act very differently if we are to expect anything but continuing loss and increasing darkness on the American cultural battlefield:

So which of the two All-American Pagan political parties gave us the majority of Supreme Court Justices who gave us “legal” abortion in America?

It’s quite predictable, actually, once you accept the obvious (yet painful and thus often ignored) truth that the Pagan Political Right and the Pagan Political Left are two wings of the same dragon. (See: How’s that Pagan “conservatism” workin’ out for ya, Christian?)

This is why, despite all of the rhetoric and posing and nibbling at the edges, the Republican Party has no intention of ever actually doing what so many Christians and other “pro-life” advocates claim to want. The GOP isn’t about solving this problem by taking a biblical stand against child sacrifice. The GOP is about preserving its “good cop” role in the controlled political puppet show that is American Corporate Politics, and it does this by, among other things, constantly pretending to be “pro-life” (and “Christian” too in some vague, never-defined-biblically-in-detail sense).

Paul Ryan is just another in a loooooooong line of “conservative” professing Christian Republican “leaders” who will only actually fight to lead us deeper into subjugation to the actual god-in-practice of all American Statists: The American State.

There is no principle, no liberty, no freedom, and no child that they are unwilling to sacrifice in order to get us there.