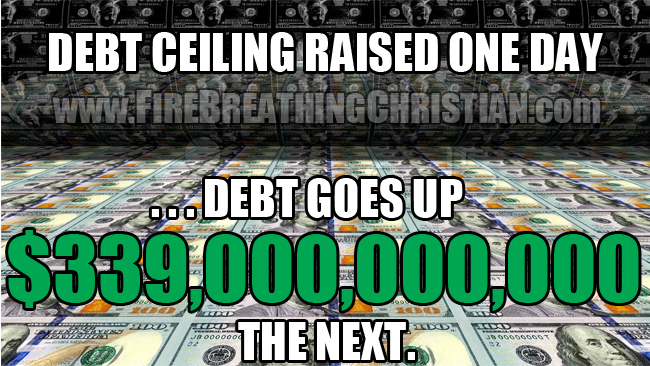 Last month in Debt ceiling? What debt ceiling? Let’s just print more fake money! we tried to encourage folks to keep their eyes fixed on reality as the freakishly fictional economic construct under which we presently live begins to unravel, crack up, and come tumbling down around us. We began by making plain that when a fiat economic system is in place – meaning a system in which some are empowered to craft “money” out of thin air, while all others are compelled to chase after the artificial wealth crafted effortlessly by the elites above them – such a system cannot help but promote ever-increasing slavery and dependence of the masses. This is anything but accidental. This economic bondage of the “money” chasers to the “money” creators is the whole point of it all. The modern anti-Christian Corporate-State construct is built upon the control that comes through this fundamental perversion of economics.

Now back to the myth of a “debt ceiling” as we covered it in October:

And that happens quite often these days, as you might expect. . .

That legislation allowed the government to borrow as much as it wants above the $18.1 trillion debt ceiling that had been in place.

The website that reports the exact tally of the debt said the U.S. government owed $18.153 trillion last Friday, and said that number surged to $18.492 on Monday.

The increase reflects an increasingly common pattern that can be seen in the total U.S. debt level when the debt ceiling is reached.

At the end of 2012, for example, the government hit the debt ceiling, and the Treasury Department was forced to use “extraordinary measures” to keep the government afloat until the ceiling could be increased again. Those measures included decisions to delay issuances of certain debt instruments.

When the ceiling was finally lifted a little more than a month later, the debt jumped $40 billion in a day as the pressure to stay under the ceiling eased, and after nine days, the U.S. was $100 billion deeper in debt.

This time around, the national debt has been frozen at its ceiling of about $18.1 trillion since late January, longer than nine months. The Bipartisan Policy Center estimated that the government had somewhere around $370 billion worth of extraordinary measures to use this time around.

Our economics are extraordinarily detached from reality.

In our extraordinary rejection of the Nature of God as revealed in His Word as our sufficient standard to understand and pursue His creation of economics, we have sold ourselves into bondage made possible through a black magic system of “money” made out of thin air by a few who have then used their fiat wealth to effectively control and own everyone and everything beneath them. (See: Fiat $lavery: We have been bought and paid for…with nothing.)

Ultimately this construct will fall, as all systems built in opposition to God’s Word must. (See: Why our economic Jenga Tower Of Babel must fall.)

In the meantime, as we watch, warn, and wonder at the extraordinarily destructive economic construct teetering and swaying above us, we should prepare.

Not in the spirit of fear and anxiety that defines so many unbelieving approaches to such things. Our preparations should be made in peace, security, and confidence, trusting completely in Christ to provide all that His people need to faithfully advance His Kingdom by way of His Gospel-fueled Great Commission…even (and especially) when things get crazy after our economic Jenga Tower of Babel finally comes crashing down.