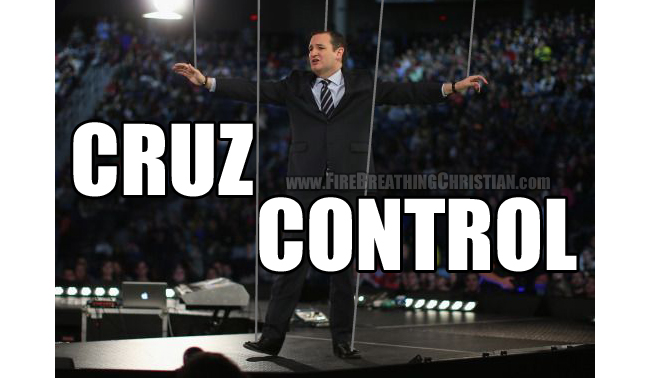 Ted Cruz has an excellent chance of winning the Republican Party nomination.

Over the past few months as I’ve been asked who I think will win the Pagan Political Right honor of facing the Pagan Political Left’s chosen representative in the contrived, controlled puppet show that is American presidential politics, I’ve picked Cruz. There are no guarantees, of course, and a million things can happen between now and Iowa, much less the Republican Party Convention, but at this moment Ted Cruz is very well positioned to win the role of Pagan Political Right rep for 2016.

Along these lines, Yahoo! Politics recently published an interesting article that’s making the rounds. In Ted Cruz has always had a master plan. Now it could win him the White House., Andrew Romano writes:

. . . it seems that Cruz is running what even Dan Pfeiffer, a former top aide to President Obama, concedes is “the best campaign on the other side.” He has raised more money than any Republican other than Jeb Bush and more non-PAC money than any other Republican, period; he also has more cash on hand than any of his GOP rivals. He was the first candidate to recruit chairmen in all 171 counties in Iowa, New Hampshire, South Carolina and Nevada. He is only candidate who for months has been consistently calling and sending surrogates to all five U.S. territories — Puerto Rico, the Commonwealth of the Northern Mariana Islands, American Samoa, Guam and the Virgin Islands — in order to secure extra delegates who could prove decisive down the road. (More on that later.) He is doing more than any other Republican to prepare for the so-called “SEC primary,” a new Southern voting blitz set to take place on March 1; he has already enlisted more than 100 countywide campaign directors and 1,500 volunteers in Georgia alone. And from the start he has conspicuously refrained from criticizing frontrunner Donald Trump, choosing instead to position himself as Trump’s heir apparent, should the bombastic real estate mogul falter or fade, which Cruz has publicly predicted will happen.

In light of the Cruz surge and increasingly widespread recognition that he has a solid shot at securing the GOP nomination, let’s flash back to early September when we posted the following:

I don’t know ’bout you, but when I hear someone answer a nationally televised debate question by making a clear appeal to Scripture as the means by which God clearly speaks to man, I’m impressed. I’m happy. I’m compelled to amen(!) and woohoo(!).

Senator Ted Cruz made just such an appeal in the first Republican primary debate televised by Fox last month when, in response to a question posed by Megyn Kelly as to weather he had “received a word from God”, he began his answer with a bold, clear acknowledgement of the Bible as the word that has been given to all of us. (Amen and woohoo!) The crowd went wild at that…or at least wild-ish. It was a good moment and a very good beginning of an answer.

But then we got more of what we should be very used to by now as Christians being wooed by representatives of the Pagan Political Right (some of whom claim to be (and at times probably really are) Christians themselves).

After Cruz’s awesome start, we got the ol’ Pagan Right switcheroo, with basic biblical principles warped and molded to suit the needs of the Republican version of American Statism. (See: How’s that Pagan “conservatism” workin’ out for ya, Christian?)

We replayed and examined the complete question/answer exchange between Megyn Kelly and Senator Cruz on yesterday’s Fire Breathing Christian Podcast.

You can listen to the podcast on the below player or by visiting the Fire Breathing Christian page at Podbean.com by clicking here.

Even with all of this noted, I do still like Ted Cruz personally. I’m not saying that I’ll vote for him, but I like the guy. I am hopeful for him. I am praying for him.

That said, he is a classic American Statist.

So how can I personally like an American Statist?

How can I warn against a man’s very flawed worldview while still liking him personally and wishing him well?

First off, because but for the grace of God I would still be a proud All-American Statist myself, just as I was for most of my politically active life.

I was so ignorant and so oblivious and so in denial for so very long myself that I have no trouble at all relating to how Senator Cruz may also be profoundly confused as to the proper role, responsibilities, and limitations of the God-made, God-defined, God-serving institutions of Family, Church, and State.