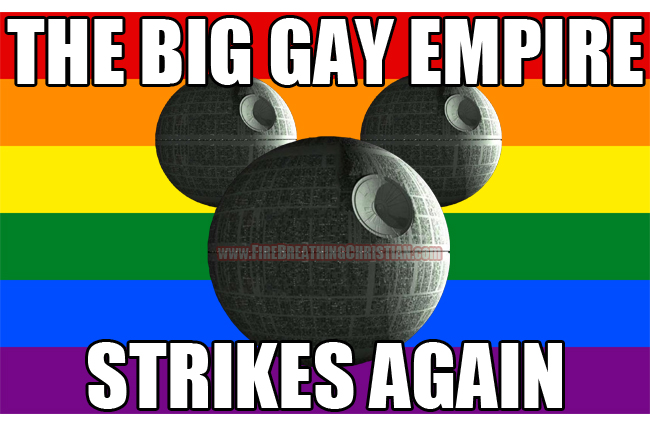 “I felt a great disturbance in the Force, as if millions of voices suddenly cried out in terror and were suddenly silenced. I fear something terrible has happened.”

J.J. Abrams is paving the way for Star Wars to be sodomized.

This is how pagan tolerance works. This is what pagan progress looks like. And this is what happens when Christians run away, hide, and preemptively surrender culture-shaping wonders like film, fantasy, and science-fiction to the enemies of Christ. This is what happens when Christians reject the command that Christ has given to take every thought (and thereby every action) – including every artistic thought – completely captive to Him (as per 2 Corinthians 10:5) while teaching others to do the same (as made plain in Matthew 28:18-20).

The longer we refuse to be the salt that seasons the culture in accordance with the Gospel-fueled Great Commission, the more deeply we will watch the arts sink into darkness and the more we as Christians will find ourselves appropriately trampled underfoot by those left (through our apathy, laziness and rejection of Christ’s commands) to dominate and control the culture.

“You are the salt of the earth, but if salt has lost its taste, how shall its saltiness be restored? It is no longer good for anything except to be thrown out and trampled under people’s feet.”

When we excuse ourselves from obedience to the mission He has commanded and equipped His people to undertake, we become the primary problem in the culture far and above any pagan person or group. In this, we earn  – we beg for – our own persecution. We secure our being trampled underfoot…which is exactly what is happening and has been happening in American culture for many generations now.

This revelation should inspire conviction and repentance, which would then result in a purified and empowered body of Christ finally winning victories by His grace through His Gospel, but so far in America there are precious few signs of such repentance and restoration.

By Abrams’ logic, the sprawling Star Wars universe couldn’t possibly exist without a gay populace—even if we haven’t seen a single character identified as gay thus far. “I would love it,” he said. “To me, the fun of Star Wars is the glory of possibility. So it seems insanely narrow-minded and counterintuitive to say that there wouldn’t be a homosexual character in that world.”

The answer is a resounding “yep” on both counts, of course, but let’s not focus there, okay?

Let’s not make this episode into yet another chronicling of the decline of Western culture under the guidance of Christ-hating evil empires like Disney and pagan creative talents like J.J. Abrams.

Sure, we can and should make note of all o’ these things, but let’s not stop there.

Let’s instead spend more of our energy considering how we as Christians have enabled this situation to come about and how we might, by God’s grace and through His Great Commission, take up the challenge to engage the enemies of Christ in the realm of the arts and “take every artistic thought” – and thereby every artistic action and product – “captive to Christ”.

Let’s take up the challenge to write some Christ-glorifying and – this part is important: high quality – sci-fi. (I’ve been convicted and inspired in this manner myself, committing as of yesterday’s news to seriously pursue a sci-fi adventure I’ve let sit nearly still for a very long time now.)

Let’s produce high quality science fiction books and films drenched in and defined by the deep, beautiful theology of Jesus.

Let’s repent of our past cowardice and preemptive surrender of vast swaths of culture to the enemies of Christ.

Let’s take up the mission that we’ve been given and use all the time, talent and treasure that He’s given us to engage His enemies in this realm and seal the gaping breach that’s made us vulnerable to high quality, carefully produced, culture-moving tools like Star Wars.

Remember: A limp-wristed Star Wars is just another consequence of the limp-wristed gospel that’s dominated and defined American Christianity for generations now.