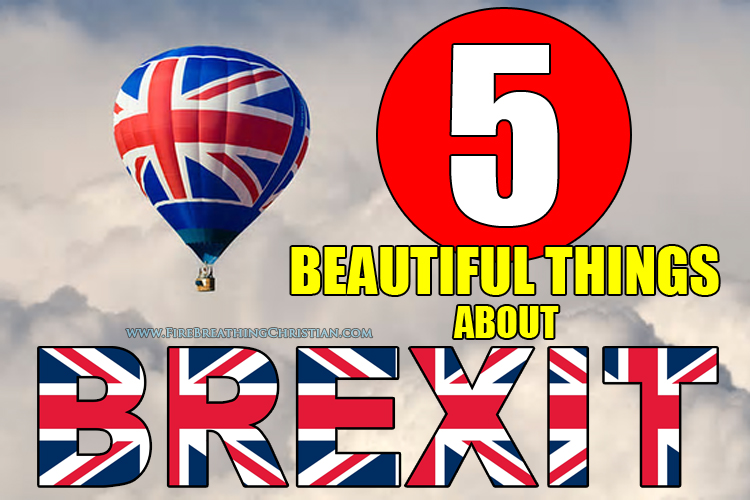 To the great shock and disappointment of millions and millions of globalists, elitists, and dispensationalists across the globe, and in spite of all the fear-mongering, political pessimism, late-breaking polling data, and a general expectation of failure by many Christians enmeshed in a Left Behind style rapture-based “end times” perspective, Britain voted to abandon the European Union. (This situation is so delicious on so many levels that we couldn’t resist satirizing it over at The End Times satire site in an article entitled Britain Abandons EU, Leaving Millions Of Globalists And Dispensationalists “Shocked, Disappointed And Angry”.)

And at 52%-48%, the vote wasn’t even “razor’s edge close”. Four points, though not a landslide blowout, is a solid win nonetheless.

In the aftermath of this big, beautiful blow for the wonderfully biblical concept of decentralization, it seems like a good time to take stock of the situation and make note of a few key gems of goodness to be found in the beauty of Brexit.

I’d like to share five of those gems for your consideration here, but first let’s revisit and remind ourselves of some key points leading up to yesterday’s historic vote.

Earlier this month in Why Brexit Scares DC To Death (And why that’s a beautiful thing), we noted the following (and also had a podcast dedicated to the same subject, which you can access here):

Any guess as to how those American Statists are feeling this morning?

Yeah, it makes me smile too…

But before we go getting all giddy to the point of neglect while basking in the beauty of Brexit, let’s make note of a couple significant points of warning:

With those two important qualifiers noted, let’s have a happy look-see at Five Points of Brexit Awesomeness:

I hope that these points are helpful and in some way might be used to inspire God’s people to praise His name and take up His Gospel-fueled Great Commission with vigor, confidence, and joy.

We are truly living in amazing times…and purposefully so.