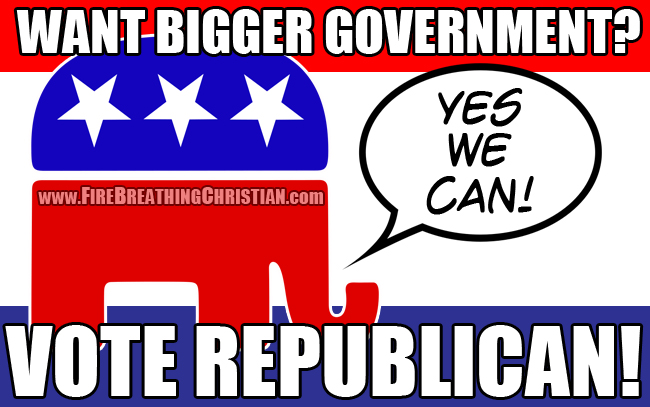 How long has paganized “conservatism”, often as wielded by the Republican Party in America, been actively escorting the culture to hell as the Left’s wingman?

Oh sure, the pace has quickened as of late and now we’re seeing “conservatives” argue for all manner of overtly anti-Christian evil in the name of All-American pride and patriotism, but the path we’re on now was charted for us a very long time ago.

To help make that point clear, I’d like to share a quote here from R.L. Dabney, chronicling the American “conservatism” that he witnessed in the 1800s. I will add some bold emphasis and my own comments in bold red print.

“ . . . This [Northern conservatism] is a party which never conserves anything. Its history has been that it demurs to each aggression of the progressive party [Meaning: It always caves. And isn’t that exactly what American “conservatism” has proven to be all about since Dabney wrote these words?], and aims to save its credit by a respectable amount of growling, but always acquiesces at last in the innovation. [The American “conservative” is all about big talk – often very big talk – while never taking a firm, biblical stand against progressivism.] What was the resisted novelty of yesterday is today one of the accepted principles of conservatism [Remember: It is American “conservatives” who now defend the “necessity” of the welfare state, the warfare state, and everything in between, including the “right” to build mosques and openly worship Allah or Satan in America, as well as the “right” to abortion and “gay marriage.]; it is now conservative only in affecting to resist the next innovation, which will tomorrow be forced upon its timidity and will be succeeded by some third revolution [10-20 years from now, if we make it that far, “conservatives” are likely to be defending as necessary the very things they talk big about and pretend to oppose now.]; to be denounced and then adopted in its turn. American conservatism is merely the shadow that follows Radicalism as it moves forward towards perdition. [!!!] It remains behind it, but never retards it, and always advances near its leader. This pretended salt hath utterly lost its savor: wherewith shall it be salted? Its impotency is not hard, indeed, to explain. It is worthless because it is the conservatism of expediency only, and not of sturdy principle. It intends to risk nothing serious for the sake of the truth, and has no idea of being guilty of the folly of martyrdom. . .”

Something to think about as we do our parts here and now to advance the Kingdom of God in the fading shadow of a dying American Empire.