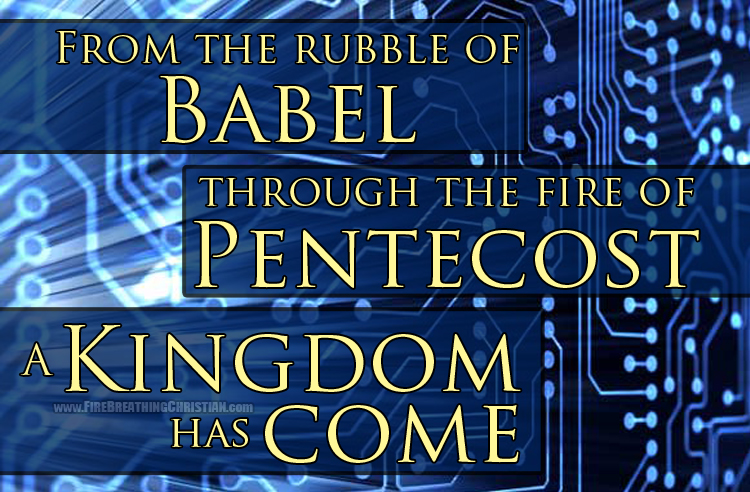 From the rubble of Babel through the fire of Pentecost, a Kingdom is rising.

All along the way each of them leaves behind various tools and technologies through which He continues to bless His people as they advance His Kingdom, all by His grace and all for His glory.

Yesterday in As America Begs For Tyranny To “Save It”, The Kingdom Of God Advances On All Fronts, we considered America’s pride-fueled plunge into oblivion and how we ought to approach the scads of incredible opportunities that are upon us now and the many more that will soon come.

To further encourage the sort of Christ-centered Big Picture that should have us jumping for joy and happily, excitedly setting our noses to the grindstone to advance the Kingdom, I thought it might be cool to explore one aspect of Pentecost that I find incredibly invigorating and supernaturally inspiring to the point that I think my head might literally pop every time I stop to think about it.

I figure that if it gets to me that way, you might like it, too, so here goes…:

One of the more interesting aspects of Pentecost as recorded in Acts 2 is the manner in which, when the Spirit of God comes upon His people, He gives them the supernatural ability to understand one another even though they are speaking in languages that are (or were) foreign to one another. In this, God literally undoes or reverses the confusion of language and dissolution of culture and civilization that He brought upon the powers and people behind the Tower of Babel as recorded in Genesis.

The language-related details from these events as recorded in Genesis and Acts are hardly small. They’re not minor details. They’re major. They’e what Donald Trump might call yuge if he’d ever had them brought to his attention.

These language details are of critical importance to the building of – or inability to build – culture and civilization to its highest levels.

God took that potential away from men at Babel.

God gave that power to His people at Pentecost.

Let’s look at the relevant passages from Scripture (with bold emphasis added), beginning with the events at Babel as recorded in Genesis 11:1-9:

Now the whole earth had one language and the same words. And as people migrated from the east, they found a plain in the land of Shinar and settled there. And they said to one another, “Come, let us make bricks, and burn them thoroughly.” And they had brick for stone, and bitumen for mortar. Then they said, “Come, let us build ourselves a city and a tower with its top in the heavens, and let us make a name for ourselves, lest we be dispersed over the face of the whole earth.” And the LORD came down to see the city and the tower, which the children of man had built. And the LORD said, “Behold, they are one people, and they have all one language, and this is only the beginning of what they will do. And nothing that they propose to do will now be impossible for them. Come, let us go down and there confuse their language, so that they may not understand one another’s speech.” So the LORD dispersed them from there over the face of all the earth, and they left off building the city. Therefore its name was called Babel, because there the LORD confused the language of all the earth. And from there the LORD dispersed them over the face of all the earth.

“Let us make a name for ourselves.” This is always the battlecry and anthem of the collectivist and the Statist, be they Roman, Russian, or American in flavor. The Statist always seeks to use the power of the collective to build culture and civilization apart from subjugation to God.

God will not allow this.

Which is why a proud, unrepentant America is being ground under His heel even as I type these words.

Now on to the events on Pentecost as recorded in Acts 2:1-12:

When the day of Pentecost arrived, they were all together in one place. And suddenly there came from heaven a sound like a mighty rushing wind, and it filled the entire house where they were sitting. And divided tongues as of fire appeared to them and rested on each one of them. And they were all filled with the Holy Spirit and began to speak in other tongues as the Spirit gave them utterance.

Now there were dwelling in Jerusalem Jews, devout men from every nation under heaven. And at this sound the multitude came together, and they were bewildered, because each one was hearing them speak in his own language. And they were amazed and astonished, saying, “Are not all these who are speaking Galileans? And how is it that we hear, each of us in his own native language? Parthians and Medes and Elamites and residents of Mesopotamia, Judea and Cappadocia, Pontus and Asia, Phrygia and Pamphylia, Egypt and the parts of Libya belonging to Cyrene, and visitors from Rome, both Jews and proselytes, Cretans and Arabians—we hear them telling in our own tongues the mighty works of God.” And all were amazed and perplexed, saying to one another, “What does this mean?”

Yes, very, I know, but how cool is what it means?

How cool is the purpose here?

Well, there are many purposed in this, of course, but let’s focus here and now on what it means for building and growing and doing amazing things to shape culture and civilization.

What has God brought forth in that regard through the reversal of Babel exclusively for His people?

Praise God for that.

Then pray for clarity and figure out what you’re supposed to do in light of the incredible reality of what God has given you, all by His grace, all for His glory, and all for the purposes of advancing His Kingdom.

The enemies of Christ in Washington DC, Hollywood, New York City, in your State Capitol, and in your county seat do not have this. They are under Babel. They’re wandering in the ruins.

God’s people have not been left in that place.

God’s people have been liberated.

God’e people have been empowered.

God’s people have been given a mission; a Gospel-fueled Great Commission, and that mission cannot fail. Victory has been secured. Every knee will bow to Christ, every tongue will confess His majesty, and every corrupted thing in His creation will be reconciled to Him through the power of His blood and His work on the cross (see: Colossians 1:15-20).

His enemies will ultimately be swept away from the land just as in the days of Noah, and His people will inherit His earth.

Every thought and action in every realm of His creation will be ultimately be taken captive to Him (in accordance with 2 Corinthians 10:5), through people who literally have the Third Person of the Trinity dwelling within, making them His body on His earth (Romans 12:5; 1 Corinthians 12:27).

So let’s act accordingly, shall we?

We have much supernatural life-, culture- and civilization-restoring work to do…and we’ve been perfectly equipped by our King to do it.

If you’re encouraged and invigorated by these words, please share this article with others and consider supporting our mission if you are able.