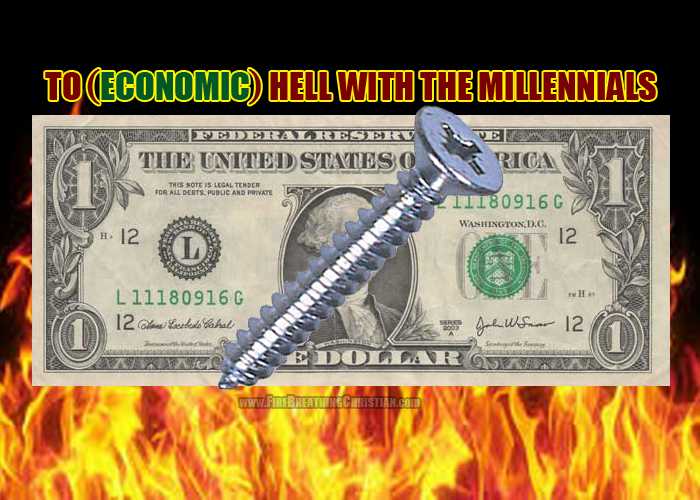 As I write this, financial markets are bouncing near all-time (artificial) highs, with the Dow hovering around 20,000 (a point that also played a central role in last week’s article, “Making America Great” Through Anti-Christian Economics.)

This sky high (and then some) market exuberance is in no small part due to the next wave of anticipated bailouts of “too big to fail” banks and businesses through the black magic of our fiat economic system.

In case you haven’t heard, after Obama’s mountains of debt spending which followed eight years of ginormous government growth under Dubya, we’re now gonna “Make America Great Again” by – you guessed it! – spending tons of fake money on tons of cool stuff; everything from propping and/or expanding the satanic/Marxist constructs of Social Security and public schools to the funding of ginormous military buildups and road/rail/everything-else improvements is on the table.

And of course, while the fake money printing presses roll and the debt burden dumped on future (and present) generations moves from the absurd to the unbelievable, members of the “Greatest Generation” – you know, the ones who oversaw the launching of most of the Marxist programs we now take for granted in America – along with many from subsequent generations will spend significant amounts of their time and energy berating and belittling the stupid, lazy, self-absorbed, emotion-driven little Precious Snowflakes known as the Millennial generation.

Back in September (in The Economic Hell That’s Been Left For Millennials And Everyone Else) we noted that:

“For all the reasonable criticisms and concerns that are often lobbed towards Millennials as a group, there are at least as many dishonest, self-serving, and often flat out wicked insults added to the mix.

They were born into this socialist sewage, with key ingredients of said sewage (like the aforementioned public schools and Social Security) now defended and propped up at every turn by the very “conservative Christians” who are often quickest and loudest with their insults concerning “those entitled, lazy little brats” in the Millennial generation.”

So here we are at the tail end of 2016, about to head into another year of more-of-the-same gigantic American State “solutions” aimed at adding even more debt, bondage, and dependence to present and future generations of Americans, all while encouraging them to sing about how free and brave they are, of course.

And at the very bottom of this crumbling, crushing pyramid of debt lies the much maligned and openly mocked Millennial Generation (at least until their kids arrive in force to provide us with a new whipping boy to take on both our insanely hypocritical derision and our massive, murderous debt).

If Millennials ever somehow manage to actually wake up as a group and discover how they have been completely sold up the river by the generations that preceded them, there will be no safe place from their rage.

They are the product of their parents and grandparents.

They are the product of the public schools those parents and grandparents have enabled, defended, and dutifully trusted to shape the minds and worldviews of their little ones.

The Millennials are that product.

And that product ain’t lookin’ so good overall and in general, as we all seem to know and enjoy talking about.

So what do we expect them to do if and when they realize what’s been done to them?

What do the “brilliant, principled, conservatives” who just love to rail and whine and moan about Millennials expect to happen when that generation awakens to the reality that it’s been sold out and betrayed into bondage, ignorance and darkness?

Think it through, “conservatives”.

Consider the Marxism/Socialism that you’ve enabled, supported and personally “benefited” from again and again and again all while supposedly knowing that it could never really work in the long run. Then take a look at a Millennial and realize that they are the ones who are both the product of your neglect and the likely fall guy generation for your long running pagan Ponzi schemes (a la Social Security).

So if Millennials really are as hated a group as they seem to be these days, those who are doing the hating can rest assured that the Precious Snowflake generation is soon likely to be experiencing a very real sort of hell on earth.

But what those doing the hating and the mocking and the maligning might want to remember is that the hell about to be unleashed on these Precious Snowflakes is a hell that has been under construction for about 100 years now.

It’s a hell that even now we’re trying to prop up with another wave of fake money and fake market manipulations. Anything to keep the lie going for just…a…little…longer…

Anything to avoid repentance.

Anything to keep pretending.

Just don’t think that those at the very bottom of the Ponzi pyramid are going to keep pretending and playing along.

They will be forced to deal with realities long avoided by those who came before them.

And when that finally happens, they will be mad.

There will be rage.

Things will get ugly.

And why shouldn’t they?

Isn’t this just the sort of price – the sort of natural consequence – that we should assume would ultimately result from our multi-generational rebellion against the Word of God on economics, business, law, and civil government?