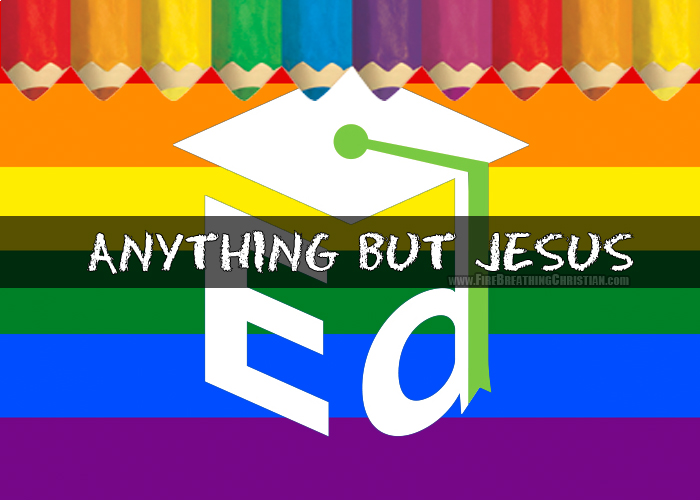 With President-elect Trump opting to select yet another Secretary of Education rather than moving to dismantle the Department of Education, it seemed like a good time to note how it is that “conservative Christians” in America have become willing accomplices and tools of the American State in building, defending, and expanding the systematic anti-Christian approach to children’s education that has shaped the culture in which we live.

They want American children to learn math and language skills (so that they might be better equipped to meet the needs of the Corporations and State that “educated” them).

They want American children to learn history (from a decidedly American Corporate/State-centered perspective, of course).

They want American children to learn about American icons and idols, like the Founding Fathers and the Constitution (again, from an acutely pro-American perspective that would shield said icons and idols from any sort of serious biblical examination or testing, much less criticism).

American “conservative Christians” want all of these things pursued in public schools, and vigorously so.

They want all of these things to be a part of every American child’s education.

They fight hard for these things.

They spend millions (and even billions) of dollars championing these things as essentials of children’s education.

But what about Jesus?

Oh, and the Jesus who lovingly requires that He be the explicit centerpiece of all children’s education (see: Deuteronomy 6).

Why are studies of His creations and possessions like math, history, language, and art all deemed “essential” components of children’s education from the perspective of the so-called “conservative Christians” trying to “save” public schools, yet Jesus Christ is not?

How could such a thing even be thinkable to a Christian?

How is it that Jesus Christ is not only non-essential to the education of American children, but, apparently, must be ignored as the Author, Definer and Sustainer of all lesser, created things being studied?

See how irrational and downright idiotic it is when you just take a moment to think about it? (Which is presumably why American public schools and most American “conservative Christian” advocates of said schools don’t encourage anyone to take a moment to seriously consider such things.)

Why is Jesus Christ treated in such a manner by legions of “conservative Christians” roaming the American countryside?

Why is the Author, Definer and Sustainer of all things cast aside and dismissed this way?

Why are so many so-called “Christians” constantly arguing for a thoroughly satanic approach to knowledge and education in America (and all over the world)?

Because they have been programmed by the same anti-Christian State propaganda that they now seek to impose on future generations, that’s why.

They will fight – and fight hard – for the inclusion of their idols and icons in children’s education because they truly believe those idols and icons to be essential to the betterment of American lives, American culture, and American civilization.

Those idols and icons are essential.

Do you see the devil smiling now?

If not, look closer.

If so, repent (and educate) accordingly.