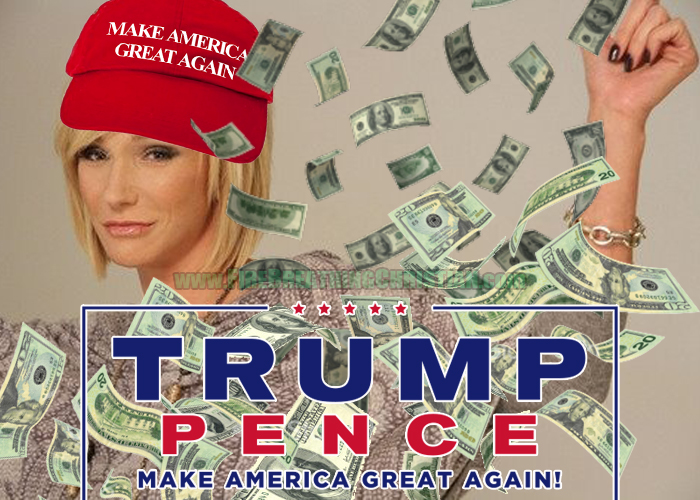 Who needs to actually repent of a satanic economic system built upon magical fake money printed out of thin air when you can just go on and on doing more of the same?

Who needs to actually repent of truckloads of satanic/Marxist constructs like Social Security and public schools when you can just keep ’em going for another week, month, and year by just printing more and more fake money?

Who needs biblical repentance and submission to Christ as Lord in the realms of economics, business, government and politics when you can just print limitless piles of fake money to keep the Great American Economic Tower of Babel propped up for another day?

As has been made painfully plain to anyone with eyes to see and two brain cells to rub together, the whole “Make America Great Again” pitch is built completely around sustaining, tweaking, and, in many instances, expanding the satanic economic construct under which we currently (albeit temporarily) live.

This has never been in doubt, of course. Every word uttered by Donald Trump (and the few details contained in them) has conveyed the same basic theme on all things economic. In summary, The Donald is all about The System that is built on black magic fiat economics.

As for insights into the many intersections between economics, business and theology in the world and worldview of Trump, we’ve gotten two beauts in recent weeks to go with the mountains of disconcerting evidence already in hand. The two beauts to which I refer are President-elect Trump’s choice for heading the SBA (which we tackled in some detail here) and his choice to handle prayer duties at his inauguration.

Trump’s pick to head the Small Business Administration – Linda McMahon, the vice-peddling, power-coveting former head of that cultural diarrhetic known as World Wrestling Entertainment – told us a lot (though not much new) about where Trump is at. His pick to pray over his inauguration tells a lot, too.

It tells us a lot about his wisdom.

It tells us a lot about his understanding of Christ.

It tells us a lot about his understanding of Christ’s creations of economics, business and civil government.

It tells us a lot about his grasp on the meaning of greatness and, thereby, his ability to lead America anywhere near or even toward true greatness.

And it tells us a lot about just how comically blind and given over vast swaths of self-identified “conservative Christians” in America have become.

With things like the selections of McMahon and White, even garden variety pagans can see through the farce of “Trump Christianity”. Not all pagans, of course, and certainly not some of the thoroughly paganized leaders dominating much of American Evangelicalism, but, even so, many unbelievers are not only noticing but noting the laughably incoherent, inconsistent, and flagrantly unbiblical approach to reality that defines Trumpism and its legions of loud, proud and unrepentant adherents.

Today the 58th Presidential Inaugural Committee announced the list of “faith leaders” who will be involved in President-elect Trump’s inaugural ceremonies:

Those offering readings and giving the invocation at the ceremony are His Eminence Timothy Michael Cardinal Dolan, the Archbishop of New York, Reverend Dr. Samuel Rodriguez of the National Hispanic Christian Leadership Conference, and Pastor Paula White of New Destiny Christian Center.

Paula White has a long history bankruptcies, failed business ventures, and unsuccessful marriages, which makes her the perfect choice to deliver a prayer on behalf a president-elect who has proudly proclaimed that he’s never felt the need to ask forgiveness from God for anything.”

So there we go.

No concept of repentance.

Treats marriage vows like minor nuisances to be trampled at will.

Hardly sounds like a supernaturally saved New Creature in Christ with the Spirit of God – the third Person of the Trinity – actually living within them and inherently inspiring a desire for holiness, a hatred of sin, and a conviction/repentance/reformation theme in life that is evidence of said supernatural conversion.

But to hear some “Evangelical leaders” (like Dr. James Dobson) talk, this is just the kind of behavior we should expect from a “baby Christian” like Donald Trump.

Oh, and who is it that supposedly “led Trump to Jesus”?

You guessed it: Paula White.

“In case you’re not familiar with Paula White, she’s a prominent figure in the so-called “prosperity gospel” movement which teaches that God wants people to be healthy, happy, and rich. Any failure to obtain the aforementioned blessings signals a lack of faith or perhaps some sin in the Christian’s life. . .

White claims close ties with President-elect Trump. She told Politico in July that she’s known him for 14 years, ever since he saw her on TV and said “she’s fantastic” and the two met on her next trip to New York.

“I can absolutely tell you that Mr. Trump has a relationship with God. He is a Christian, he accepts Jesus as his Lord and savior,” White said.

She cites as proof of Trump’s deep faith the times she saw him shake hands with construction workers in New York or Hispanic groundskeepers on his golf courses.

“There’s a lot of people that have influenced Mr. Trump’s life,” she said. “One thing I can tell you, that absolutely might be new to some of the media, new to some people, but God is not new to Mr. Trump. He absolutely has a heart and a hunger and a relationship with God.”

. . . White and her ex-husband Randy White have parlayed their TV ministry into a financial windfall. At the height of their popularity, their Without Out Walls International Church and broadcast ministry in Tampa was reportedly pulling in $40 million a year in donations. The co-pastors were collecting between $600,000 and $1.5 million a year in compensation. Plus there were book deals and TV appearances that went along with what they were paid by the ministry. At one point, according to the Tampa Tribune, Paula White’s broadcast business, Paula White Ministries, was bringing in $50,000-$80,000 a week.

At one point White lived in a $2.2 million waterfront Tampa Bay home, owned several Mercedes, a condo at Trump Park Avenue, and a $3.5 Trump Tower apartment.

But the facade began to crumble when the Tampa Tribune published an investigative series on the ministry’s lavish spending on exorbitant salaries and use of private jets and Rolls Royces. That was followed by an IRS investigation in 2004 that led to a U.S. Senate probe in 2007, spearheaded by Iowa Republican Sen. Chuck Grassley. The probe was eventually dropped, although White’s ministry didn’t fully respond to congressional inquiries, according to reports at the time.

The ministry sold off its Gulfstream jet as donations dried up. The Whites, who began their relationship while both were still married to others, divorced in 2009. It was the second divorce for both of them.

Next, according to Orlando Weekly:

A sensational tabloid exposé on the cover of the National Enquirer linked Paula White with fellow (and separated but still married) televangelist Benny Hinn in a romantic tryst in a five-star Rome hotel. Hinn, another prosperity gospel proponent, was registered in the presidential suite under the biblically suggestive name “David Solomon.” White denied the affair, but Hinn later acknowledged an “inappropriate relationship.

White’s ratings and the number of outlets for her broadcasts plummeted in the wake of the multiple scandals. Attendance at Without Walls in Tampa also tanked. A satellite church in Lakeland, Florida, with a 10,000-seat sanctuary, was abandoned in 2012 and filed for bankruptcy in 2014 after a Christian credit union threatened to foreclose on the property, citing the ministry’s failure to maintain payments on $25 million in loans. The property was eventually sold off.

“Paula represents everything that is wrong with American religion,” Ole Anthony, founder of the Dallas-based Trinity Foundation, a religious watchdog organization, told Orlando Weekly. “No accountability, the jet-set lifestyle, divorces and affairs that seem to never end. She’s left a trail of destroyed churches behind her.”

. . . Paula White resurfaced at another church in 2012—New Destiny Christian Center—to begin her comeback. White, who is now married to Jonathan Cain (of rock band Journey fame), presides over glitzy and ostentatious services that are fueled by choreographed light shows, pulsating music, and dancers that lead up to the main event. The 50-year-old White, usually clad in skin-tight dresses or pantsuits (and sometimes thigh-high boots), prances around the stage to preach her gospel of health, wealth, and prosperity and offers to lay hands on those suffering from health problems—and of course ask for donations from viewers at home. The church boasts a membership of 10,000 and one site puts her net worth at $5.2 million. The prosperity gospel, even when it fails to deliver what’s promised, pays well for big-name leaders who have learned how to coax donations out of gullible viewers at home who truly believe they will receive their miracle by sending money to the TV preacher.

Of course, apart from the supernatural intervention of God, none of this will matter to the Kool-Aid swilling “Make America Great Again” (through satanic means) cult.

Only the grace God can open eyes and bring dead, self-referential, self-serving hearts to life in true, faithful service to Him. Only God can move people to repent and submit of the many satanic counterfeits defining our age in the realms of economics, politics, business and government. Only God can raise dead people, families, cultures and civilizations to life through His Gospel-fueled Great Commission.

Only the Spirit of God can move “We the People” out of our suicidal death spiral and away from the delusion that unbiblical economics, law, business, and politics can ultimately work anywhere in His creation…even when a Republican is spearheading the effort.