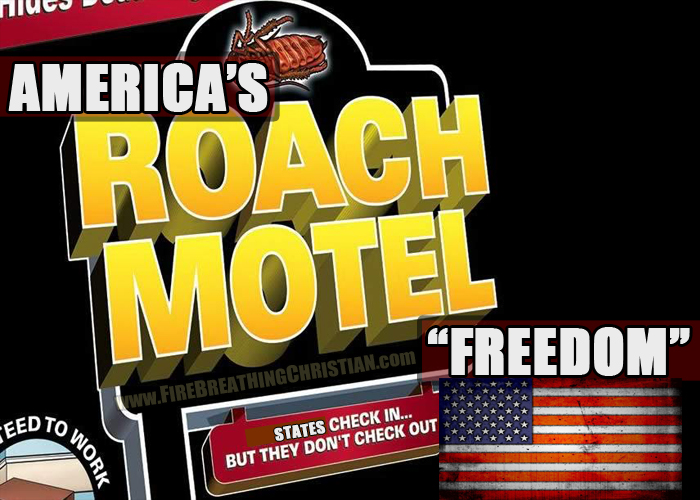 Back in the day, there were some nifty little commercials for something called a “roach motel”. The actual item being advertised was a small black bug-killing box that would attract unsuspecting victims in and then never allow them to leave. This clever product was smartly marketed using the tagline: “Roaches check in…but they don’t check out.”

Or so the powers-that-be would like for us to believe.

But this idea really doesn’t fly at all once you take just a few seconds to think about it…which is why the same powers-that-be would like for us to not give the subject a first, much less second, thought.

The System of systems under which we now (temporarily) live in America has good reason to distract us from such consideration since, if we do bother so finally stop and notice just how mind-blowingly idiotic (and incredibly dangerous) the notion of indivisible political unions really are (even when wrapped in red, white, and blue), then we might…well…at least begin to move toward seriously considering dissolving the mind-blowingly idiotic and incredibly dangerous beast of a political system that is presently aiming to drag us deeper and deeper into open warfare against God.

But here in America, after generations of State-run children’s “education”, they sure do think they are.

Of course, the promotion of such (centralized) State-empowering notions is just the sort of thing we should expect from State-controlled “education”. Wondering why each generation of Americans entrusted to the State for education has gone on to become more anti-Christian and more pro-Statsist that the last is not something anyone should be doing. What’s to “wonder” about? This is exactly what State-run “education” was designed to accomplish.

In getting back to the idea of people dissolving abusive political unions, please consider the following:

And if, over the past 100 years or so, generation after generation of Americans programmed to unquestioningly embrace the tragi-comedic notion of an “indivisible political union” ended up (quite predictably, through State-run “education” and 501(c)(3) sanctioned religion) tolerating, enabling and even encouraging the birth and perpetual expansion of such overtly Marxist/satanic constructs as Social Security, public schools, and the fiat currency that fuels them both, why on earth (or anywhere else) would the thinking, biblically-minded members of generations coming into their own today continue to play along with such an idiotic (and, again, dangerous) idea?

Should the people of [insert individual U.S. state here] really be committed to the proposition of remaining under the authority of Washington DC no matter how deep into hell it drags them?

Yes, really…if you believe what the All-American Corpo-State System of Systems tells you through its media, its schools, its politicians, its teachers and its preachers.

The American Indivisibility thing – a suicidal death pact advocated by everyone from the Pagan Political Right’s Mark Levin to the Pagan Political Left’s roving gang of “child educators” – is a hook by which we are meant to be kept in place on our way to, and through, whatever anti-Christian Utopia lies at the end of the big gay rainbow.

You see, if we’re “good Americans”, we will not question America.

Those things are to be regarded as untouchable. (Untouchable idols, you might say.)

As such, if we properly “love America”, we will embrace our status as roaches in a box – signed, sealed, and delivered into unbreakable DC-bondage long ago by our great grandparents and the generations of U.S. citizens that preceded them.

If we “love America”, we’ll just shut up and obey America.

And that’s exactly what we’ve been doing for the most part over the past 100+ years.

Which is why we now have “legally protected” child sacrifice, the open “legal”worship of false gods, the “legal” sanctioning of “gay marriage”, and the elite-empowering black magic of fiat economics now dominating and defining our land and culture.

This is what happens when the State becomes God in practice.

This is why the Pagan Political Right and Pagan Political Left are on the same page with things like the “indivisible” nature of the Union and, in being on that same page, reveal themselves to be two wings of the same truth, liberty, and freedom devouring dragon.

They just can’t imagine – or allow others to imagine – life as a truly free people, where Christ is Lord in practice and His Word is the standard by which all things are understood, pursued, and applied in detail.

To them, once our great (or great great) grandparents decided to join this thing called The Union, we are all committed to never even having the option of leaving.

Only we didn’t even walk into the stupid little black box.

We were born into it.

Either way, from the American Statist’s perspective, we can never be allowed to leave.

Or even think aloud about leaving.

No matter how much DC tyranny grows.

No matter how much the concepts of family, marriage, and even gender are trampled under DC’s watch and guidance.

No matter how much of a smoldering hellhole our culture becomes.

No matter how far down the drain we go, we’re supposed to just suck it up and endure The Union like good little State-programmed Americans.

The fifty states had the option to join the United States, you see.

But once in, they can never leave.

How free does that sound?

Tagged FreedomLibertyRoach MotelStates Can Check In But They Can't Check Out