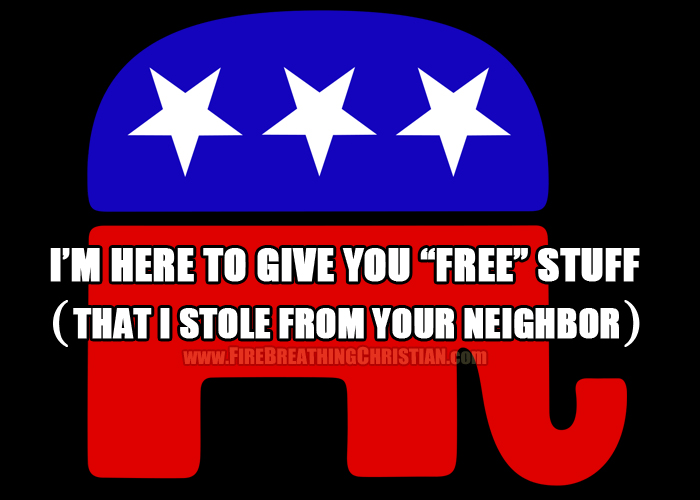 This is a direct quote from a prominent American politician, taken from a statement made just last week.

The “leader” in question said this out loud and on the record while standing on a stage speaking to people and press.

So which tool of pagan progressivism uttered this tragi-comedic line?

Which radical, State-empowering Democrat or Leftist let fly with this lingo?

Why Republican Governor of Tennessee Bill Haslam, of course.

As reported by the Tennessee Star earlier this week, Governor Haslam actually (and probably accidentally) let his true colors show a bit more than his handlers would have liked at the Smith County Rotary Club last Friday. (You can hear it for yourself at the 16:50 mark in the video embedded in the article, which you can access by clicking here.)

The Tennessee Star piece also made reference to a noteworthy bit of context where Governor Haslam’s pitching of a stark raving Socialist worldview is concerned:

“The only reason government exists at all is to buy things for the people that they can’t buy for themselves,” Gov. Haslam told the Smith County Rotary Club on Friday as he continued to promote his proposal to increase the gas tax by 7 cents per gallon.

But the Governor’s pitching of a(nother) tax hike is only part of the story here.

In his annual State of the State Address earlier this year, Governor Haslam offered an agenda centered on two things: 1) Raising taxes and…you guessed it…2) giving even more stuff away, this time in the form of “free” college to all adults in Tennessee.

I put quotes ’round the word free there since, obviously, this new wave of proposed “free”” stuff will, as always, actually be paid for using wealth confiscated and redistributed by the State. Which is, of course, what Statism and Socialism are all about…which is what both the Pagan Political Right and Pagan Political Left wings of the Pagan Progressive Dragon are all about.

This is what they actually believe…or at least what they want us to believe.

This is how they control us and hope to continue controlling us.

And so far it’s working.

But one day soon – much sooner than most now imagine possible – their gig will be up. The mass-enslaving, elite-empowering fiction that they peddle will be revealed to be just that: a fiction.

The social, economic, and political Jenga Tower of Babel that they’ve worked so hard to build and prop up as it soars into the sky is about to come crashing down, and, when it does, those who stand on its ruins looking back to years like 2017 will wonder what caused so many professing Christians in Tennessee and throughout America to become so feeble, stupid, and easily led that they would endure and even embrace leadership like what we see now in state capitols all across the DC-dominated “land of the free” and home of the NSA.

They will wonder what we were thinking.

And probably what we were smoking.

They will likely wonder what we were reading, what we were believing, and why, if we were actually reading our Bibles, we never seemed to actually believe them when it came to forming our approaches to politics, economics, education, law and government.

Maybe if we start wondering more about these things right now, we can speed up the process a little and put our attraction to Pagan Political Right leadership in the rear view mirror for good.

Maybe “the reason government exists” is something we should think about biblically for a change, no matter how loudly the secular “experts” howl around us and tell us that we just can’t approach government that way here in America.

Maybe the reason they howl is because they know that if we start thinking and, more importantly, acting biblically about these things, they will soon find their power gone.

No more State-run theft and redistribution of private wealth.

No more State-managed anti-Christian/pro-Statism children’s “education”. (Which is the single most important cog in their Socialist State-run machine, it should be noted.)

No more “free” wealth stolen from others with which to fund their mass-enslaving, elite-empowering Statist agendas.

And no more mind-blowingly stupid explanations as to the nature of civil government as it actually exits in God’s creation.

We have a lot of work to do to get there, but make no mistake: We are going there.

Tagged "The only reason government exists is to buy things for people that they can't buy themselves."Bill HaslamRedistributionStatismTaxesTennessee