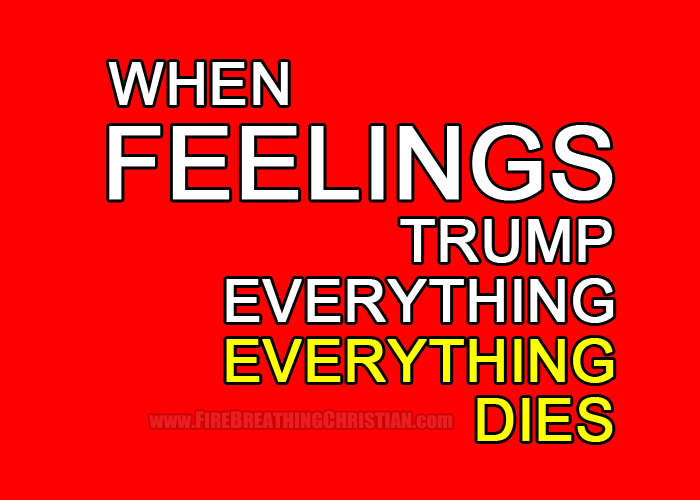 But we’re not thinking much, if at all, these days.

Dying as slaves; slaves to emotion.

According to Psychology Today, “The average high school kid today has the same level of anxiety as the average psychiatric patient in the early 1950s.”

Lest there be any confusion, I’m no fan of Psychology Today. Even so, the point made stands and reflects exactly the sort of reality we should expect to find in an emotion-drenched, self-absorbed culture such as ours.

Ask the average American – including the average professing “conservative Christian” – why they do or do not do something, and they will far more likely than not begin their explanation with a presentation of their precious feelings.

Feelings have become the starting point for everything in American culture.

I  do/don’t want to [insert action here] because I feel [insert emotion here].

That’s the launchpad from which every action, aversion, hope and fear seems to be approached these days, even with professing Christians, and as Christians have modeled this self-referential, navel-gazing worldview to others for such a long time, we really should be the least surprised of all people now that the rest of the culture has caught up (or down) to us.

Our fear of frustration, betrayal, abuse, confrontation, loss, gain, prosperity, poverty, closeness, isolation and everything else has left us – and the culture in which we live – paralyzed by fear – fear of everyone and everything but the Lord.

This slavery to selfishness that’s come to define American culture can, will, and is now before our eyes destroying everything.

Everything is dying because everything has become self-referential.

Everything is relative – relative to us.

Or so we’ve come to believe.

It’s all relative here in America and throughout the West.

It’s all relative to and dependent upon how we feel at any given moment.

And while there is good reason to hope that this sad situation makes people feel a certain way, we’re all infinitely better served to focus on what we think, namely by testing all things, including our feelings and emotions, in light of what God thinks and requires us to think as reflected in His Word.

Whatever we feel at any given moment about church, law, marriage, gender, and everything else, we must strive – we are commanded and equipped to strive – by God’s grace, to conform our thoughts to His thoughts on these subjects, knowing that once we conform our thoughts, our actions will follow. Political actions, educational actions, artistic actions, economic actions – they will all be transformed.

As we live out this Gospel-fueled Great Commission thing, something cool will happen. Something very cool.

It may take a while, and the ride may be bumpy along the way, but our feelings will ultimately come along as directed by our God-given minds and disciplined actions. Our feelings will catch up.

Note that please: They will catch up.

They will not lead the way.

The wrong feelings of our past will fade into memory, replaced with new, far more vibrant, inspiring, and productive feelings centered on the Nature of God as revealed in His Word.

How’s that make you feel?

Before you answer, consider this:

Delight yourself in the Lord, and he will give you the desires of your heart.

I used to read that passage and think it meant that God would give His people what they wanted, with emphasis on “they”, as in: their desires as they‘d crafted them in their hearts and their minds based on their understanding. But the passage in question seems to be saying something quite different and infinitely better. It seems to be saying that as we, by God’s grace, go about the process of growing in delight in the Lord on His terms as reflected in His Word, He gives us new desires that conform with what He has revealed about Himself.

Now how cool is that?!

How does that make you feel?

More importantly, what does that inspire you to think…and do…in every area of life that God’s created and charged His people to master.

Thinking and acting upon this truth rightly is the key to experiencing a supernaturally joyful and productive life.

Emoting about it is not.