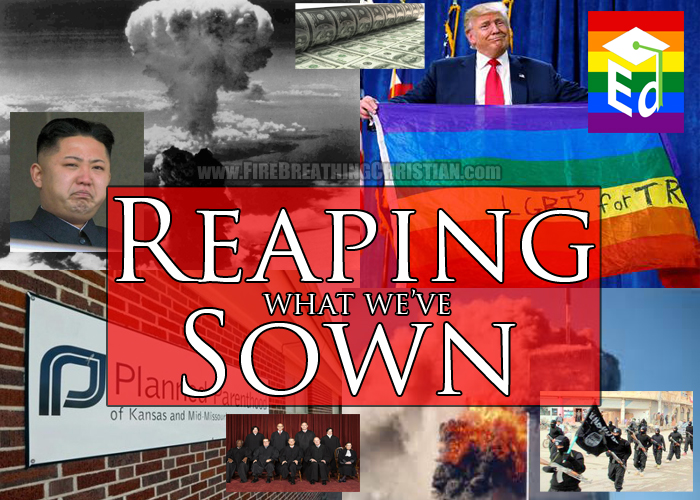 In case you haven’t noticed, repentance isn’t exactly “a thing” here in ‘Merica.

Without America, what would God do? What would He have to work with?

Not much, as far as Americans are concerned.

Which is why, when it comes to our many openly unbiblical approaches to business, politics, law, economics, art, and education, we have no interest in knowing, much less doing, what God has commanded us to do.

So you don’t see much, if anything, in the way of biblical self-examination leading to conviction, repentance, and reformation where things like economics, politics, law, art, business, war, education or anything else are concerned.

Put another way: We are being hardened.

The long-running, multigenerational pretendfest has to end.

The America idolatry has to die.

The America Idol has to be cast down.

In the meantime, we have…time…at least a little…

Time to proclaim and pursue truth.

Time to be saved.

In order to help us see a little more clearly that which should already be painfully clear, I want to share the following clip from an article posted recently at ZertoHedge. While I don’t necessarily agree with every detail shared, there is a whole lotta much-needed, painful, and hopefully conviction and repentance inspiring truth here:

“Who designed the malware worm that is now wreaking havoc on tens of thousands of computers internationally by hackers demanding a king’s ransom? The U.S. government.

Who is the biggest black market buyer and stockpiler of cyberweapons (weaponized malware that can be used to hack into computer systems, spy on citizens, and destabilize vast computer networks)? The U.S. government.

What country has one the deadliest arsenals of weapons of mass destruction? The U.S. government.

Who is the largest weapons manufacturer and exporter in the world, such that they are literally arming the world? The U.S. government.

Which is the only country to ever use a nuclear weapon in wartime? The United States.

How did Saddam Hussein build Iraq’s massive arsenal of tanks, planes, missiles, and chemical weapons during the 1980s? With help from the U.S. government.

Who gave Osama bin Laden and al-Qaida “access to a fortune in covert funding and top-level combat weaponry”? The U.S. government.

What country has a pattern and practice of entrapment that involves targeting vulnerable individuals, feeding them with the propaganda, know-how and weapons intended to turn them into terrorists, and then arresting them as part of an elaborately orchestrated counterterrorism sting? The U.S. government.

Where did ISIS get many of their deadliest weapons, including assault rifles and tanks to anti-missile defenses? The U.S. government.

Which country has a history of secretly testing out dangerous weapons and technologies on its own citizens? The U.S. government.

Are you getting the picture yet?

The U.S. government isn’t protecting us from terrorism.

The U.S. government is creating the terror. It is, in fact, the source of the terror.

Just think about it for a minute: almost every tyranny being perpetrated against the citizenry—purportedly to keep us safe and the nation secure—has come about as a result of some threat manufactured in one way or another by our own government.

In almost every instance, the U.S. government has in its typical Machiavellian fashion sown the seeds of terror domestically and internationally in order to expand its own totalitarian powers.

It’s time to wake up and stop being deceived by government propaganda.

We’re not dealing with a government that exists to serve its people, protect their liberties and ensure their happiness. Rather, these are the diabolical machinations of a make-works program carried out on an epic scale whose only purpose is to keep the powers-that-be permanently (and profitably) employed.

Case in point: For years now, the U.S. government has been creating what one intelligence insider referred to as a cyber-army capable of offensive attacks.

“Even as the U.S. government confronts rival powers over widespread Internet espionage, it has become the biggest buyer in a burgeoning gray market where hackers and security firms sell tools for breaking into computers. The strategy is spurring concern in the technology industry and intelligence community that Washington is in effect encouraging hacking and failing to disclose to software companies and customers the vulnerabilities exploited by the purchased hacks. That’s because U.S. intelligence and military agencies aren’t buying the tools primarily to fend off attacks. Rather, they are using the tools to infiltrate computer networks overseas, leaving behind spy programs and cyber-weapons that can disrupt data or damage systems.”

As part of this cyberweapons programs, government agencies such as the NSA have been stockpiling all kinds of nasty malware, viruses and hacking tools that can “steal financial account passwords, turn an iPhone into a listening device, or, in the case of Stuxnet, sabotage a nuclear facility.”

And now we learn that the NSA is responsible for the latest threat posed by the “WannaCry” or “Wanna Decryptor” malware worm which—as a result of hackers accessing the government’s arsenal—has hijacked more than 57,000 computers and crippled health care, communications infrastructure, logistics, and government entities in more than 70 countries already.

All the while the government was repeatedly warned about the dangers of using criminal tactics to wage its own cyberwars.

It was warned about the consequences of blowback should its cyberweapons get into the wrong hands.

The government chose to ignore the warnings.

That’s exactly how the 9/11 attacks unfolded.

First, the government helped to create the menace that was al-Qaida and then, when bin Laden had left the nation reeling in shock (despite countless warnings that fell on tone-deaf ears), it demanded—and was given—immense new powers in the form of the USA Patriot Act in order to fight the very danger it had created.

This has become the shadow government’s modus operandi regardless of which party controls the White House: the government creates a menace—knowing full well the ramifications such a danger might pose to the public—then without ever owning up to the part it played in unleashing that particular menace on an unsuspecting populace, it demands additional powers in order to protect “we the people” from the threat.

Yet the powers-that-be don’t really want us to feel safe.

They want us cowering and afraid and willing to relinquish every last one of our freedoms in exchange for their phantom promises of security.

As a result, it’s the American people who pay the price for the government’s insatiable greed and quest for power.

We’re the ones to suffer the blowback.

[Blowback: a term originating from within the American Intelligence community, denoting the unintended consequences, unwanted side-effects, or suffered repercussions of a covert operation that fall back on those responsible for the aforementioned operations.]

As historian Chalmers Johnson explains, “blowback is another way of saying that a nation reaps what it sows.”

Unfortunately, “we the people” are the ones who keep reaping what the government sows.

We’re the ones who suffer every time, directly and indirectly, from the blowback.

We’re made to pay trillions of dollars in blood money to a military industrial complex that kills without conscience. We’ve been saddled with a crumbling infrastructure, impoverished cities and a faltering economy while our tax dollars are squandered on lavish military installations and used to prop up foreign economies. We’ve been stripped of our freedoms. We’re treated like suspects and enemy combatants. We’re spied on by government agents: our communications read, our movements tracked, our faces mapped, our biometrics entered into a government database. We’re terrorized by militarized police who roam our communities and SWAT teams that break into our homes. We’re subjected to invasive patdowns in airports, roadside strip searches and cavity probes, forced blood draws.

This is how tyranny rises and freedom falls.

We can persuade ourselves that life is still good, that America is still beautiful, and that “we the people” are still free.

However . . . the moment you tune out the carefully constructed distractions—the year-round sports entertainment, the political theatrics, the military’s war cries, the president’s chest-thumping, and the techno-gadgets and social media that keep us oblivious to what’s really going on in the world around us—you quickly find that the only credible threat to our safety and national security is in fact the government itself.”

One cherry that should be on (or near the) top of this already devastating list should be the fact of the US Dollar as the lynchpin in the satanic/black magic economic construct being used to fund the domination and subjugation of the masses to an elite few who have been granted the power of producing “money” out of thin air. (For more on this, please see yesterday’s article: How Mommy and Daddy America sold their kids into slavery.)

So, if you really and truly love America and Americans, pray for conviction.

Pray for American idols to be torn down by supernaturally empowered people eager to love what the Lord loves and eager to hate what He hates.

Pray for American restoration through submission to Christ as King in practice…while there is yet time.