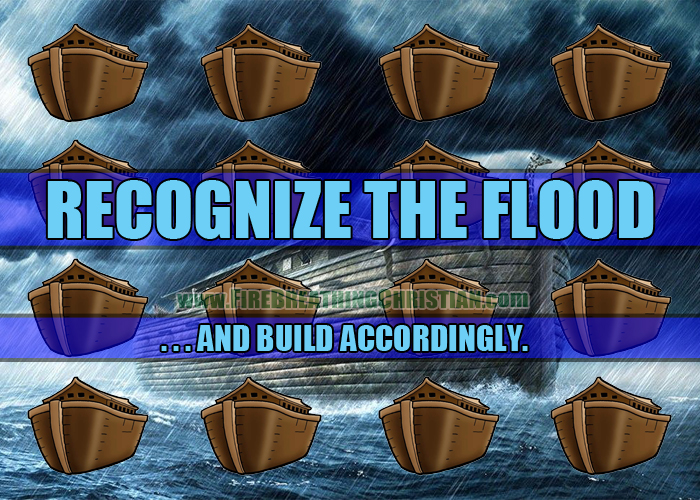 Rampant State dependence and the open worship of America itself, both promoted and enabled by wicked political leadership and apathetic church leadership.

A gender chaos movement that effortlessly sweeps and transforms the culture under the “shocked and horrified” watch of the aforementioned apathetic, impotent churches.

You wouldn’t think that things like this happening on a massive, culture-defining scale would leave much room for things like true peace, hope, joy, and even excitement in the lives of Christians in America.

But you’d be wrong.

The fact of such apparent judgment pouring down from God upon our prideful, unrepentant land is reason for great hope and even excitement when we recognize the incredible privilege that we’ve been given to take up the Gospel-fueled Great Commission and build lifeboats of Kingdom-minded civilization in such a time and in such a place as this.

For anyone who’s ever read a great adventure story or watched a top tier fantasy flick in which a hero faces and overcomes incredible odds in the most dire of circumstances, we should recognize that as Christians in 2017 America, we have been given the role of a lifetime in reality right here and now.

Before we can appreciate the magnitude of our position in this unfolding drama, we need to get a sense of what’s really going on in God’s creation of History. We need to shake off the bad eschatology (pessimistic end times view) that’s come to form much of the American Christian subculture into the pathetic, cowering tool of impotence that it’s become, and instead take a deep dive into the rich, beautiful truth of God’s plan for human history in light of His perfect Word.

To that end, please consider the following from an article that we first posted back in January:

“Contrary to popular opinions currently dominating American evangelicalism (and thereby leading the rest of American culture down the drain), it isn’t God’s people who are destined to be swept off the face of His earth.

That’s how He rolls.”

So that’s what’s going on here.

The flood has arrived.

The unrepentant are perishing – insisting on breaking themselves upon the unbreakable Law of God.

That’s where His people come in.

More specifically, people filled with His Spirit, guided by His Word, advancing His Kingdom by His grace and for His glory.

For more on the “overcoming bad eschatology” bit that we touched on earlier, and how important that is to embracing a proper view of the Great Commission, consider the following (also taken from our January post on this subject):

One of the things we’re hoping to encourage in more detail in the coming months through posts, books, our podcast, and our new video channel is this “building of arks” concept.

We want to explore, share, and learn together how to better build using the time, tools, and opportunities that God has so graciously given us.

We want to recognize where we’re at and build accordingly.

To that end, if you have specific requests or suggestions regarding subject matter to cover in future videos and podcasts, please email me at Scott@FireBreathingChristian.com.

There’s a whole lot to tackle. Technology, art, fantasy, law, politics, education, homemaking…it’s all on our radar. We want to be as productive and effective as possible as we learn and share more and more with you here in the weeks, months, and years to come.

So please send on your suggestions and pray that we might be blessed with increasing clarity as to where to focus and how to communicate the things that will most encourage Brothers and Sisters in Christ to seize the opportunities that He’s given us to advance His Kingdom right here and now…even as old empires fade and fall around us.