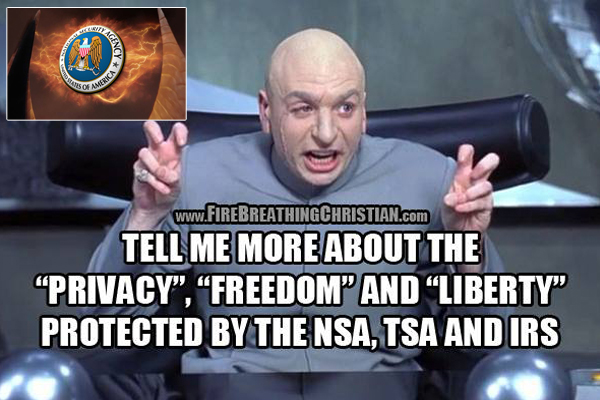 Even some fans of massive State power are beginning to grow weary of our increasingly Orwellian situation here in “the land of the free” and the home of the NSA.

In a rare flicker of good news on this front, an article posted by McClatchy yesterday revealed that at least some partial clarity may finally be coming to some of those living and working at the foot of Mt. Doom:

“The spying by our government on Americans cannot be tolerated, and it is being tolerated,” Rep. Ted Poe, a conservative Texas Republican, said in a telephone interview.

Poe blamed the National Security Agency for overreaching its authority, and said he would not be surprised if the agency’s employees were surveilling people like himself, a former criminal court judge.

“Nothing would surprise me about what the NSA does. Unfortunately, they cannot be trusted,” said Poe, who sits on the House Judiciary Committee that will weigh reauthorization.

Elsewhere on Capitol Hill, others also fretted about temptations for intelligence community employees to turn the surveillance apparatus on Americans.

“To folks in that world, it’s crack,” said an aide to another Republican congressman, who spoke without authorization of the aide’s boss and asked for anonymity. You’ve got to get the genie back in the box, and that’s really hard.”

Once you give Sauron an All Seeing Eye, he tends to want to keep it.

“Nothing would surprise me about what the NSA does…they cannot be trusted.”

And yet we are fleeced and stolen from as Tax Livestock to fuel and fund the very evil that strives to cement us into an Orwellian hellhole of total surveillance…for our own good, of course.

Either way, Sauron’s days are numbered.