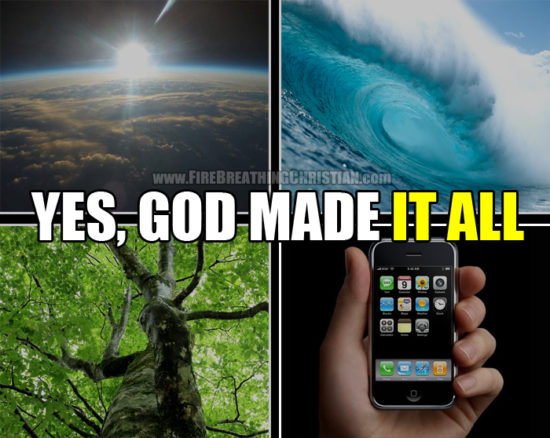 What do stars, trees, seas, and iPhones all have in common?

He made the iPhone just a surely as He made the sun and the oceans, however much we’re inclined to pretend otherwise.

One reason we tend to dismiss and avoid the notion that God really and truly is 100% responsible for bringing things like cool cars and the Internet into reality is that His doing so reveals us to be the mere tools that we are, in direct contrast to the independent creative forces and history-makers that we just love imagining ourselves to be.

In our fallen state as spiritually dead creatures, being a created, owned, and purposefully used tool doesn’t sit well with our pride and ego.

It doesn’t make our inner Snowflake very happy at all, and apart from God’s supernaturally saving and illuminating grace, being His property will always rub us the wrong way. Apart from salvation, we hate being owned by God. We hate being His tools.

We hate having no claim to the creation of anything in the ultimate sense.

We want credit for doing things on our own.

We want credit for iPhones, printing presses, and the Internet.

Oh sure, God can have credit for the Big Things and the beginning things from which all other things are made, but we want credit for those other things when we play a role in making them happen, as though we were something more than the wholly owned and purposefully used tools of God in His creative process.

We don’t like the fact that He uses us to perfectly to accomplish His purposes on His schedule for the benefit of His people, all by His grace and for His glory.

Soli Deo gloria is no joke.