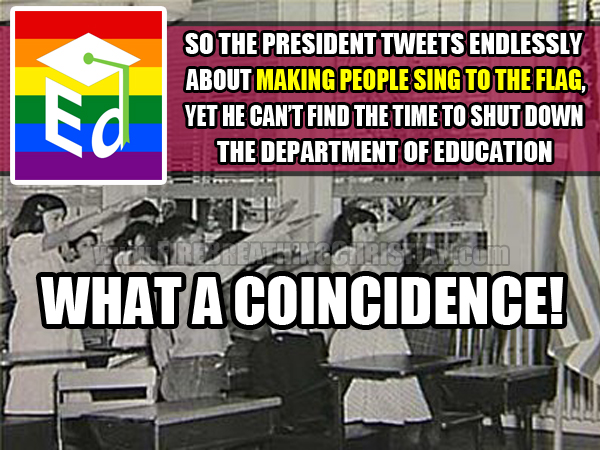 So the President tweets endlessly about making people sing to the flag, yet he can’t seem to find the time to do something real like shut down the Department of Education.

Nothing confirms this role more clearly than the Socialist-written, Socialism-promoting Pledge of Allegiance administered daily in most State-run schools for generations now here in “the land of the free” and the home of the NSA…which is a big part of why, if we’re honest, we really ought to put “land of the free” in quotes and replace things like “brave” with “NSA” as reminders of just how un-free we’ve become over 100+ years of steady, State-managed assault upon true liberty, freedom, privacy, and adulthood here in America.

So why are we getting a bajillion tweets about the flag, the national anthem, and patriotism from a President who won’t do anything real to actually get the government out of our lives, especially in the critical life- and culture-impacting realm of children’s education?

Because that’s what we want in America, and by “we”, I mean most professing conservatives and Christians in the land.

We want our Socialism and our Marxism.

And we want leaders who will tell us we can have it and that it is good; that we can make Socialism work by wrapping it in our favorite flag and singing about how awesome we are.

This is why God has given us a leader like Trump.

Trump is what we want.

Pride is what we want.

Repentance, on the other hand, is not what we want.

Because we love America.

And God has given us over to this idol…which is why most American “conservative Christians” reading or hearing thoughts like these will be infinitely more angry that this article has been written than they will be concerned about whether or not it is true.