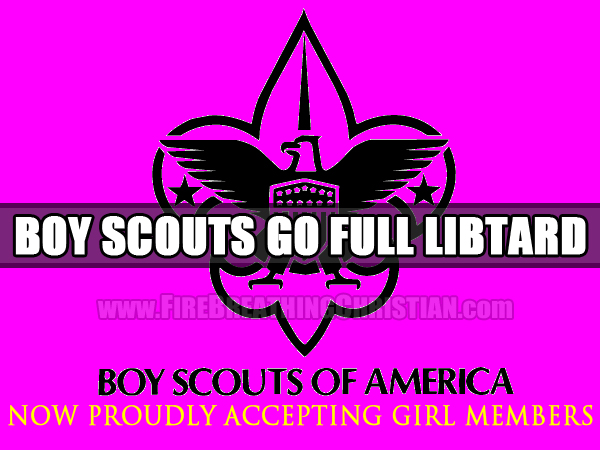 What does an organization called The Boy Scouts become when it starts admitting girls as members?

Besides incredibly silly and dumb, I mean.

We will soon be finding out since, as the GayP reported in an article adoringly titled In historic change, Boy Scouts to let girls in some programs, we are informed that the “Boy” part of Boy Scouts is pretty much meaningless.

Here’s how the GayP presented this latest triumph of Progressive insanity and chaos in American culture:

“In a historic change, the Boy Scouts are announcing plans to admit girls into the Cub Scouts starting next year and to establish a new program for older girls using the same curriculum as the Boy Scouts.

Under the plan announced Wednesday, Cub Scout dens — the smallest unit — will be single-gender, either all-boys or all-girls. The larger Cub Scout packs will have the option to welcome both genders if they choose.

The program for older girls is expected to start in 2019 and will enable girls to earn the coveted rank of Eagle Scout.

Boy Scout leaders say the change is needed to provide more options for parents. The Girl Scouts organization has criticized the initiative, saying it strains the century-old bond between the two groups.”

I mean how silly of the Girl Scouts organization to push back that way.

If they were paying any attention at all to pretty much anything going on in the culture around them over the past 50 years or so, these embarrassingly confused Girl Scout people would have long ago realized that “straining bonds” is exactly the idea. It’s what’s hip. It’s what’s cool. It’s the goal – especially when it comes to male/female gender distinctions and the relationships built around such things (see: families and civilization).

Straining – and ultimately destroying – the bonds that hold even the most basic components of civilization together is the whole point.

‘Cause just like everything else touched by the suicidally imbecilic postmodern worldview driving most things in America these days, including the Boy Scouts, they’re all going away. Every word with any power or meaning will be stripped entirely and redefined relentlessly until it is undefined to the point of practical meaningless.

Just like the “Boy” in Boy Scouts of America.