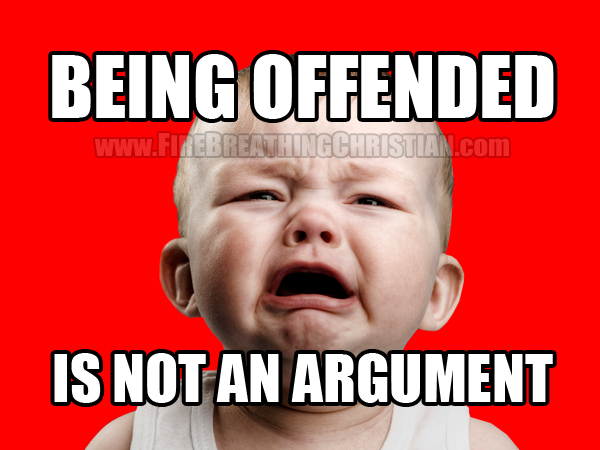 We can’t process an argument.

And we don’t want to.

Which means that we usually can’t make an actual argument of our own.

But we don’t want to do that either, so it’s all good.

Things like truth, logic, facts, and objective reality are so yesterday. In 2017 America, thanks in no small part to generations of immersion in State-managed education and Corporate-managed pop culture, we’re all about emotions…and that goes for people on the Right every bit as much as it does for those on the Left. (For more on this, please read Why are “conservatives” using the blood of soldiers as a shield against criticism and a weapon against dissent?)

We want to avoid critical thought by diving (and dragging others) deeper and deeper into our precious feelings.

Instead of critically examining and factually refuting an opposing argument, we avoid all o’ that hard work by yammering on about how “hurt” we feel that certain questions are even asked.

Instead of considering the truthfulness of facts or questions that make us squirm on first contact, we avoid dealing with them in any meaningful way by citing how “offended” they make us feel.

Instead of actually answering clear, pointed questions that make us uncomfortable, we deflect and evade by painting them as too “disrespectful” to warrant a real answer.

And if anyone calls us on it…well…they’re just a big, bad, hateful, disrespectful, jerkfaced meanie! They should take their stupid facts and objectively verifiable truths and run away in shame, never to be seen or heard from again…until they repent of having ever thought or shared those hard facts and truths, of course.

As we’re learning the hard and ugly way these days, Precious Snowflake Syndrome isn’t an affliction exclusive to the Left. The Great American National Anthem Crisis of 2017 has demonstrated quite clearly that self-described conservatives (many of whom also claim to be Christians) are every bit as into shouting down or shaming uncomfortable or challenging facts into silence through the use of emotion-drenched whining and personal attacks in lieu of actually dealing with the factual components of the “offensive” or “disrespectful” statements that have ’em in a tizzy.

Please note that there’s nothing wrong with including some zing or spice in the form of a pejorative while making a case (or critiquing one). Its the exclusivity of name-calling and emotion-slinging while dutifully avoiding tackling hard truths or statements head-on that’s the problem.

The truth can, and will, hurt.

It can, and will, offend.

This is typically how the Truth operates…right before it sets us free.

Feeling hurt, disrespected, or offended is not proof that the thing – whatever it was – that inspired your emotional response is in any way bad, wrong, or destructive. The question or fact that offended you or made you feel disrespected may well be completely true, right, good, and essential to your own ultimate good and happiness. (See: the Gospel.)

When we consider the present American obsession with feelings over truth in light of the Gospel, and the inherently confrontational and offensive nature of that Gospel, we begin to get a glimpse of the horror that befalls a people who are given over to their emotions in this way.

It’s no coincidence that the many popular counterfeit gospels masquerading as Christianity (and claiming millions of “converts”) in America today are counterfeits that remove the offensiveness of the true Gospel by reducing the Lordship of Christ either to an optional or very limited aspect of the Christian life.

This is why the true Gospel and Great Commission are so offensive to most professing Christians in America.

Instead we prefer to feel our way around the many confrontational truths and commands made by the actual Jesus, avoiding them all in favor of the emotion-driven, non-judgmental, non-thinking phony Jesus that we’ve made up in our increasingly irrational little minds.

This is how professing Christians have led America to become the pathetic, incoherent, maturity-avoiding, adulthood-hating culture that it is today.

For every person that will take the time to express what they think about an issue, there are 100 or more who will gush on and on at the drop of a hat about how they feel about the same issue, all while imagining that their feelings actually constitute an argument or position every bit as legit as arguments based on things like facts and objectively verifiable truths.

For those who claim to be conservative and/or Christian and are “offended” or “hurt” by the mere presence of questions like: “Is it ever okay to refuse to salute (or sing or pledge) to the U.S. flag?” or “Would the Founding Fathers repeat or reject The Pledge of Allegiance?“, I respectfully request that you thoughtfully consider a few things:

1. Have you bothered to actually consider and answer these questions? If so, what’s your answer? If not, why not?

2. Do you realize that by avoiding dealing with such questions as a thinking adult rather than as an emotion-driven little girl, you are not modeling a genuine love for true liberty, freedom, or even America itself? You are instead modeling a false love (AKA: hate) that will not do the hard things necessary to preserve or protect true freedom, liberty, or any other good thing.

3. Being offended is not an argument.

Thank you for your time and interest in these important things. The fate of American culture literally hinges on our desire and ability to pursue, promote, and apply Truth, no matter how temporarily painful or offensive it may be at any given moment.