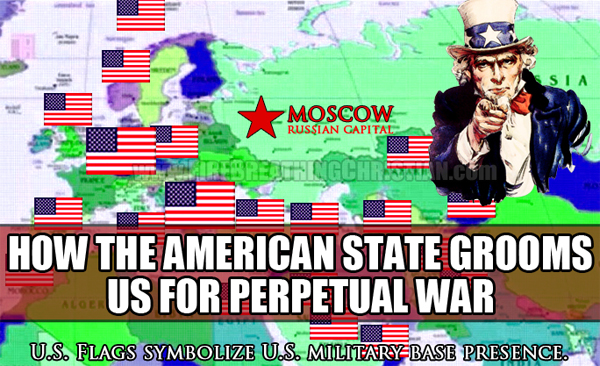 Ask the average American public school product to find North Korea, Iran, Syria, or any of the other nations atop America’s hit list of the moment on a globe or a map, and you’re likely to discover that the same State-programmed children and adults most likely to cheer endless American military intervention around the globe are also quite ignorant as to exactly what a globe is.

The same State-managed “education” system that has moved America away from the strict “avoid foreign entanglements” attitude that propelled the nation to the place of great freedom and prosperity that it enjoyed before World War 1 is the same “educational” system that has successfully programmed generations of Americans to worship and obey the American State in spite of any and all objective historical, economic, or strategic facts that might lead them in another direction.

This is why Americans have been deliberately programmed with increasingly weak, watery, and downright destructive counterfeits of history, economics, and civics. Put another way: Common Core is not “the problem”. It’s just another predictable step down a path that we started down looooooong ago when we decided that the American State should mold the minds of the young.

So now here we are in 2017, and the Russia Card is being played with increasing regularity and typical success.

Forces across the political spectrum, from Neo-Con, flag-waving lunatics on the Right to Hillary and her goons on the Left, have one giant, alarming thing in common: They all seem to want war with Russia.

We’ve written and warned about this again and again. For those who aren’t up to speed, please check out the following articles:

Turkey is our friend, Russia is our enemy, and we’ve always been at war with Eastasia

In this context, and as pressures mount on America in ways likely to soon bring about even more dramatic changes than we’ve witnessed in recent years, it seems like a good time to share a helpful video posted recently at Mike Maloney’s YouTube channel.

The video does an excellent job of chronicling the truly ridiculous situation that the American State has been pushing onto Russia’s doorstep for some time now. You can view the video by clicking on this link or on the embedded player below:

Please consider these things the next time you’re prompted to pledge personal allegiance to the indivisible power of the American State above you – something the Founding Fathers would never have done.

Please stop promoting and start opposing the manipulation of individuals and masses by endless appeals to feelings based on lies.

Please start acting like a truly free – and freedom loving – adult…while that sort of thing is still allowed in the “land of the free” and the home of the NSA.