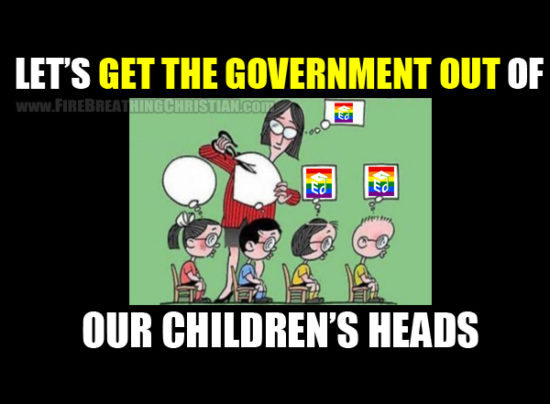 Let’s be clear about a few key facts:

2. Vouchers are the forced redistribution of resources in accordance with basic Marxist/Socialist principles.

3. Vouchers are funded through the confiscation (theft) of private property by using the coercive power of the state.

I understand that there are many good, God-fearing, conservatively inclined people who have become huge fans of things like school vouchers, and I appreciate that most (if not all) of those folks have formed their opinions on education after having been immersed for practically their entire lives in the State-controlled “education” system that has dominated America for over 100 years now.

May of these people mean well.

Yet, as the saying goes, the road to hell is paved with good intentions…and we’ve been on that road for a good long while now.

We’ve been trying to tweak, nudge, and adjust Socialism to “make it work” in America for generations now, often at the behest of self-described (yet State-programmed) conservatives.

It’s time to get the State out of the mind-sculpting business.

It’s time to acknowledge rather than avoid uncomfortable facts like:

2. Vouchers are the forced redistribution of resources in accordance with basic Marxist/Socialist principles.

3. Vouchers are funded through the confiscation (theft) of private property by using the coercive power of the state.

We can’t keep propping up the rank Marxism of public schools and then credibly proclaim “shock” and “dismay” at how each successive generation of public school product is more Marxist than the last.

We have to own up to our failure to take education seriously enough to protect it from the State.

To that end, I’d like to share a recently posted article entitled Milton Friedman & Conservatives Are Wrong In Education, which includes a firm (and much needed) correction of “conservatives” in America who are even now still trying to prop up America’s long-embraced Marxist foundations for culture and civilization:

“Once upon a time, some conservatives used to call for the abolition of the U.S. Department of Education. Lamentably, conservatives today celebrate when a “free-market advocate” like multimillionaire Betsy DeVos is appointed U.S. Secretary of Education, and they get terribly excited when she speaks at conservative conferences.

Meanwhile, even while conservatives continue to pronounce their allegiance to their favorite mantra — “free enterprise, private property, limited government” — they continue to embrace not only public schooling itself but also their favorite public-schooling fix-it program, school vouchers.

Over the years, conservatives have developed various labels for their voucher program: a “free-market approach to education,” “free enterprise in education,” or “school choice.” They have chosen those labels to make themselves and their supporters feel good about supporting vouchers.

But the labeling has always been false and fraudulent. Vouchers are nothing more than a socialist program, no different in principle from public schooling itself.

A voucher system entails the government taxing people and then using the money to provide vouchers to people, which they can then redeem at government-approved private schools.

Does that sound like a system that is free from government control or interference? In reality, it’s no different in principle from food stamps, farm subsidies, Social Security, or any other welfare-state program. The government is using force to take money from Peter and giving it to Paul. That’s not “free enterprise.” That’s the opposite of free enterprise.

Conservatives say that their voucher system is based on “choice” because the voucher provides recipients with “choices.” But doesn’t the same principle apply to recipients of food stamps, farm subsidies, Social Security, and other socialist programs? Sure, the recipient of the loot has more choices because he has more money at his disposal. But let’s not forget that the person from whom the money was forcibly taken has been deprived of choices. After all, after a robber commits his dirty deed, he too has more choices with the money he has acquired. His victim, on the other hand, has been deprived of choices.

In FFF’s first year of operation, 1990, I wrote an article entitled “Letting Go of Socialism,” in which I pointed out that school vouchers were just another socialist scheme, one that was intended to make public schooling work more efficiently.

Imagine my surprise to receive a critique from none other than Milton Friedman, the Nobel Prize-winning economist who is the father of the school voucher program. Friedman leveled his critique in a speech he delivered that was entitled “Say No to Intolerance,” in which he took to task such libertarian stalwarts as Ludwig von Mises and Ayn Rand for adhering to principle.

Interesting enough, Friedman’s speech was recently reprinted in an issue of the Hoover Digest, a premier conservative publication. You can read it here.

Friedman’s critique of my article was nice enough. First pointing out that FFF was doing “good work and making an impact,” he addressed my criticism of vouchers:

But am I a statist, as I have been labeled by a number of libertarians, because some thirty years ago I suggested the use of educational vouchers as a way of easing the transition? Is that, and I quote Hornberger again, “simply a futile attempt to make socialism work more efficiently”? I don’t believe it. I don’t believe that you can simply say what the ideal is. This is what I mean by the utopian strand in libertarianism. You can-not simply describe the utopian solution, and leave it to somebody else how we get from here to there. That’s not only a practical problem. It’s a problem of the responsibilities that we have.

With all due respect to a Nobel Prize winner and a true gentleman, Milton Friedman was wrong on education then, and conservatives who continue to support vouchers are wrong today.

That’s not what conservatives say today. They justify vouchers by saying that they will improve, not destroy, the public-schooling system. I can’t help but wonder what Friedman would say about that if he were still alive, given that his support of vouchers was based on the notion that it would serve as a way to get rid of public schooling. Would he still support vouchers if he knew that they would save public schooling and make it more efficient?

Why did conservatives end up rejecting Friedman’s justification? They came to the realization that some people would be less likely to support vouchers if they were told that their real purpose was to destroy public schooling. Therefore, to get more people to support vouchers, conservatives shifted Friedman’s justification to the exact opposite of what Friedman was saying. Conservatives began telling people that vouchers, by providing “competition,” would improve the public-schooling system. In fact, voucher proponents today, when pressed, will openly tell people that they are opposed to abolishing public schooling but only want to make it better by providing people with the means (vouchers) to leave the public-schooling system.

Almost 30 years after Friedman leveled his critique at me, there is not one instance of where his system of school vouchers have served as a “transition” to educational liberty. Time has confirmed the point I pointed out almost three decades ago — that school vouchers, no matter how they are labeled, are nothing more than a socialistic program designed to make socialism (i.e., public schooling) work more efficiently.

Friedman and conservatives have been proven wrong on education. There is only one solution to the educational morass in which Americans find themselves: Separate school and state, just as our ancestors separated church and state. Repeal all school compulsory-attendance laws and school taxes and sell off the school buildings. End all government involvement in education, including licensing of schools.

You’d be hard pressed to find a concept more terrifying to even most so-called “conservatives” here in “the land of the free” and the home of the NSA.

We can’t expect Americans to handle that kind of freedom – actual, adult-level freedom – in a responsible manner!

We have to protect them from that freedom!

For their own good, of course!

Just try to find an even semi-prominent national or even state level “conservative Republican” who simply, calmly, and clearly advocates getting the State out of the business of shaping the minds of the young.

Just try to find a national or state level “conservative Republican” who actually wants true freedom in the realm of education.

While such “conservatives” don’t seem to actually exist in American politics these days, we are loaded at the national and state levels with Republicans who will openly decry and warn against such freedom in education. The thought of getting the State completely out of the mind-sculpting business is utterly inconceivable to them.

Because that’s how the State has taught them to think.

That’s what the State has programmed them to be.

Until we face these hard facts head on and repent of false approaches to both conservatism and education, we will never even have a chance of experiencing true liberty and true freedom here in “the land of the free” and the home of the NSA.

So let’s stop pretending that Marxism can work if we just wrap it thoroughly enough in an American flag.

Let’s stop enabling the very systems and tools that are being used to fundamentally transform everything in the culture, including basic concepts of freedom, liberty, family, and even gender.

It’s time to take a stand.

It’s time to separate the State from our children’s education…even when that State and its “conservative” enablers try to bribe us into compliance by offering us some of the money they’ve stolen from us.