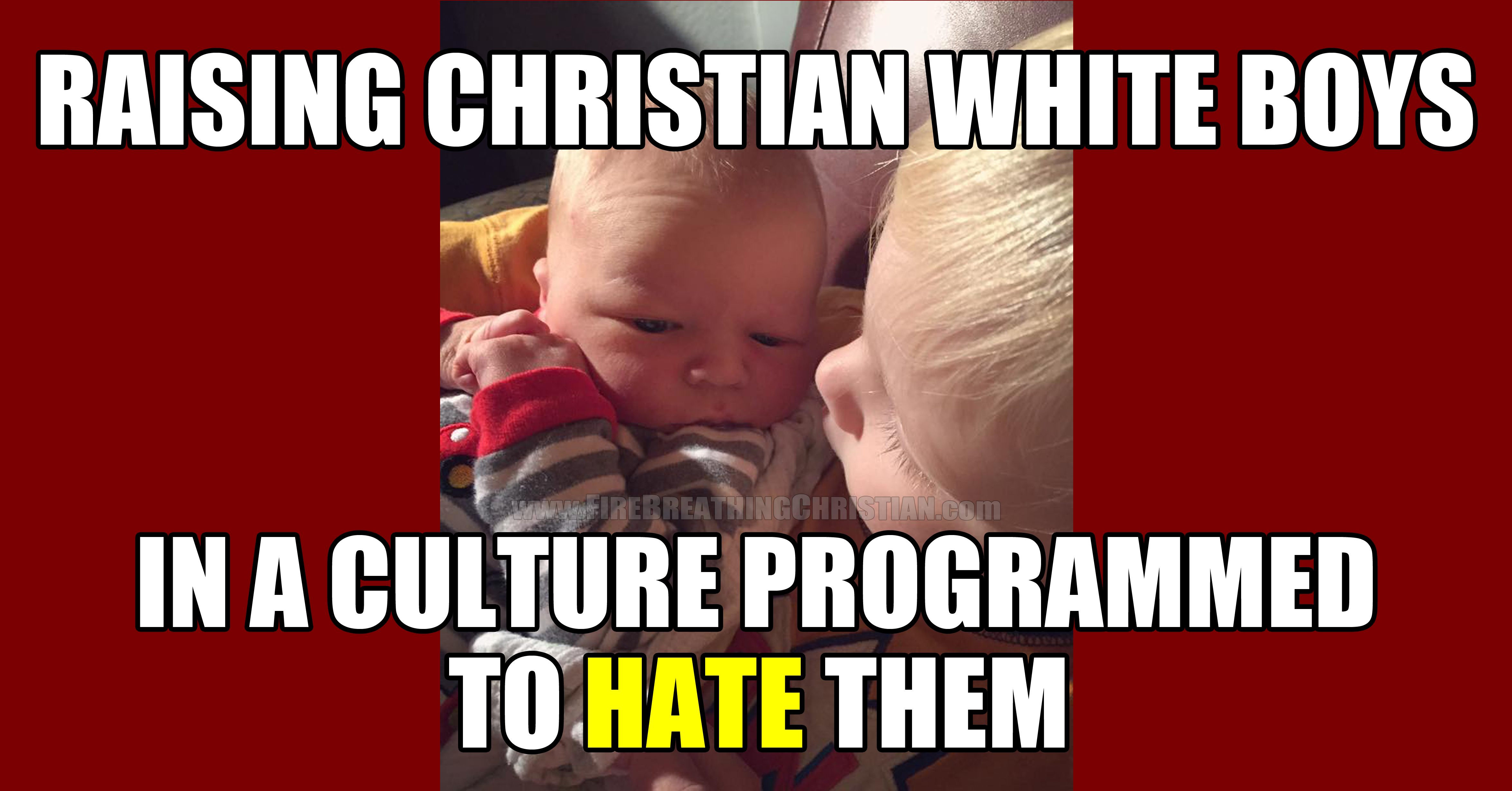 Oooooohhhhh…did you see that title?!

Right there in the middle!

Can you believe it?!

I mean, in 2017 America – the self-described “land of the free and home of the brave” – to even use the word “white” like that is incredibly risky. It’s borderline taboo…minus the borderline.

I mean what kind of racist, sexist, homophopic, islamophobic, transphopic, global warming denying white devil do you have to be in America these days to dare to publically acknowledge that your children are, um, white, and that said whiteness is totally cool and good?

Yes, my children are white.

Glow in the dark white.

Now on to more important things…

As in: If you’re a white boy or man in America, it is 100% A-Okay (and virtuous even) for you to be openly discriminated against through any number of “special considerations” given to everyone who is not like you.

Every other gender (of which one is real) gets preferential treatment.

Every other ethnicity (of which all are a part of one race – the human race) get’s preferential treatment.

Every other religious worldview gets preferential treatment.

And while these are all sad, pathetic, and destructive realities in serious need of confrontation and correction, the primary response that I hope to instill in the white boys God has blessed me to raise is this:

Put another way: Man up, buttercup! Rome wasn’t conquered in a day.

By this I mean yes, American culture is now a ruinous shadow civilization drowning in a cesspool of satanic worldviews like materialism and Cultural Marxism that have been vigorously promoted, nurtured and brought to fruition over generations of State-managed “education” through public schools. And yes, now it is the norm in civil government and Corporate America to openly and aggressively discriminate against white males, particularly those who would dare to speak publicly in a manner that confronts the culture with the whole Gospel of Christ in accordance with His Great Commission.

(Just try to get a quality corporate job in America in the age of the Internet when you’ve communicated with clarity online on subjects like the LGBTQ agenda. Most HR investigations revealing anything like FireBreathingChristian.com content will not lead anywhere near a job offer to the author of such material.)

And yeah, even most professing Christians in the land have bought into the identity politics of Cultural Marxism these days, so that by simply being white it is assumed that one is worthy of being discriminated against.

Yet as disgusting as all of this is, I cannot help but brush it off at a fundamental level.

Yeah, America is a dying culture loaded with self-serving, State-programmed snowflakes who are obsessed with feeling, incapable of (and uninterested in) thinking, and quite comfortable with the anti-Christian, discrimination-justifying Cultural Marxism that they’ve been immersed in for their entire lives through State-run “education” and Corporate-controlled pop culture.

But – and this is a classic “big but” (and no, that’s not a fat joke) – even as all of this grotesque, pompous, posturing, emotion-driven snowflakeyness covers the land, God is raising up for His people amazing opportunities and amazing technologies that are enabling them, in ways previously unimaginable, to literally bypass, overcome, and eventually dominate/crush the very systems that have been set up to dominate and crush Christian white males (among others) right here and now.

So do I want my boys to whine or complain about the rank discrimination and open hate they will be targeted with as they grow up in a public-school programmed land of Cultural Marxism?

They can and should recognize what’s going on and speak openly about it, to be sure, but whine or complain?

God has given us even these things – even the racists and the phony Christians and the Marxists and the public school system programmed culture – so that we might be pushed, challenged, and honed into ever sharper weapons to be used to advance His Kingdom (see: Romans 8:28-31).

Thank God for the Corporate/State-managed systems all around us having been so clearly revealed as the anti-Christian, racist, sexist things that they are.

To think that by God’s grace I’ve been given the opportunity to raise Christian white boys like Wolfgang and Sebastian (pictured above, with Wolfie holding Sebastian) in such a time as this – a time of incalculable opportunity – gives me a chill. The good kind. In a big way.

Lord willing, in the coming years, dragons will be slain.

Idols will be confronted, toppled, and crushed.

Statism, racism, sexism, Marxism, and every other pride- and idolatry-fueled ism will be confronted and corrected with boldness and success.

Lord willing, my boys will not just see that happen, but help to make it happen, all by God’s grace and all for His glory.

That’s my answer to the culture that hates us.