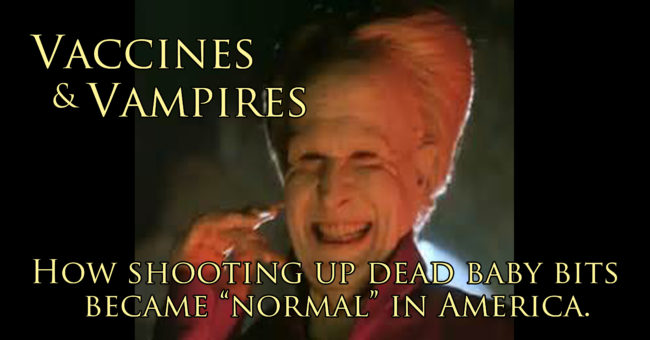 While there are many reasons to be anything from skeptical to outraged over the manner in which vaccines have proliferated in America, one of the more under-reported problems with many popular vaccines products pumped into the bloodstreams of Americans by the millions each year is the fact that they’ve been crafted using cells harvested from murdered babies.

But the tide is turning.

Where once centralized power in the hands of massive corporations gave them near total control over the flow of information, through which culture was easily directed along preferred State- and Corporate-serving narratives, now there are literally millions of alternative sources available to people seeking truth.

In response to this radical shift in power, even the cracked pillars of dying dinosaur mainstream media are being forced to deal with issues such as the existence of murdered baby bits in vaccines.

ABC News offered up the following attempt to defuse or dismiss the issue in 2015, entitled What Aborted Fetuses Have To Do With Vaccines.

“A small but growing number of parents who object to vaccinating their children on religious grounds say they do so because many common vaccines are the product of cells that once belonged to aborted fetuses.

There is a grain of truth to this statement. But even religious leaders, including a future pope, have said that shouldn’t deter parents from vaccinating their children.”

This sort of appeal to authority rather than dealing honestly with facts in a straightforward manner is a common theme in State- and Corporate-sponsored propaganda…which is precisely why those media outlets are destined for the dustbin of history as the age of decentralization continues to dawn upon us.

In the meantime, the article continues:

“Some childhood vaccines, including the one against rubella — which is part of the MMR vaccine given to millions of children worldwide for measles, mumps and rubella — is cultured in “WI-38 human diploid lung fibroblasts,” according to the U.S. Food and Drug Administration’s fact sheet on the vaccine’s ingredients.”

Get that: “the U.S. Food and Drug Administration’s fact sheet on the vaccine’s ingredients.”

We really need to pause here to note that we’re talking about the MMR vaccine, a wildly popular vaccine that, as the article states, is routinely given to millions of children.

This vaccine – the MMR – is partially cultured in cells originally obtained from a murdered baby, as the article admits clearly in the next sentence (while swapping out the “murdered baby” lingo for more comfortable, Orwellian, and politically incorrect terminology available in “electively aborted fetus”).

“Merck, the vaccine’s manufacturer, acknowledged that those cells were originally obtained from an electively aborted fetus. They were used to start a cell line, which is a cell multiplied over and over again to produce cells that are of a consistent genetic makeup. The WI-38 cell line is used as a culture to grow live viruses that are used in vaccines

“Merck, as well as other vaccine manufacturers, uses two well-established human cell lines to grow the virus for selected vaccines,” Merck said in a statement to ABC News. “The FDA has approved the use of these cell lines for the production of these Merck vaccines.”

Other common vaccines, including those for chicken pox, hepatitis and rabies, are also propagated in cells originating from legally aborted human fetuses, according to the FDA.”

AKA: Murdered baby boys and girls.

AKA: Murdered baby boys and girls whose body parts have been used to make our chicken pox, hepatitis, and rabies vaccines.

Are you getting this?

Are we getting this?

Do we even want to?

Before allowing ourselves to be emoted, nudged, or manipulated away from these facts, we should force ourselves to ask and answer the simple question: Is it true?

Is it true that murdered babies have been used to make these vaccines?

It’s either true or it isn’t.

In this case the answer is that yes, it is true.

Murdered baby parts are used to make our vaccines.

Even according to this ABC article, painstakingly written to twist and replace truth and clarity with obfuscation, justification, and defense of the status quo at every turn – even this article admits, however begrudgingly, to the basic reality that these vaccines have been made using cells taken from murdered babies.

“These abortions, which occurred decades ago, were not undertaken with the intent of producing vaccines,” said a spokeswoman for the U.S. Centers Disease Control and Prevention.

Oh well, then it’s all good.

As long as the murdered babies weren’t murdered with the intent of harvesting their bodies to make vaccines, then everything’s cool, right?

According to ABC, yeah, that’s right.

The same position is taken by most professing Christians here in “the land of the free” and the home of the NSA, it should be noted…even though most of the same professing Christians routinely express shock, horror, and outrage over things like the Planned Parenthood practice of harvesting dead baby body parts for profit, with said profit coming by way of people and organizations seeking out (and paying handsomely for) harvested baby cells to use in endeavors like…vaccine research and production.

The article goes on to explain how the minuscule amount of cells related to murdered babies in our vaccines doesn’t really matter at all:

The original cells were obtained more than 50 years ago and have been maintained under strict federal guidelines by the American Type Culture Collection, according to Merck.

“These cell lines are now more than three generations removed from their origin, and we have not used any new tissue to produce these vaccines,” the company added in its statement.

To say that the vaccines contain a significant amount of human fetal tissue, as some objectors to the vaccines claim, is misleading, stressed Dr. Paul Offit, the director of the vaccine education center at the Children’s Hospital of Philadelphia.

“There are perhaps nanograms of DNA fragments still found in the vaccine, perhaps billionths of a gram,” he said. “You would find as much if you analyzed the fruits and vegetables you eat.”

And to remove human fibroblast cells entirely from vaccines is out of the question, Offit explained, noting they are necessary because human viruses don’t grow well in animal cells.”

So, after all the qualifiers and dismissals of any legitimate reason for concern, the following important admission of fact is smuggled in: The harvested-from-murdered-baby DNA is necessary to these vaccines.

Harvested-from-murdered-baby DNA is an essential ingredient in the production of these vaccines.

That’s the truth of the matter.