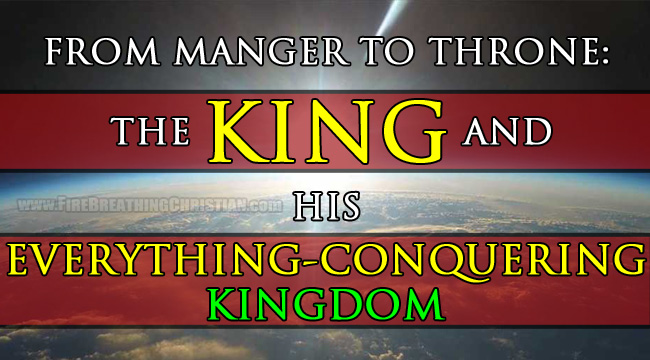 Which is why celebrations of Christ’s birth that define this time of year are such an easy sell for many who openly despise the notion of a King of kings ruling over them (including many who claim to be Christian).

It’s easy to fawn over a baby.

It’s easy to talk about things like peace, love, and good will when we get to define peace, love, good will, and everything else by our own self-referential, emotion-driven, ever-shifting standards.

They have no trouble claiming to love babies, at least as they define love, but they hate the notion of a King ruling over them.

They hate His Kingdom.

They hate His Gospel.

Because the King, His Kingdom, and the Gospel-fueled Great Commission through which He expands that Kingdom are all things that proclaim and advance the sovereignty of God over man in each and every realm of life and creation.

It is the creation and property of God. It’s proper definition, pursuit, and application is determined by His Nature.

The same goes for economics.

Business, art, science, history, language, and everything else.

They’re all His – His creations and His property.

And He is even now in the process of purifying them all from any hint or residue of sin born through our corrupting abuse and perversion of His magnificent creations of education, economics, art, and science.

By His grace, for His glory, on His schedule, for His purposes, and to the eternal benefit of His people, He is at this very moment in the process of taking them all back.

Art, politics, law, economics…they’re all being purified and reclaimed by the power of His work on the cross (see: Colossians 1:15-20).

Every business thought, every legal thought, and every scientific thought is being taken captive to Him through His Spirit-filled, Grace-fueled people (see: 2 Corinthians 10:5).

By His grace, His Spirit-filled people are both praying and acting in a manner to see His will increasingly done on earth as it is in Heaven.

His Kingdom is even now advancing over the proud, dead (and dying) ruins of countless cultures and civilizations that simply would not have Him to rule over them. (For more on this, please read The Kingdom of God vs. The Collapsing Empire of America.)

These are the purposes of the King found in a manger some 2,000 years ago.

This is why He is hated, rejected, and despised by so many – including many who pretend to adore Him and claim His name in worship.

His rightful claim and inevitable lordship over everything and everyone in His creation is the ultimate joy to His true people…and the ultimate terror to all who reject Him.

These are some of the essential beauties of the babe in a manger that we’re prone to dismiss or skip around at this time of year.

These are the consequences of His most high and beautiful Nature that we often avoid when we try to “reach people for Jesus” in a manner far more pagan than Christian – a manner far more in line with a Mr. Potato Jesus business model approach to dead religion than it is a faithful proclamation of the Gospel command to repent, believed, and be saved.

May God give us the desire to know Him as He actually is, rather than How we might wish He was in our self-serving, King-dismissing, Kingdom-hating hearts.

May He give us the conviction, repentance, and restoration necessary to appreciate His incarnation in all of its supremely majestic splendor at this time of year and every other so that we might, by His grace, become advocates for His Kingdom’s victory in every realm of His creation…just as the King has commanded (see: Matthew 28:18-20).