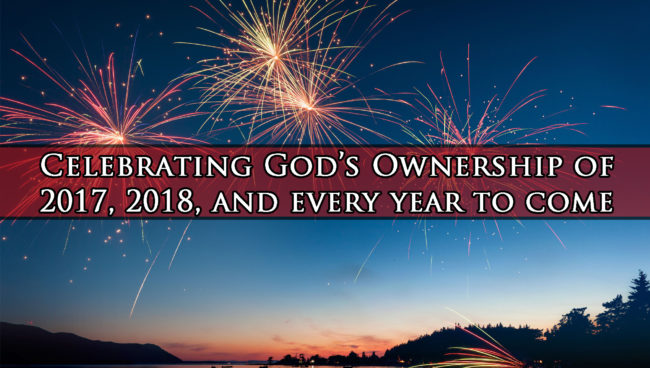 We’re blessed to live in amazing times – times that seem to get more interesting and more intense with each passing month. While many professing Christians would agree with this general sentiment, most of ’em would also tend to spin it in a negative direction.

The temptation is great to zone in on things like the ongoing advance of the LGBTQRSTD movement, the continuing mass-murder of millions of babies in the name of “choice” in America, or the utter unrepentance of millions of proud, America-worshipping so-called “conservatives” who are hell-bent on preserving Socialist constructs like public schools, social security, and the massive welfare/warfare state.

But, believe it or not, and quite in spite of even these certifiably terrible things, much ground was gained in 2017.

But before getting into those Big Picture positives, it’s important to note and savor the “little things” of beauty that God has stitched into the part of history that we now label as 2017.

For our growing family, we enjoyed a year of relative peace and progress in our happy little home in Middle Tennessee. Of the many “little things” of beauty that we’ve savored this year, most have centered on our children (Rosie, 4; Wolfgang, 2; and Sebastian, 1).

Watching them grow and learn and struggle and blossom has been incredible, as you might imagine. Hearing them ask and witnessing them ponder significant questions for the first time has been a joy. Helping them to see God and His Word as a starting point for rightly understanding everything from the Big Things (like life and death) to the little things (like super-heroes, dress shoes, and sparkly hair bows) has been an adventure like nothing we could have even imagined in any kind of detail prior to its coming our way.

2017 marked the second year of Rosie referring to Frosty the Snowman as “Frosting the Snowman” and the first in which Wolfie was very verbal at all (while he was a slow starter on this front, he’s definitely made up for lost time and is becoming quite the conversation partner for our Rosebud).

Then there’s Sebastian, who has just this week mastered the art of giving “the stink eye” on cue, after which he always smiles and applauds. On a more encouraging note, he’s also become the most cuddly baby we’ve known and has, for many months now, been a master hugger, going so far as to emphatically pat his targeted hug recipient on the back repeatedly during the embrace.

These are things to savor.

These are things that shaped and will forever define 2017 in our little part of God’s creation, and when I stop to think about how similar splendor of the “small” sort has been sprinkled around much of the globe for various people to enjoy in various ways, I cannot help but be awe-stricken by what God is doing and has already done in His creation of History.

And the best is yet to come.

So as we get properly jazzed about the great Big Thing positive changes that will continue to flow into God’s creation in 2018, let’s not lose sight of the mountain of “lesser things” that He has placed on our paths and in our lives.

As incredible technologies continue to force radical decentralization on a grand scale, bringing with them opportunity, challenge, and chances at true liberty and freedom the likes of which have been unthinkable for 99% of human history, let’s not lose sight of the value in the mountains of “little things” that shape life on the ground in families and homes across God’s green earth on any given day.

None are really “small” at all.

His Kingdom is advancing, right here and right now.

So let’s savor the Big Things, the “little things” and everything in-between, using each and every one of them to fan the flames of love-fueled obedience that define His true people so that we might, by His grace, continue to advance His name and apply His lordship in every area of life and every realm of His creation.