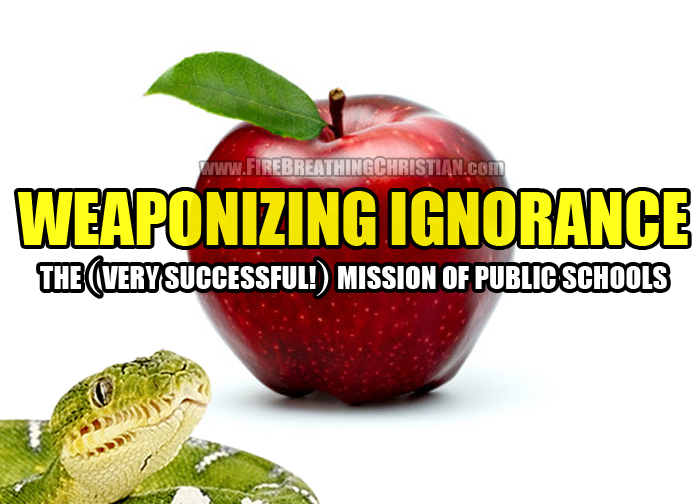 This is why the culture is dying around us.

This is why the feeble attempts to somehow tweak or save various godless systems can never and will never accomplish the goals that are routinely promoted by well-funded, often well-meaning “conservative” political groups.

They cannot be saved.

They cannot be tweaked or modified into acceptability.

Public schools are no more salvageable than strip clubs. Any legitimate reforming of either institution will, as it runs its course, fundamentally transform the institution in question to the point that it ceases to exist as the thing that it once was.

God is either God, or He is not.

Jesus is either Lord, or He is not.

These are fundamental truths that public schools, by definition, can and will never accommodate.

These are fundamental truths that public schools, by design, can and will always oppose.

So when public schools, by design, continue year after year, decade after decade, and generation after generation in the production of increasingly ignorant, increasingly State-dependent, and increasingly anti-Christian disciples of the State, those disciples are then used by the system that disciple them for its benefit.

Their staggering ignorance of basic truth is weaponized.

Their incredible pride is weaponized.

Their increasingly overt anti-Christian worldview is weaponized. (See also: Disciples of the State: 10 ways that State-run “education” is (purposefully) killing us.)

After generations of State-managed programming, with one crop of public school product piling on top of the last, we are now seeing with some clarity where the Genesis 3 approach to education has always been destined to lead us.

Yet even in the running of this sad, tragic, and entirely predictable course, God is glorified.

His Word is demonstrated to be the unbreakable thing that it has and will always be.

His Lordship over every realm and area of life is yet again proclaimed, even as we cling to pride, tradition, and the many idols that continually preach and encourage our continued embrace of the serpent’s pitch in Genesis 3. In practice, we are determined to prove the serpent’s approach to education to be the right approach to education…even as our culture circles its grave.

Wrapping an American flag around a satanic approach to education doesn’t make it a less satanic.

This is why God has so clearly and lovingly provided us with detailed instruction when it comes to children’s education.

When we obey His perfect, loving word, we will find true life, peace, prosperity, and freedom for ourselves, our children, our culture, and our civilization.

When we reject His Word on education in favor of a State-run, satanically inspired alternative approach, we weaponized our own children against the very values we claim to desire.

When we ship our little girls and boys off to systems for indoctrination in which even the concepts of “boy” and “girl” are intentionally clouded and undermined, we have no business whining about the culture going to hell around us.

We have no one to blame more than ourselves if we continue to feed our children to the beast.

It is time to stop allowing our little ones to be programmed and weaponized by the enemy.

It’s time to get them out of public schools.