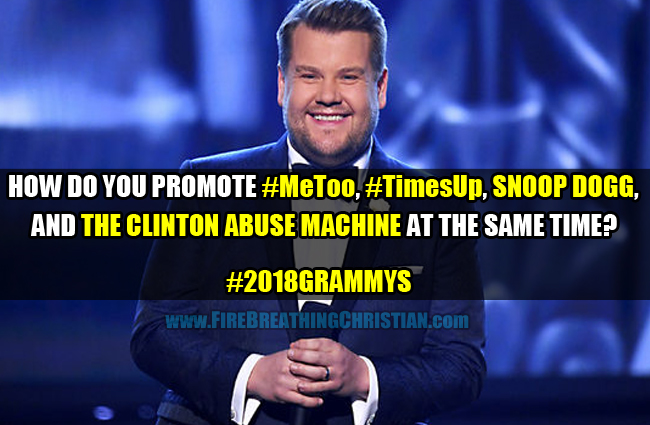 It takes a special kind of moron (or, in this case, group of morons) to even attempt to simultaneously promote #MeToo, #TimesUp, Snoop Dogg, and Hillary Clinton, yet that’s exactly what we got from the good “Progressives” running the music industry these days. While this sort of thing fits with the brazenly hypocritical and bizarrely delusional approach we’ve come to expect from Clinton/Dogg advocates, there is a silver lining to this tragi-comedic story.

One of the very good things about the intensely evil/stupid 2018 Grammys is that the event showcased and highlighted for all the world to see a complete and irreconcilable disconnect between a little thing called “reality” and the “Progressives” riding atop the terminally deluded zombie dinosaur that is the music industry.

Put another way, the trainwreck of an event that was last night’s “celebration” of music aimed at shaping the culture in an ever more “Progressive” direction, well, that event did far more to proclaim the ultimate end of the zombie dinosaur in question than it did to add any credibility or vigor to its very old and very tired shtick.

Even mainstream media was abuzz today with expressions of “shock” (shock, I tell you!) as to how an industry so obviously dedicated to pimping and promoting the likes of Snoop Dogg could dare make such clumsy appeals to the #MeToo and #TimesUp movements literally in between (and sometimes in conjunction with) appearances by Snoop Dogg and (multiple promotional pitches of) Hillary Clinton, who everyone with two brain cells to rub together knows would without hesitation sacrifice any woman who had the misfortune of being sexually assaulted/raped by her husband and then tried to #MeToo about it.

Sure, we all know that “Progressives” can be very slow at times, but is there really a Leftist girl or woman on earth who doesn’t think that Hillary and Bill would sacrifice them in a hot nanosecond if there was any chance that they were going to pose a problem for Clinton political ambitions by, say, sharing a #MeToo moment describing how Bubba sexually assaulted or raped them?

We all know that, in practice, the Clinton family hates women.

We all know that to the Clinton Machine (and to many of the “artists” and “art” being celebrated last night), women are tools to be used, abused, discarded, and maligned at will.

This fact is roughly as well documented and substantiated as the notion of gravity…yet the “Progressives” just can’t seem to admit or own up to it.

The radical decentralization of culture-shaping media power is coming, and much sooner than most may even believe possible.

In that context, we should all thank the 2018 Grammys for speeding things up a bit.