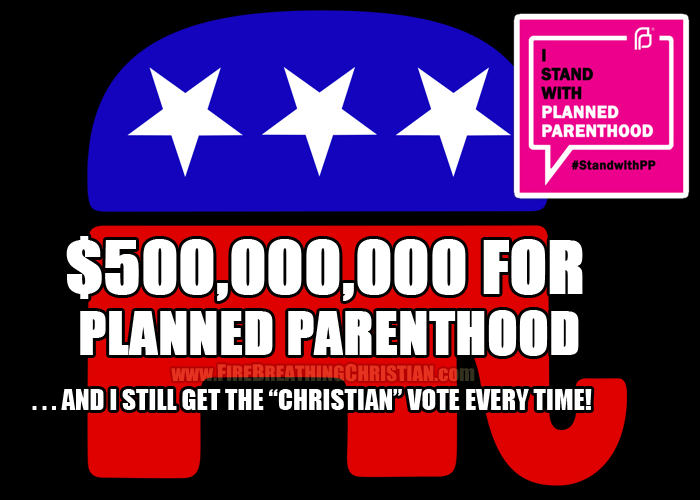 For those convinced that the Democrat Party is clearly the greater evil when compared to its Republican counterpart, I respectfully offer the following question for your consideration:

Is “the lesser evil” political party the one that openly campaigns for things like the mass murder of babies through operations like Planned Parenthood, or the one that claims opposition to the same while actually funding Planned Parenthood to the tune of half a billion dollars taken-by-force (stolen) from those who earned it?

Put another way, which party is more effectively advancing the cause of baby murder, the one that openly advocates its ‘legality’ and encourages its practice, or the one that siphons off massive amounts of financial support and political energy from those who want to end baby murder in the land, while actually supporting baby murdering enterprises like Planned Parenthood in political and economic practice?

Which party is more evil?

Which accomplishes more for the cause of ‘legal’ baby murder in America?

In light of the recent abomination of a spending bill promoted by most Republicans and signed by President Trump, which funded Planned Parenthood to the tune of half a billion dollars, could it be that the Republican Party is at least as evil as the Democrat?

Something to think about while the GOP-funded mass murder of babies goes on all around us…and while 2018 campaign material featuring boisterous claims of opposition to abortion is being prepped by Republicans for election season.